The Asian Rich List Midlands 2015 was revealed at the Asian Business Awards Midlands on May 15th, 2015, during a glitzy celebration at the Edgbaston Cricket Ground. DESIblitz reports.

"It is an inspiring picture and one that should energise entrepreneurs everywhere."

The Edgbaston Cricket Ground was once again host to the Asian Business Awards Midlands on May 15, 2015.

Alongside the celebration of key individuals across the Greater Birmingham region, the glamorous event also witnessed the formal announcement of the Asian Rich List Midlands 2015.

The combined wealth of the 51 Richest Midlands-based Asians who made the list, amounts to a total of £4.37 billion. This is an increase of £60 million from the previous year. 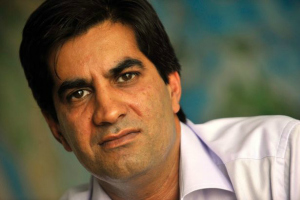 Considering the economic woes which the UK has been experiencing, the figures from the Asian Rich List Midlands show the resilience of Midlands-based British Asian businesses.

For the third year running, food manufacturers Ranjit and Baljinder Boparan top the list, with an estimated wealth of £1.35 billion.

Despite economic setbacks, the husband-wife team, who own Northern Foods and 2 Sisters Food Group, have increased their wealth by £50 million.

Lord Swraj and Angad Paul find themselves in second place, also for the third consecutive year. They are owners of the Caparo business empire. In addition Lord Swraj Paul is a peer in the House of Lords.

The Pauls have an estimated wealth of £725 million. The company has seen a net fall over the last 12 months of £25 million. 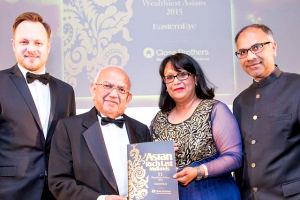 The Top 10 were largely unchanged. Positions one to six were the same as the previous year.

The biggest movers were were Anup, Nitin, and Pankaj Sodha, who jumped from 10th in 2014 to 7th in 2015. Their wealth is estimated at £82 million, which is a £15 million increase from the previous year.

The trio of brothers run pharmaceutical company Lexon, which delivers drugs to over 1200 independent pharmacies and major groups in the UK.

Here is a list of the Top 10 richest Asians in the Midlands:

As well as officially announcing the Asian Rich List Midlands 2015, the primary purpose of the Asian Business Awards Midlands 2015 was to crown business champions in each of the respective industry fields.

Here are the winners of the Asian Business Awards Midlands 2015:

Now in its third year, the Asian Rich List Midlands has been published by Eastern Eye under the Asian Media & Marketing Group (AMG) banner, since its launch in 2013.

AMG Executive Editor, Shailesh Solanki was one of the panel of four experts who has studied British Asian wealth of the last twelve months. 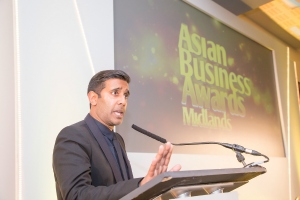 Mr Solanki said: “The list shows the remarkable resilience and diversity of Asian businesses in the UK.

“Despite the challenges of the general economy many business leaders in the community have seen opportunity and potential and moved quickly to capitalise.

“It is an inspiring picture and one that should energise entrepreneurs everywhere.”

AMG’s Group Managine Editor, Kalpesh Solanki, added: “The enterprising spirit and the crucial role of entrepreneurs is vital not only to the economy but to society as a whole as it serves to inspire the next generation of businessmen and women.

“It is this attitude that will drive the economy forward, fundamentally creating jobs and giving families value and sense of purpose.”

The honouring of those who have made the Asian Rich List Midlands 2015, and the winners of the Asian Business Awards 2015, is a sign of how crucial the British Asian economic contribution is to the economy of Britain’s second city.

Furthermore, with concerns about the UK being too London-centric, it is clear that the contribution that the provincial cities such as Birmingham make to the nation’s economy and cultural life is vital.

If the economy is going to recover successfully and we are to see periods of sustained economic growth in the future, the entrepreneurial zeal displayed by these pioneering British Asian businessmen and women will be crucial.