"It’s local, desi and a practical solution to issues in the vicinity."

Instead of the participant dumping a bucket of ice water over their heads on camera, she has challenged others to donate a bucket of rice to someone in need.

It was started by Manju Latha Kalanidihi, who is a journalist from Hyderabad in central India.

She hopes to encourage others to help the poor and promote the importance of charity.

Manju says on her Facebook page that: “It’s local, desi and a practical solution to issues in the vicinity. Instead of wasting water on ice bucket challenge, save water and feed the hungry.”

The new version of the existing challenge has been described as an Indian version for Indian needs. 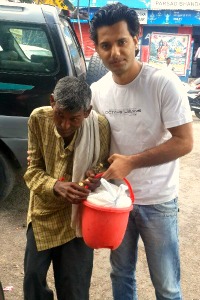 So far it has proved a hit, and it has gained over 48,000 likes on Facebook in five days since the project was started, and that number is rapidly rising.

Its popularity is perhaps unsurprising, considering more than a quarter of the world’s undernourished population live in India, according to The World Food Programme.

It is also estimated that 30% of the Indian population have to survive and feed themselves on less than £0.75 a day.

The Rice Bucket Challenge has potential to spread worldwide, as it is not just India whose citizens face poverty and malnutrition.

According to the Hunger Project, 1 in 8 people in the world does not have enough to eat. More shockingly, 1 child dies every 10 seconds from hunger-related diseases.

The simple act of giving food to another helps to raise awareness of these statistics, and to encourage a greater sense of charity within a community.

Participants are similarly nominating those that they would like to see complete the challenge next.

The campaign has now asked high profile Indian CEOs and celebrities to complete the challenge, to help awareness of the project to continue. 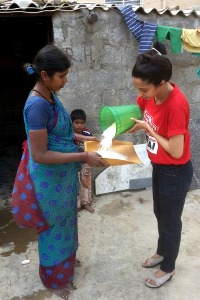 Those who take part can also donate other kinds of foods, or even medicine, to those less fortunate than themselves if they are willing.

Speaking about the success of the challenge so far, Manju said: “It has a small incentive – post a photo and get liked… but from Sweden, from Australia, from America, people came up with their own little versions. I sat up the whole night… It is like a social media tsunami. Exponential…

“I hope Indians take it up in a big way and make ice bucket challenge a secondary phenomenon,” she adds.

The Ice Bucket Challenge had previously received such widespread success due to the reason behind its creation: raising awareness for ALS (also known as motor neurone disease.)

In August 2014 alone, it has helped to raise over £48,000,000 for ALS charities, with donations and challenges still ongoing.

The success of the Rice Bucket campaign is expected to continue, due to the equally worthy message behind the challenge.

Rachael is a Classical Civilisation graduate who loves to write, travel and enjoy the arts. She aspires to experience as many different cultures as she can. Her motto is: “Worry is a misuse of imagination.”
Bollywood Stars do Ice Bucket Challenge
Apple releasing iPhone 6 and iWatch together