The celebs of B-Town including Sunny Leone, Akshay Kumar, and Abhishek Bachchan have taken part in the popular Ice Bucket Challenge to raise awareness for ALS, a motor neurone disease.

Sunny Leone also took the challenge after being nominated by her Twitter followers.

Bollywood has caught up with the viral trend of ‘The Ice Bucket Challenge’.

The activity of pouring a bucket of ice cold water over your head is an awareness campaign for ALS (amyotrophic lateral sclerosis, or Lou Gehrig’s disease).

ALS is a motor neuron disease and is the most common type.

It is characterised by muscle stiffness, rapid weakness in the muscles, difficulty in speaking, swallowing and breathing. 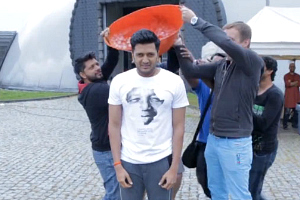 A large number of A-list Hollywood celebrities have already conducted the challenge and challenged their friends and colleagues and shared their videos online via social media.

Now our Bollywood celebrities are rising up to the challenge by posting their ice bucket challenges on-line too.

Rumour has it that the challenge came into Bollywood when tennis player Sania Mirza nominated her actor-friend Riteish Deshmukh.

This was after her second attempt of doing the challenge, as people argued she didn’t use a big enough bucket the first time! 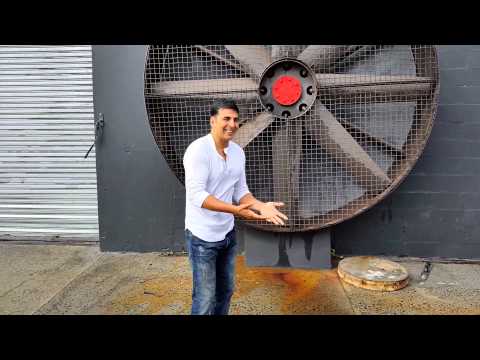 Riteish accepted the challenge whilst filming for his new film Bangistan in Poland.  His challenge was posted on Facebook with the caption: “I accepted Sania Mirza’s ALS Ice Bucket Challenge, to spread the awareness for ALS (Lou Gehrig’s Disease).

Akshay Kumar accepted the challenge whilst in Cape Town shooting for his reality dance show. 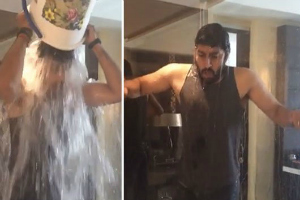 He said: “I had asked only 1 contestant to help but all 11 of them got ready to help me. All of us believe in helping each other. I am using sea water because I don’t want to waste good water.”

Poor Akshay had 11 buckets of water thrown at him. He nominated his wife, Twinkle Khanna, Ashvini Yardi, Salman Khan and Johnny Lever.

Our favourite nominee so far has to be Abhishek, who accepted the challenge inside the privacy of his own bathtub. His reactions to the cold water will have you laughing out loud. Abhishek went on to nominate his father, Amitabh Bachchan, Shahrukh Khan and the entire Happy New Year Team.

Pulkit Samrat accepted his challenge from Riteish with an interesting black and white video. He went on to nominate Sonam Kapoor, Jacqueline Fernandez, Richa Chadda and Ali Fazal. 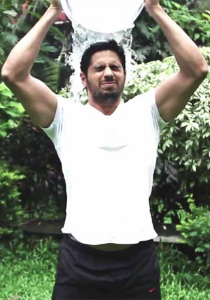 Sonakshi Sinha took to Instagram with the challenge. With one ice cube in a bucket, so as to not waste water she nominated everyone to take part and eagerly told her audience to donate.

Bipasha Basu took to her Instagram too, even though she was sick with a cold she took a small bucket of ice water and completed the challenge. She challenged Rocky S and Raj Kundra.

Adult turned Bollywood beauty Sunny Leone also took the challenge after being nominated by her family and Twitter followers. Taking it like a pro, the star nominated Yo Yo Honey Singh.

We’re all excitedly waiting for the nominees who haven’t took the challenge yet. Will the big stars like Amitabh, Shahrukh and Salman accept their challenges?

Will the ‘pretty girls’ Sonam, Jacqueline, Deepika and Priyanka do their bit for the good cause?

How about directors/producers Farhan Akhtar and Karan Johar? Will they step up to the challenge to fight for this cause? Only time will tell!

So far the ice bucket challenge has raised money for both the UK Motor Neurone Disease Association (£250,000) and the ALS association in the USA (£37.7 million).

It’s nice to see that our B-Town stars are taking part to raise awareness too! But similar to the words of Mr SRK, ‘Yeh toh sirf nominations hain, challenges abhi baki hai mere dost!‘ Who do you think should be next?