The hilarious trailer for Total Dhamaal’ (2019) releases with positive vibes. Join this elite ensemble for an epic adventure filled with total fun.

"Can't wait for you guys to join me on this fun laughter riot!"

The trailer for Total Dhamaal (2019), featuring an all-star cast is like going on “the wildest adventure ever.”

Fox Star Studios uploaded the trailer on January 21, 2019, with some positive responses making the rounds.

The third film of the franchise is a direction of Indra Kumar. Kumar was previously director of Dhamaal (2007) and Double Dhamaal (2011).

Comedy icon, Johnny Lever (Jinghur) will give yet another rib-tickling performance as he is also part of the cast.

Not only that, Devgn, who will also serve as co-producer, revealed Hollywood’s much-loved primate, Crystal the Monkey will make her Bollywood debut.

Ajay tweeted an image with Crystal standing on his shoulder with the caption:

Crystal is a 24-year-old Capuchin monkey, known for her roles in the Night At The Museum franchise and The Hangover Part II (2011).

She will play Ajay’s (Guddu) companion in the film. Total Dhamaal (2019) is definitely the right film for Crystal’s first Bollywood film. 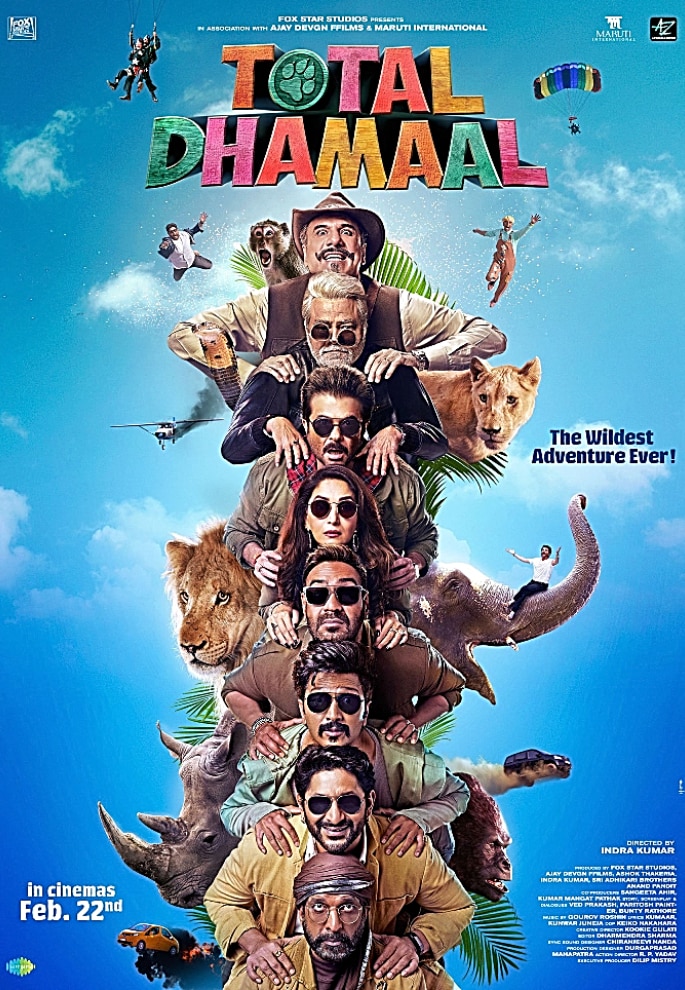 The filmmakers released a teaser on Jan 14, followed several light-hearted posters between January 18 and 21, 2019, before releasing the official trailer.

After watching the trailer, it is safe to say fans are in for a treat. Viewers will get to see plenty of funny moments, perfect for all of the family.

Taking the trailer into account, the film appears to be about a race for 500 million rupees (£5.4 million).

A big group of individuals split into smaller teams in pursuit of the prize.

Teams take different routes as they race for the money, which is hidden in a place called Janakpur.

The Dhamaal originals, Arshad Warsi and Javed Jaffrey will partner together as will Riteish Deshmukh and Rajpal Yadav (Munna).

It seems as though Ajay Devgn and Sanjay Mishra (Jonny) will form a team and the Beta (1992) Jodi of Anil Kapoor and Madhuri Dixit making another. 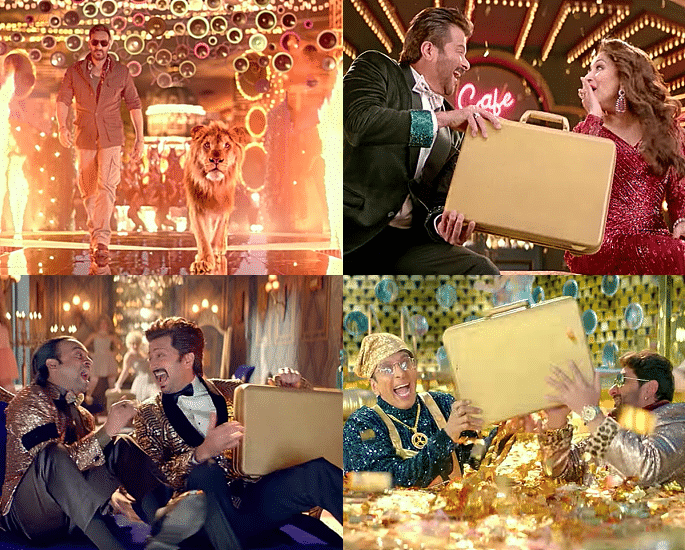 Each team contemplate how their lives will change if they manage to find the money first. All of them keep dreaming about living lavishly.

As Madhuri says “may the best man win,” the teams can be seen racing for the treasure. Along the way, the characters encounter different wild and exotic animals.

The trailer is filled with high-octane action and light-hearted fun with hilarious expressions as well as perfect dialogue delivery.

The trailer displays the excellent special effects used in the film. 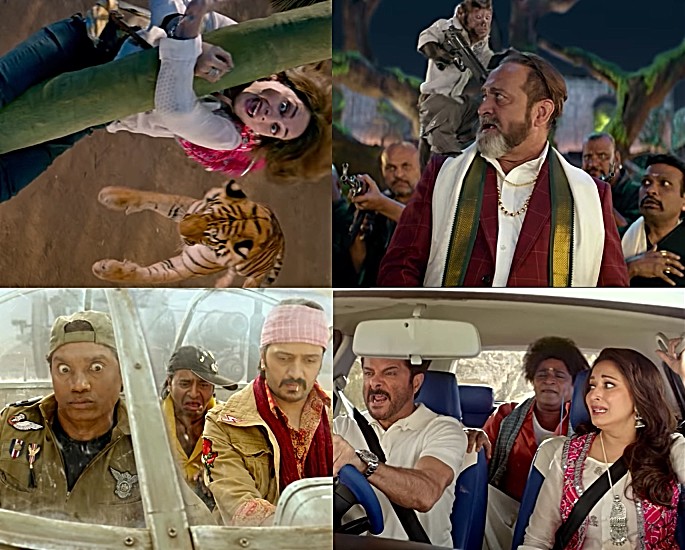 Originally the film was scheduled for a December 2018 release. However, due to the extensive visual effects, the release date was pushed back.

“There are lots of special effects in it and it was consuming a lot of time.

“Makers also felt that if they release the film in December then it wouldn’t be nice for the film as there are some big releases in that month.

“They didn’t want to compromise on anything that is the reason why they shifted it to February next year.” 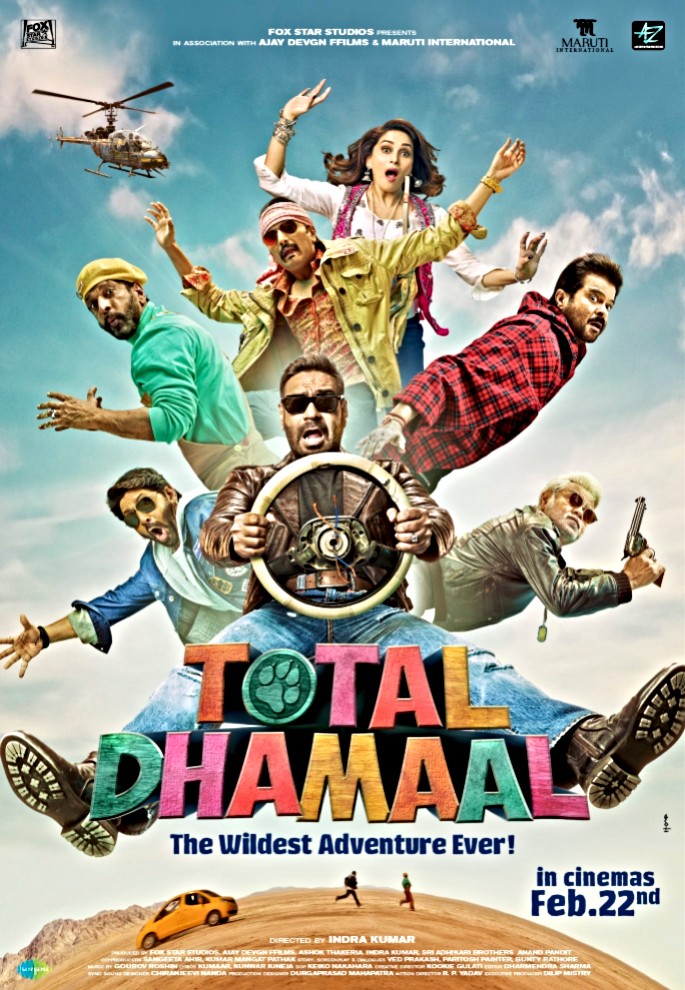 Additionally, the audience gets several glimpses of dazzling musical numbers including an item number by Sonakshi Sinha.

Saregama Music will produce the soundtrack with Gourov-Roshin composing. Kumaar and Kunwar Juneja are the lyricists for the film.

Aamir Khan who gave a Muhurat clap (first take) also has a cameo role in the film.

When asked about what it was like to be working with such a star-studded cast, the director of the film, Indra Kumar told  Mumbai Mirror:

“It was more nostalgic as I was teaming up with Ajay, Anil and Madhuri after a long time.”

“There was no trouble getting any of the actors on board because their tracks had them laughing out loud.

“It took just one narration to get the cast in place. And as a director, I’ve played to everyone’s strengths.” 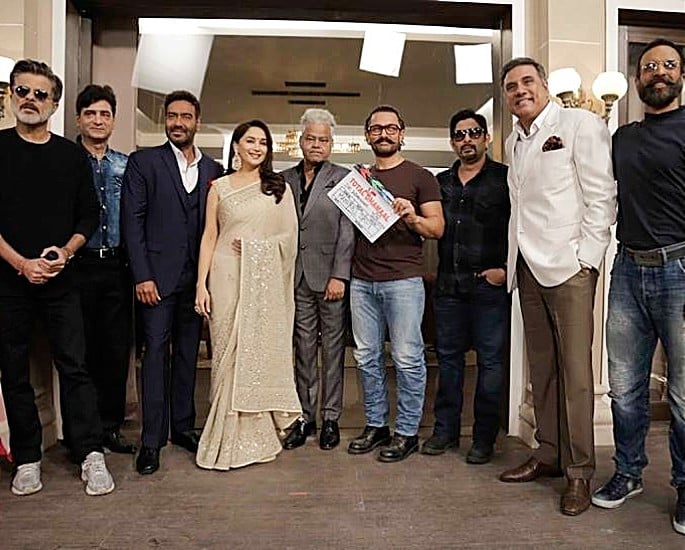 A fan on Twitter impressed by the special effects tweeted writing:

Anil Kapoor did share photos from the Total Dhamaal (2019) trailer launch event on his Twitter, along with a caption reading:

Madhuri Dixit looking stunning in a yellow top and white flared trousers, tweeted a couple of photos prior to the trailer launch, expressing her excitement:

“All set for the #TotalDhamaal trailer launch!”

“Can’t wait for you guys to join me on this fun laughter riot! Bas thoda aur intezaar”

All set for the #TotalDhamaal trailer launch! ??
Can't wait for you guys to join me on this fun laughter riot! Bas thoda aur intezaar ? pic.twitter.com/oiNovpmm0h

In a video uploaded on Twitter by Bollywood Hungama, film critic, Joginder Tuteja complimented the cast, the comedy elements and the special effects: 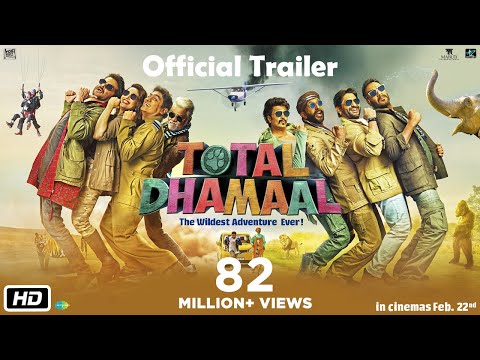 Prior to the release of Total Dhamaal, Anil Kapoor prepares for the monumental film, Ek Ladki Ko Dekha Toh Aisa Laga (2019). This is Anil’s first film starring with his daughter, Sonam Kapoor, who will lead the film.

Madhuri will also team up with Alia Bhatt, as well as Sonakshi Sinha, Varun Dhawan Aditya Roy Kapur and Sanjay Dutt in the period drama, Kalank (2019).

Jakir is currently studying BA (Hons) Games and Entertainment Design. He is a film geek and has an interest in representations in Films and TV dramas. The cinema is his sanctuary. His motto: “Don’t fit the mould. Break it.”
10 Successful British Pakistanis in TV and Media
Sunny Leone accused of Not Returning Rs. 5 Lakh to Producer