Madhuri Dixit stole the hearts of millions through her finesse dancing and expressions. DESIblitz presents you 13 best dance numbers by MD!

“Both Madhuri and Sanjay's knees were bruised and bleeding"

When the pristine Madhuri Dixit began her career with Rajshri Productions’ Abodh (1984) a critic commented:

“Madhuri excels in her role as a young naive bride who acquits herself well as the naive village girl and does not realise what marriage actually entails.”

Since then, the prima donna has excelled with each and every performance.

Whether it’s essaying the role of happy-go-lucky Nisha in Hum Aapke Hain Koun (HAHK) or the vigilante in Anjaam, MD has proven to be one of Hindi cinema’s finest artists.

Plus, with her frequent collaboration with choreographer Saroj Khan led her to become the most-popular dancing diva in Bollywood.

As Chandramukhi in Devdas, she mentions:

“Yoon nazar ki baat ki aur dil chura gaye. Hum toh samjhe the budh, aap toh, dhadkan suna gaye. (You talked about sight and stole my heart … I thought you were a statue, but you made me hear a beat).”

This strongly reflects the feelings of every guy in the world, not just by Madhuri’s beauty, but also by her performances!

DESIblitz presents the most spellbinding performances of Madhuri Dixit!

In this iconic song, we see Madhuri aka ‘Mohini’ wearing a pink-sequined crop-top and multi-colored skirt.

But it’s her mischievous expressions which are the biggest highlight of the performance.

The choreography was so popular that maestro Saroj Khan received the Filmfare for ‘Best Choreography’ and Madhuri received her first nomination in the ‘Best Actress’ category.

Madhuri’s Indian fisherwoman ‘look’. Her moves during the chorus are very staccato.

Yet it is her smile and the hair-flicking which charms the audience. 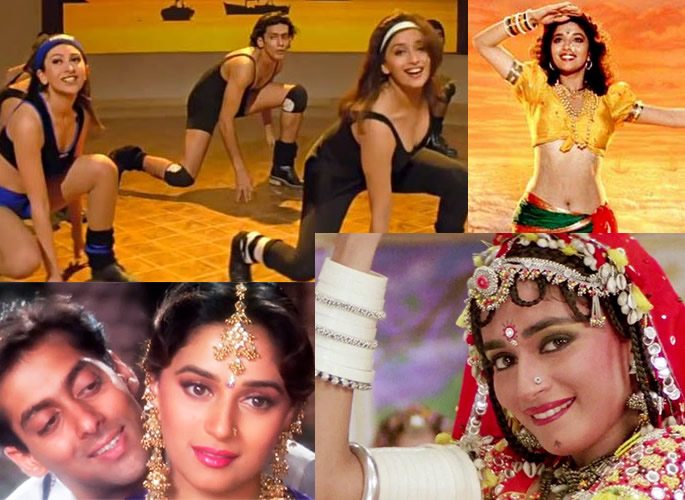 Unlike some of Madhuri’s previous dance numbers, ‘Tamma Tamma’ was quite quirky and choreographed by Saroj Khan yet again. You won’t believe how eventful it was to the execute the song! According to Saroj, the final shot got approved the 48th time:

“Both Madhuri and Sanjay’s knees were bruised and bleeding. But they weren’t ready to listen. They said, ‘No masterji we will do it.’

“We decided to give it another shot, which finally got okayed in the 48th take after the cap decided to stick in its desired place,” says Saroj.

Well, it was certainly worth it!

The song which defined Madhuri as the ‘Dhak Dhak’ girl. One sees Madhuri wearing an orange backless choli and saree while her dance moves were seductive yet innocent.

Madhuri mentions how this iconic song was shot over five days: “This was added last minute to the movie. I had to leave for an outdoor (shoot), so we had to finish it in that little time slot. We were shooting at a neck-break speed. We never even knew that it was gonna be this big!”

Plus, the setting and choreography style reminds us of ‘I Love You’ from Mr India! Truly, Kya lagti hai vah re vah!

This was a song which most certainly raised eyebrows due to the obscene, suggestive nature of the lyrics. Her mischievous expressions will make anyone say: “Haay Chhori!”

Furthermore, the movements with the skirt (before the crescendo) were just outstanding. Definitely MD’s most exemplary performance.

But the beauty of the dancing diva is the fact that the vulgarity of these songs are never emphasised through the choreography.

The chorus step for this song is a thumbs up with straight arms and simple thumkas. That’s Madhuri Dixit, Simple yet elegant.

Joy Borade was awarded the National Award for ‘Best Choreography’.

His dance composition was praised as ‘a graceful and aesthetically pleasing choreography, contemporary and yet traditional in its adherence to Indian cultural practices’.

The song is also famous for the iconic pose, where Prem (Salman Khan) throws a garland through a slingshot at Nisha (Madhuri). Watching this banter and Madhuri’s enthusiastic performance will make your rise in love! 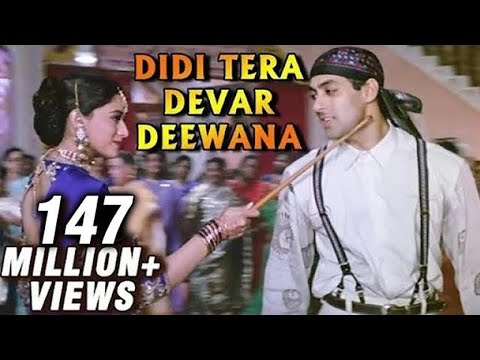 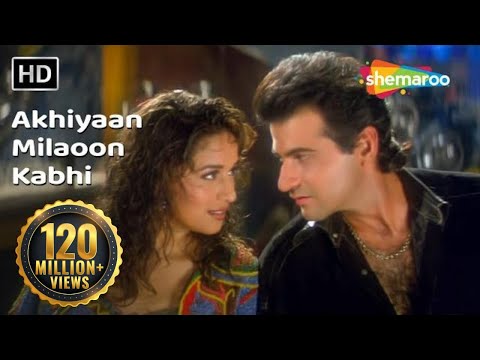 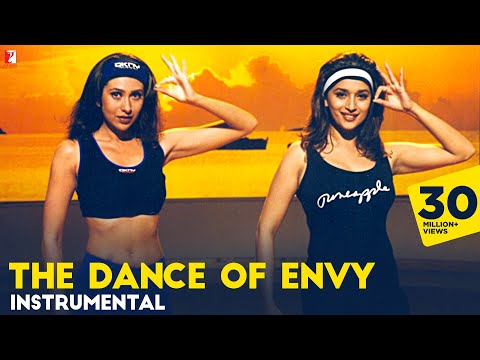 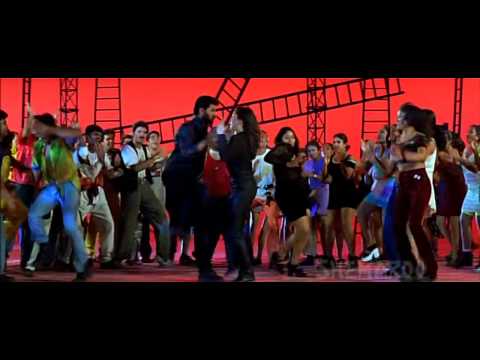 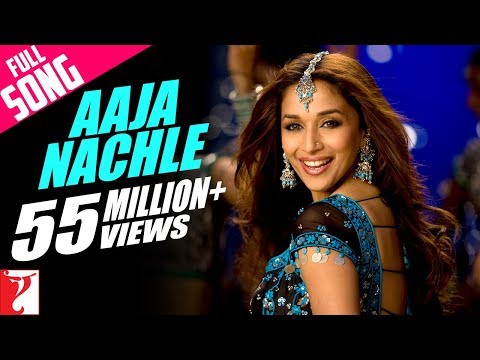 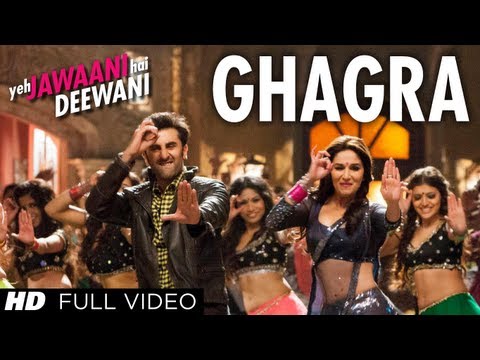 After traditional Masaledaar performances, we see Madhuri in a majorly contemporary, street-style avatar in ‘Akhiyaan Milaoon’.

As the lyrics suggest, the song is majorly about the eye expressions and Madhuri performs exactly that!

In awe of the song, Anubhav Shrivastava writes on YouTube: “I was 4 yrs old when the song came and it used to be my most favourite song… Madhuri Love you.”

The beauty of this dance is how Madhuri’s subtle steps become energetic after Karisma takes over the routine. One of the best dance-offs in Bollywood!

On YouTube, Abdiqayum Mujahid positively comments: “I both love them. They are my favourite actresses.”

Karana on MouthShut applauds: “Its got some mind-blowing choreography (by Prabhu Deva), delicious sets and lighting (the black over red backdrop is invigorating) and Madhuri dances like a dream.”

One simply cannot move their eyes off the screen when the music begins. It literally becomes a ‘Jo Bhi Ho So Ho’ moment! 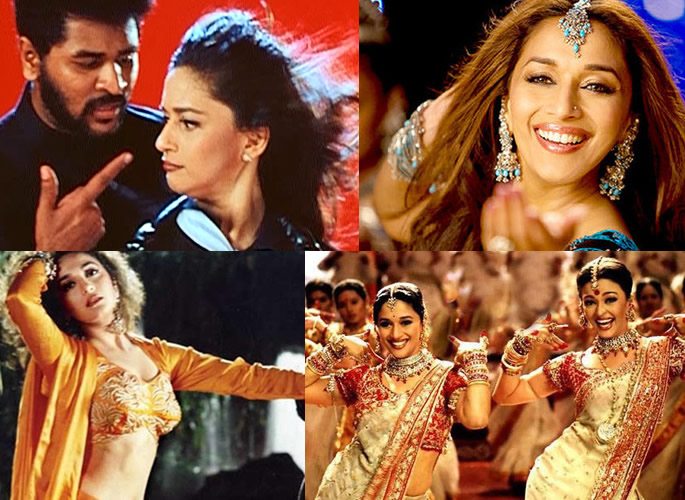 When you thought the jugalbandi between Madhuri and Karisma was eye-pleasing, Dola Re Dola is just on another level.

This is the first time Aishwarya Rai Bachchan and MD performed together on-screen and it became a legendary song sweeping several prestigious awards!

In an interview, Madhuri herself mentions: “Dola Re Dola was two women dancing together. My association with her (Saroj Khan) has been so long, the way she has choreographed it and Sanjay Leela Bhansali has picturised it (with the use of various trolley and long shots) was really fun.”

After a 5-year hiatus, Madhuri returned to the silver screen with this excellent Sunidhi Chauhan track.

Her blue and black outfit and Vaibhavi Merchant’s stylish dance-composition knocked everyone out of their seats.

Plus, Vaibhavi was also awarded the IIFA award for ‘Best Choreography’.

Loving the song itself, Radio Mirchi writes: “It has a touch of local ‘tamasha‘ and Rekha’s voice sings the song in her typical way. With whistles and ghungroo sounds, the singers make it a fun number.”

This just shows how Madhuri can perform with any actor, regardless of age.

Overall, selecting 13 performances of MD’s goldmine of several is a challenge. Nonetheless, these are a few tracks which have truly established Madhuri Dixit as the real dancing diva in Hindi cinema.

Anuj is a journalism graduate. His passion is in Film, Television, dancing, acting and presenting. His ambition is to become a movie critic and host his own talk show. His motto is: "Believe you can and you're halfway there."
10 Best 1990s Bollywood Love Songs
10 Punjabi Vinyl Records you Must Have