The scenery is also immense, especially when it shifts to winter.

Marvel’s Spider-Man: Miles Morales is the next web-slinging adventure from developers Insomniac Games but this time, gamers get a new story with a new hero.

While it is not a direct sequel to 2018’s Marvel’s Spider-Man, it shares the same universe.

The 2018 game is one of the most impressive titles for the PlayStation 4, combining an immersive story with detailed environment.

Throughout that game, Miles Morales was an important character and gamers got to see the origin of how Miles eventually will become Spider-Man.

Now in 2020, he has his first solo game and it looks to be just as incredible as the first game.

For those unfamiliar with Miles Morales, in the comics, he assumes the mantle of Spider-Man after Peter Parker’s death when he is bitten by a spider which has DNA formula containing Peter’s blood.

With the game set to arrive on November 12, 2020, we look at the new title and what to expect.

The Perfect Introduction to the PS5 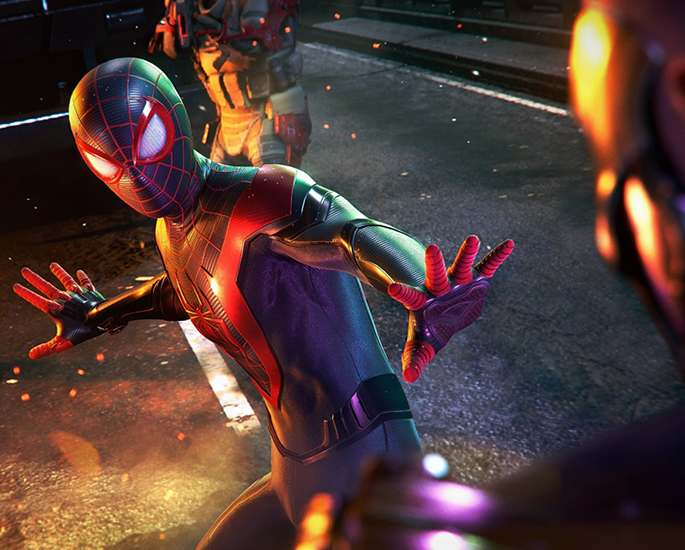 While Marvel’s Spider-Man: Miles Morales will be released for the PS4, it will also serve as one of the first exclusives for the new PS5.

As a result, it can be argued that it provides the perfect introduction to the next-generation console.

Once the game starts, players will get to see the level of detail on each character. One thing which stands out is the new hair strand system.

Not only does it handle different types of hair but each representation is high quality. The way light plays off the hair strands and the way it moves when characters show emotion is an upgrade from the previous title.

Facial features like eyes and teeth as well as screen-space shadows have also increased in quality.

While characters are incredibly detailed, it is the representation of New York City where the PS5’s capabilities really shine.

There is more activity among pedestrians and vehicles, making it feel like a bustling city.

The scenery is also immense, especially when it shifts to winter.

Incredible light displays, park decorations and detailed window displays are just some of the things to expect as well as snow.

When playing missions, there is more going on also. Compared to the previous game, Miles Morales has new, higher-resolution surfaces, making for an ideal game to test out the new console. 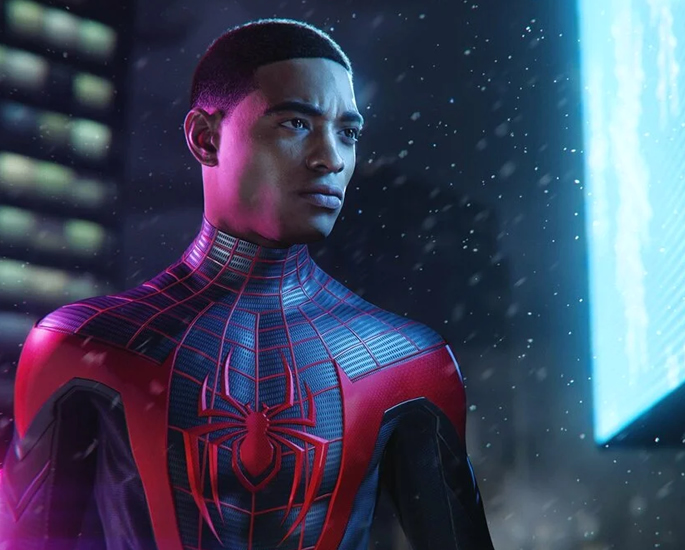 While most major details have not been revealed in order to make for bigger surprises upon release, the story takes place a year after the first game’s conclusion.

Miles, who was bitten by a genetically-enhanced spider, has trained under Peter Parker and has taken on the role of Spider-Man, despite the lack of experience.

Throughout the story, he tries to maintain a balance between supporting his mother Rio Morales’ City Council campaign and defending the city from a gang war between the Roxxon Energy Corporation and a high-tech criminal army called the Underground, led by the Tinkerer.

Peter advises Miles to be like his late father and follow the path to becoming a hero for New York City.

Players get to web-sling across New York as they did in the previous game but they also get to experience Harlem for the first time, which is where Miles lives.

While Miles Morales is not as packed with content as the original, it still provides an essential story to the Marvel PlayStation franchise.

It also makes for a more selective set of missions and interactions rather than repeating the same task multiple times. 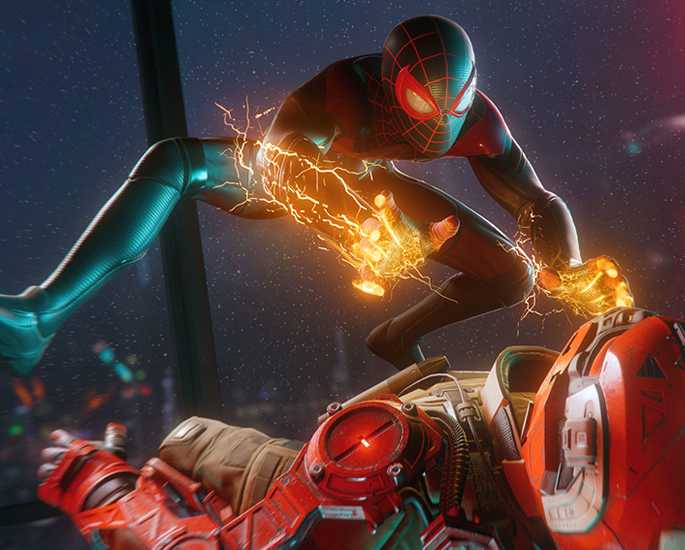 Like the previous game, swinging across the city for Miles is the same as it was for Peter. This also includes basic attacks and defences.

Beyond the fundamentals is an array of features in order to make Miles stand out as his own character.

Swinging from building to building is just the start as the animation shows the less-experienced Miles navigating across the city. He will even spin around on his own web to reorient himself at times.

However, he has features that Peter cannot match like the bioelectrical attacks which offer more variety and look cool.

Bioelectricity attacks can be used after charging a meter during combat. They pack a lot of punch but that’s not all.

Some Venom attacks tend to focus on one enemy, while others allow for crowd control. Some can help get an air combo while warding off enemies.

Combining them with Miles’ basic attacks adds more a variety and looks stylish.

Combat is enhanced when using the PS5’s DualSense controller as the crackle of electricity discharging around Miles is simulated via its haptic feedback.

Gamers will feel a rumble before it is sent from one side of the controller to the other.

Another aspect is Miles’ cloaking ability which allows him to become invisible for short periods of time after charging another meter during combat.

It can be used to confuse enemies or lets you get away if the combat gets tough. It also allows for a stealthy approach if you choose to take that route.

While the basics are largely the same, it is the other elements which give Miles Morales his own identity as a character. 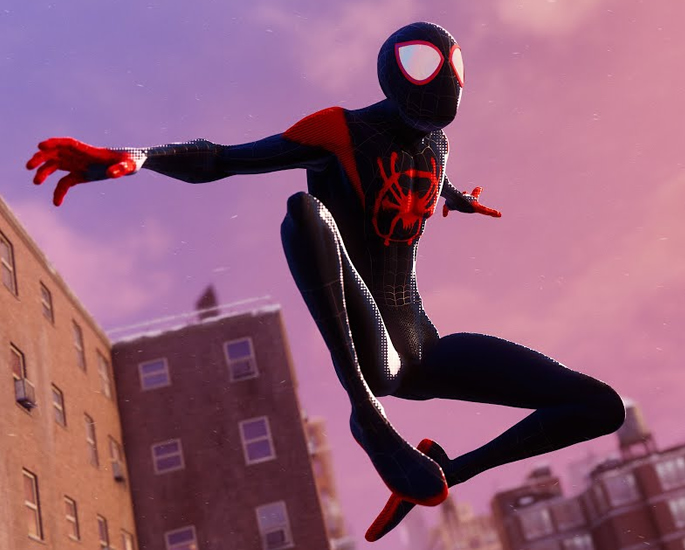 In the 2018 game, there was a whole host of suits that gamers could change into, depending on what skills they wanted.

This is the same in Miles Morales and while there is a smaller pool of suits, the various powers mean that it is likely that players will constantly switch between them throughout the story.

Depending on the situation, there is a multitude of suits to unlock which have different powers to make things a little easier.

Whether it is the main story or side-quests, this improvement will prevent combat from ever feeling stale.

It will also make unlocking them feel more meaningful and make the story more interesting.

Full combat situations could mean powerups which lend more damage while stealth approaches could call for a powerup which scans and auto-identifies enemies.

One talked-about suit which will be in the game is the Into the Spider-Verse suit from the 2018 film.

Not only is the suit virtually identical but the animation style from the film is replicated in the game.

Miles Morales may just be starting off as a superhero but his upcoming solo game proves that Insomniac Games is fully invested in transforming its standalone hit into a series.

Marvel’s Spider-Man: Miles Morales looks to have taken the already excellent features and enhanced them, especially for the PS5.

It may not be as extensive as the first game but every aspect feels more essential.

While it does not release until November 12, 2020, for the PS4 and November 19 for the PS5, reviews for this new title are generally favourable.

This stylish action-adventure superhero game is a great addition for the PlayStation and one which is bound to throw out a few extra surprises when it comes out.

Dhiren is a journalism graduate with a passion for gaming, watching films and sports. He also enjoys cooking from time to time. His motto is to “Live life one day at a time.”
5 Best PCs Ideal for Working from Home
Actress Kajal Aggarwal looks to inspire Women Gamers