PS5 vs Xbox Series X: What to Buy

With the new generation of consoles just around the corner. We compare the PS5 and Xbox Series X and which one is best for you.

It is a futuristic design which has certainly divided opinion.

Gaming giants Sony and Microsoft announced that their new consoles, the PS5 and Xbox Series X, are just around the corner.

News surrounding both consoles came in 2019 but in 2020, gamers got to see the consoles being unveiled.

They mark a new generation in gaming as they are the successors to the PS4 and Xbox One. Both consoles were extremely popular, with millions being sold worldwide.

However, now the PS5 and Xbox Series X will come with more advanced technology to make gaming even more immersive than it already is.

As there is not too long before both consoles release, we compare the features to help you decide which one is the best for you. 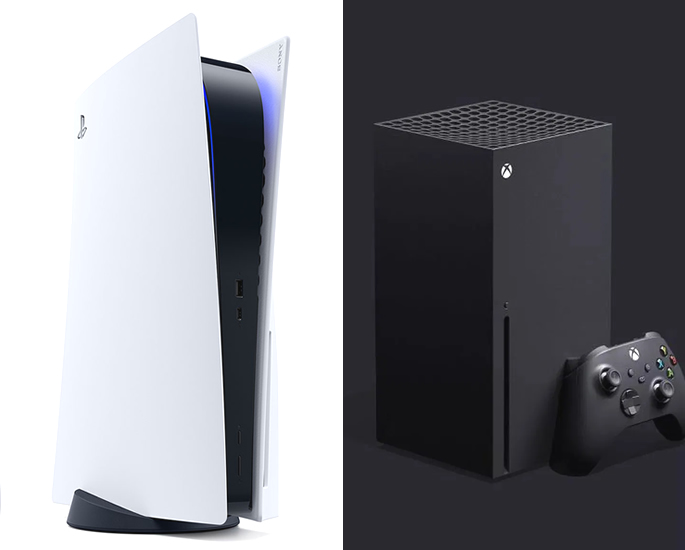 The PS5 design was officially unveiled on June 11, 2020, at the end of the reveal event.

It revealed a striking design, moving away from the ‘black box’ designs of previous PlayStation consoles. Instead, it has a curvy mixture of black and white plastics with blue highlight lighting.

The PS5 also has USB-C charging for controllers. It can even make use of an HD camera accessory, media remote and new wireless headset.

It is a futuristic design which has certainly divided opinion.

It has an upright tower design like how a gaming PC would be, however, Microsoft has said that the console can sit horizontally or vertically.

The console is black with slightly indented cooling vents on the top with a green light inside.

The Xbox logo sits on the top left-hand corner while the disc drive is also placed on the same side.

The Series X has numerous ports. It has an HDMI 2.1 output port, three USB 3.2 ports, one networking port, an expanded storage slot and a power input port.

Both consoles look completely different to their predecessors but their striking designs are sure to entice gamers. 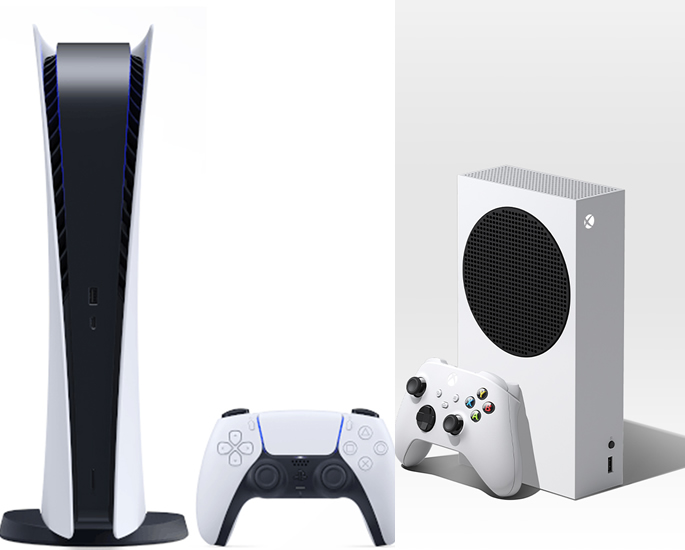 Both Sony and Microsoft presented surprises to gamers when they announced that another console would be released alongside.

The PS5 will also have a Digital Edition which is a disc-less version of the standard console.

It will boast the same specs as the standard PS5 but in a more streamlined package.

Sony is banking on gamers to make use of digital downloads and streaming services as opposed to buying games or films.

Like Sony, Microsoft announced an alternative option called the Xbox Series S, which also does not have a disc drive.

The Series S is not as powerful as the Series X but it is up to 60% smaller, making it the smallest Xbox ever made.

One of the most important factors when buying a gaming console is the price.

However, the PS5 Digital Edition is an affordable alternative as it will cost £359.99.

The PS5 Digital Edition may be more expensive than the Series S but it still has the same power as the main console.

However, the cheaper price may be more enticing if gamers are willing to sacrifice some performance.

With new consoles comes an array of advanced technical specifications. 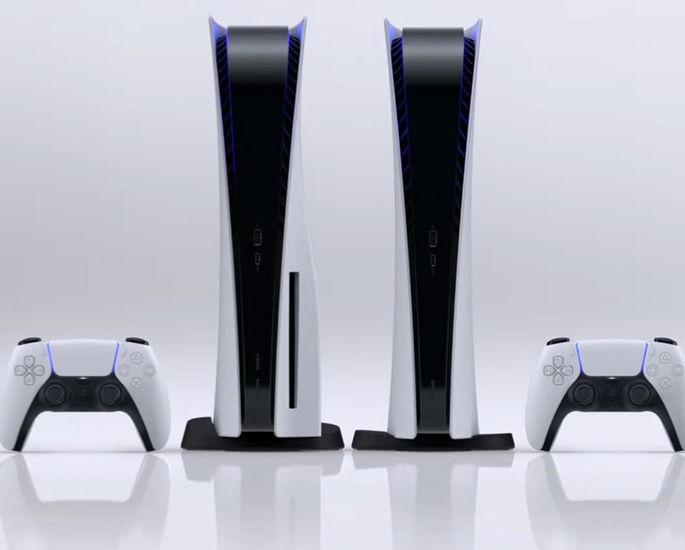 The SSD is vital to the PS5 experience. Internal storage will be built in at 825GB for the SSD which is less than the Series X but just as clever.

SSDs load faster and allow for bigger open worlds within games as it allows system memory to be used more effectively.

Load times will be reduced and booting up from standby should be generally much faster also.

Gamers will also have more control over installing and removing games, meaning that a game’s multiplayer can just be installed. This allows for the launch of direct gameplay.

The PS5 will use AMD’s Zen 2 CPU processor technology with eight cores, delivering 3.5GHz frequencies which are a massive jump in performance over the PS4.

The PS5 will have 3D audio support thanks to the new Tempest Engine.

For example, the console would be capable of letting gamers hear individual raindrops in relation to where their character is as opposed to a single audio track.

At a Sony strategy meeting, it indicated that the Tempest Engine may define the console as a whole.

The slide read: “By installing a customised 3D audio processing unit in PS5, we have made it possible to deliver diverse and sophisticated 3D audio experiences.

“Players can experience sound that moves in from front to behind, above to below, and all around them.”

While the PS5 will not support all PS4 accessories, it will support most of them.

The DualShock 4 controller will work on the console but only for supported PS4 games.

Those with an officially licensed racing wheel, arcade stick or flight stick can use them for games on the current-gen and next-gen PlayStation consoles.

PlayStation VR will continue to work with supported PSVR games. 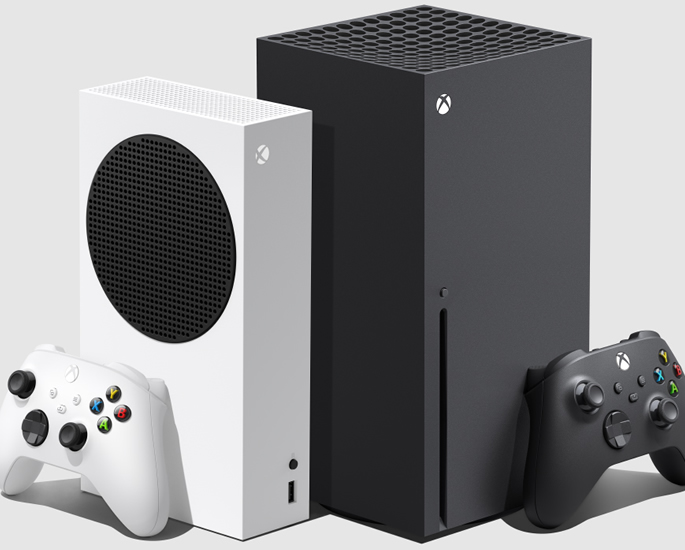 The processor is a customised AMD Zen 2 CPU with eight cores and 16 threads, with a peak speed of 3.8GHz, and a base speed of 3.6GHz.

However, these frequencies are not fully locked, suggesting that the power of the CPU can be adjusted based on workload and thermals.

Even though 4K is the aim, Microsoft has said that the console has 8K capability.

If that is the case then expect crisp, flawless display when playing video games.

The aim is to have games running at 60 frames per second (FPS) in 4K but it will support up to 120 FPS too.

Variable Rate Shading prioritises effects on different in-game characters and objects for a “more stable frame rate and higher resolution”, according to Microsoft.

Games could be bigger as well as better. In an interview, Samsung said it is in talks with Microsoft and pushing them to adopt ultrawide support for the Xbox Series X.

However, nothing has yet been confirmed.

The Series X will make good use of having an SSD.

A ‘Quick Resume’ feature for the console will let players “almost instantly” continue with multiple games, without the need to sit through load screens.

According to Microsoft, “ALLM allows Xbox One, Xbox Series S and Xbox Series X to automatically set the connected display to its lowest latency mode”.

Microsoft has confirmed that all current Xbox One accessories will work with the Xbox Series X, including existing controllers and headsets.

That means that the Xbox Elite Wireless Controller Series 2 will be forward compatible with the Series X.

But Microsoft is also launching a next-generation wireless controller to accompany the new console. 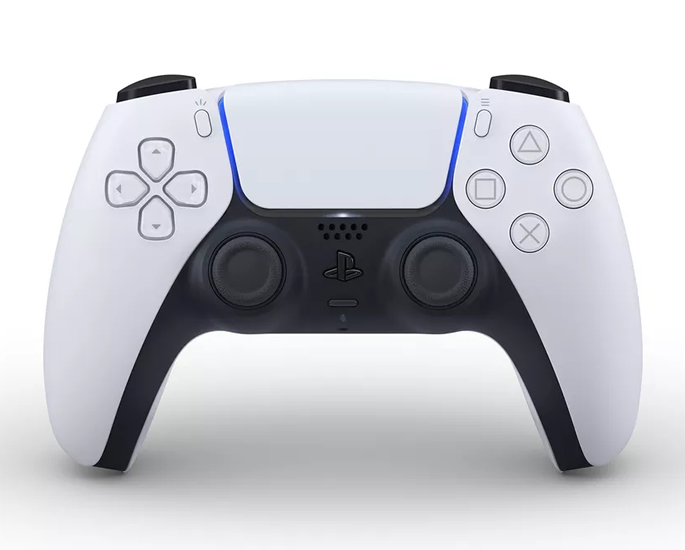 The PS5 will come with the DualSense controller which will enhance gaming.

For example, the L2 and R2 shoulder buttons are adaptive. This means that players will feel the tension of their actions, like drawing a bow to shoot an arrow.

It will have a microphone inside the controller, allowing gamers to get rid of their headsets when communicating. 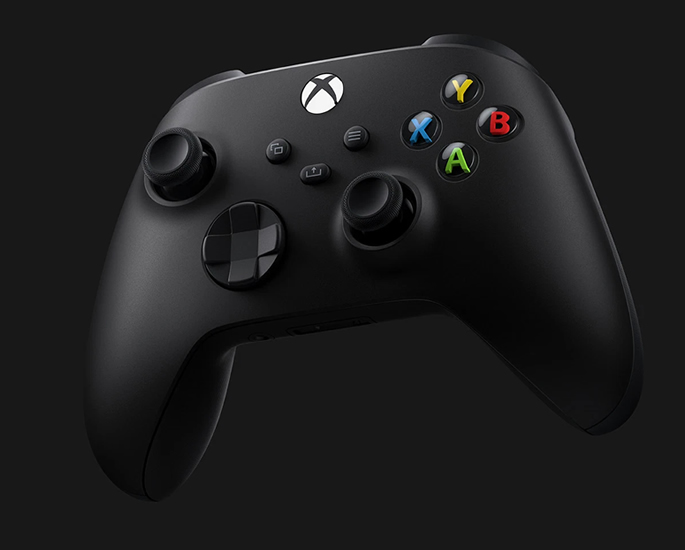 The new Xbox Wireless Controller will be more accessible and its design has been refined.

Along with enhanced accessibility, the controller will have a share button that will let gamers share screenshots and videos with friends.

Microsoft has also revealed that it is optimising latency in the “player-to-console pipeline” starting with the Xbox Wireless Controller, through a new feature called Dynamic Latency input.

According to the company, this feature “synchronises input immediately with what is displayed”, making controls “more precise and responsive”.

When it comes to picking between the two consoles, it really depends on what the person wants for their own gaming experience.

Both offer hours of usage and enjoyment with its powerful software, ensuring seamless gameplay.

They expect to have long lifespans as its predecessors did and with new games, updates and accessories, the PS5 and Xbox Series X will be the most advanced consoles on the market.

Dhiren is a journalism graduate with a passion for gaming, watching films and sports. He also enjoys cooking from time to time. His motto is to “Live life one day at a time.”
FIFA 21: What to Expect from the New Game
Indian Gamers talk Gaming & PUBG Ban in India