The changing spectacle of Diwali

Diwali is the festival of lights and the start of the Indian New Year. It is commemorated globally and the way this special occasion is celebrated has changed dramatically with the times.

The awareness of Diwali in the UK has increased immensely

Diwali (also known as Deepavali), is a popular time in the Indian calendar. In particular, it is celebrated by the Hindu, Sikh and Jain religions. Being the start of the Indian New Year, its celebration takes place around the world with all kinds of festivities to mark the occassion.

Diwali is associated with light and often called the Festival of Lights. This is the reason why candles and divas are lit up in houses to mark this special time.

From a Hindu religion perspective, Diwali is known for the home coming of Lord Rama and Lord Laxman and Sita Ji after their exile. This well-known story from the Ramayan dating back to 1500 B.C (4th Century B.C.), tells how King Dasarath had promised his favourite queen, Kaikeyi two wishes: firstly, her son to become heir to the throne, and secondly, Lord Ram to be banished into exile. This wish enabled Kaikeyi’s son, Bharath, to rule whilst Sita Ji (Lord Rama’s wife) Lord Rama and his brother Laxman were sent into exile. 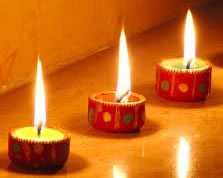 During exile Lord Rama triumphed good over evil by vanquishing the demon-king Raavan. The return of Lord Ram, Sita Ji and Laxman is marked by the celebration of Diwali, because at that time oil lamps were lit up on their way home, as there was no moon.

Diwali in the Sikh religion celebrates the return to Amritsar of the sixth guru, Shri Hargobind Ji, after he set free 52 Hindu kings imprisoned in Fort Gwalior by defeating Emperor Jahangir. In association with this victory by the guru, Sikhs also refer to Deepavali as Bandi Chhorh Divas, “the day of release of detainees.”

In Jainism, Diwali marks the Nirvana Kalyanaka of Lord Mahavir. Gautam Swami, the chief Ganadhar, had done the true worship of Lord Mahavir. He got the Omniscience- the ultimate knowledge after the Nirvana of Lord Mahavir. In the absence of Mahavir Swami, he lamented so much that his soul became free from all the bondages of Karmas. For Jains, Diwali time is the ‘New Year of Your Life.’ 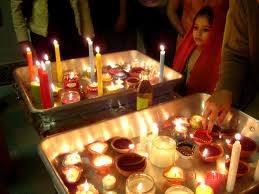 Each year, Diwali celebrations vary on the dates of the calendar. This depends on the moon cycles. In the month of November, Diwali starts on a New Moon day. The celebration of Diwali is as old as the history of India. Diwali is celebrated in public or as a private family occasion.

Diwali celebrations take place two weeks before the festival. Three to four days before Diwali new outfits are tailored, lots of tempting food is prepared, and fireworks and gifts are bought for children. Families make a trip to the jewellers for good luck. Friends and families exchange sweets and Jalebis are a very popular sweet for Diwali.

However, people are changing the way they celebrate Diwali. People used to create long chains of chillies on their lanes. Neighbouring houses used to compete in whose cracker lasted the longest. Nowadays, residential areas often set a time limit after 10pm for excess noise. Mothers used to have plenty of time to make tasty Indian sweets (mithai), however, now sweets are readily available at specialist shops. Also, people are more health conscious and do not perhaps indulge in many sweets as the past!

People are meant to light real divas and candles around their houses but nowadays people buy battery operated/electric light decorations. Large families use to meet and hand each other gifts personally. But today large families disperse far and wide, and time is short. Relatives shop online and transport gifts overseas during celebrations.

Commercialisation of Diwali is evident like many of the other festivals in the South Asian calendar. 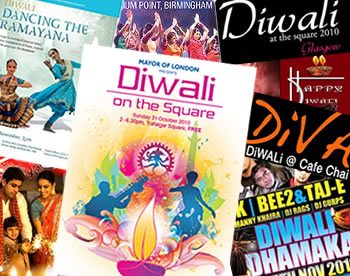 Diwali cards are now readily available which were not heard of in the past. Shops stock Diwali ornaments, specially labelled gifts and small clay divas. Diwali e-cards are a mouse click away and the popularity of sending Diwali greetings by SMS has become the norm.

The awareness of Diwali in the UK has increased immensely. From it being once a very private and personal festival for Indians living in the UK, it has now become an event celebrated by especially organised functions up and down the country. Schools are teaching the story of Diwali much more prominently in the currliculum and children of all cultures are engaged to celebrate the event in schools to promote multi-cuturism.

Major cities in the UK mark the occassion with a council supported event usually with large firework displays. In London, events like, ‘Diwali on the Square’ takes place in Trafalgar Square, where dance troops showcase their work, prayers are sung. Divas and lights are decorated everywhere, followed by an evening of spectacular fireworks. 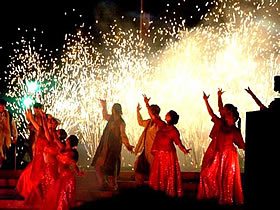 New events like processions are being organised to celebrate Diwali in the UK. An example is a colourful procession starting from the National Maritime Museum in Greenwich and finishing at the Royal Observatory supported by a Bollywood Brass Band. Smaller functions include British Asian restaurants hosting live music and dinners, club dance nights and ‘dhoom-dhaam’ parties during the Diwali period.

Many would like to see Diwali as a national holiday like in India but that may not be viable due to so many other religions in the UK also wanting the same for their special days.

Looking back at the Diwali over the years, it has gone through many changes. Times have changed because societies have changed. People have become more health conscious, extended families are not as common, relatives are dispersed far and wide and so it is not always easy to get together these days. In the years to come, we will see what factors further change the way we celebrate Diwali.

Smriti is a qualified Journalist with an optimistic take on life, enjoying sports and reading in her spare time. She has a passion for arts, culture, bollywood movies and dancing - where she uses her artistic flair. Her moto is "variety is spice of life."
DSC South Asian Literature Festival
The Story of Tamasha