A teenage army cadet from Solihull has been hailed a hero for saving the life of a man who had been stabbed in a car park.

"I knew that I had to assert myself and take control."

A teenage army cadet has been praised after he used the skills he had learnt to save a stabbing victim’s life.

Nasim Ahmed had been volunteering at a charity dinner in Small Heath, Birmingham when a woman rushed in. She screamed for help as her partner was being attacked in the car park.

The victim had confronted a car thief but was stabbed twice.

Nasim, aged 16 at the time, grabbed a medical kit from the event and rushed to help the man.

The Hall Green Army cadet applied pressure on two six-inch stab wounds to control the bleeding until an ambulance arrived.

Nasim recalled: “Things like this have an impact on you, it’s a life-ending before your eyes.

“A woman came in, screaming that her boyfriend was being attacked and someone was trying to steal his car.

“I used rags to put pressure on the wounds and found someone to keep his girlfriend calm. Everyone was panicking around me and I knew that I had to assert myself and take control.

“I was starting to freak out myself but I’m trained in Army etiquette so I knew I had to push those feelings aside and focus on tending the wounds.

“Being in the cadets for four years has taught me how to stay level-headed and take charge when I need to.

“Despite what some people might think, I’ve always been a bit of an outcast and while all of this was going on I was in the middle of my GCSE exams.

“But people were listening to what I had to say because I’d asserted myself and shown them that I knew what to do.”

Nasim explained that he was concerned that the attacker would return.

“We didn’t want him coming to try again. But you can see the fear in someone’s eyes when they feel like they’re in their last moments – and that really focuses you.

“It felt like every second was a minute while all of this was going on. I knew that I’d only be able to give him a few minutes until the ambulance arrived – but a few minutes can make all the difference.”

The attack had resulted in four arteries being severed. Fortunately, the victim went on to make a full recovery.

Now 18, Nasim has received the Young Hero Award at Pride of Birmingham 2020.

West Midlands Police and Crime Commissioner has also praised him, describing our winner as a role model to all.

He said: “Nasim’s actions showed bravery beyond his years.

“His courage and first aid skills were crucial in saving a man’s life. Without Nasim’s intervention, the story might have been very different. Nasim is a great role model for other young people – he is an example to us all.” 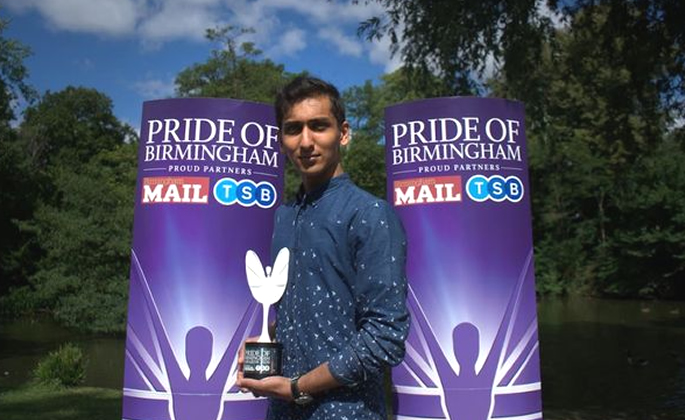 The army cadet spoke about receiving the award.

“I’m very grateful and humble to be receiving this award.

“I hope that I will be able to make a change with this – because this attack is one of many.

“Seeing yourself covered in somebody’s blood like that changes you.

“I got very lucky in this situation, being in the right place at the right time, but I know many others have not had the same luck.

“As much as I love our city, knife crime is a huge problem here. Young people are losing their lives every day.”

“Gun violence is a huge problem here too. You hear about people getting arrested with guns all the time.

“The events of that day are just something I want to move on from, as much as I appreciate the award. This hasn’t been the last time I’ve known someone be in a knife attack in Birmingham.

“There needs to be a serious change.”

Nasim had been working towards becoming a police officer, however, lockdown halted his plans so he is using the time for self-reflection.

He explained: “I completed a year at college and was on track for becoming police office but during lockdown, I’ve been doing some self-reflection.

“The attack is still something I’m trying to move on from. I was only 16 at the time and seeing that changes you as a person.

“I’ve been trying to keep myself occupied with some new hobbies, such as producing music videos. I’ve also been buying bikes online, fixing them up and selling them. Everyone seems to want a bike right now.”

Dhiren is a journalism graduate with a passion for gaming, watching films and sports. He also enjoys cooking from time to time. His motto is to “Live life one day at a time.”
Man jailed for Hammer Attack on Ex-Partner’s New Boyfriend
US Indian Woman murdered while out Jogging