Sewa Day 2014 saw a multitude of volunteers and schools participate in countless social action programmes across the globe. Recognising their incredible achievements both locally and internationally were the Sewa Pioneer Awards held at the House of Commons.

Celebrating the incredible charitable acts of the British Asian community, the Sewa Pioneer Awards honoured the local contributions of community members and volunteers and the services they have provided over the last year.

Taking place at the House of Commons and hosted by radio presenters, Sunny and Shay, the event saw guests arrive from all aspects of the British Asian community, and were even joined by Prime Minister David Cameron.

A traditional Indian concept, ‘Sewa’ is the process of giving without any expectation of return. Using this idea on a community platform, Sewa Day (a global charity known as ‘Selfless Day’) encourages young people from schools and local communities to volunteer their time and efforts to help and support others in need. 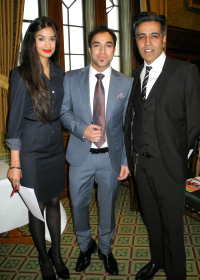 Through local projects, many students and volunteer groups are involved in social care programmes which encourage them to be kind and generous to others.

The annual Sewa Pioneer Awards, now in its fifth year, recognises and celebrates the hard work of these volunteers and the numerous social service projects they are involved in.

The 10 awards in total were distributed between 5 local and international schools and 5 volunteer groups dedicated to helping others. Chairman of Sewa Day, Arup Ganguly said:

“The awards are a great opportunity for us to honour true community pioneers: the inspiring groups and individuals who have worked hard to make a real difference in their community. I’m delighted that so many young people have embraced the key principles of our initiative; to relieve hardship and poverty, to bring a little joy and to help the environment.”

David Cameron added: “I wanted to come today because I think this organisation and what you are doing is something really special and valuable. The thing that gives me greater pleasure than anything else I do is seeing the amazing amounts of social action in our communities; the charity work, the voluntary work – people putting back into society.” 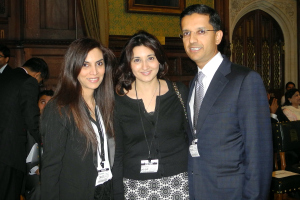 Of the celebrities that attended to honour the pioneers of Sewa Day were the likes of musicians Navin Kundra, Rishi Rich and Hemina Shah.

A big supporter of Sewa Day, Navin said: “It was a fantastic event rewarding and encouraging those who participate in Sewa Day and charity work.

“The amount of support received by such esteemed guests and MPs including the Prime Minister just goes to show how far Sewa Day has come and it is great to be a part of this initiative. I would urge everyone to get involved and participate. I meant what I said when receiving my award – you make a living by what you get, but you make a life by what you give.”

Music producer, Rishi Rich and his wife Dr Manrina Rhode Rekhi Rich presented one award to Kindergarten Starters from Dubai, for their incredible contributions. Speaking about the importance of Sewa Day, Rishi admitted:

“Performing kindness without the expectation of reward is something that should be commended and recognised for the very reason that you expect no reward. Its great that this has been set up to promote this to everyone.”

Here are the winners of the Sewa Pioneer Awards 2014:

Kindergarten Starters, Dubai – for hosting the first DEWA (Dubai Electricity and Water Authority) Workshop on Conservation, which was open to parents, staff and students from all the schools in the UAE.

GEMS World Academy, Dubai – for organising a project to collect toiletries, food and other necessities from the students to give to the workers of a labour camp.

Our Own English School, Al Ain – where pupils helped school staff clean the campus. Food items and clothing was collected and distributed to the vulnerable.

Exemplaris, Southall – for working with the Sikh Organisation for Prison Welfare, SWAT, British Heart Foundation, Specsavers, Brunel Sikh Society and Basics of Sikhi and with the help of more than fifty volunteers the team organised projects to benefit 1,000 people.

Om Group, Luton – for working at the Keech Hospice to make it a cleaner and brighter environment for both the residents and staff. At NOAH Enterprise, a homeless charity, volunteers helped re-arrange, clean and sort the food stock and storage facilities at the premises.

NHSF Manchester – for running a Navratri festival dance workshop, to the residents of Overton House care home, teaching them traditional dance and putting a performance on for the residents.

NHSF UK – for spending the day at Bhaktivedanta Manor temple in Watford working on a range of activities, including planting hyacinths, weeding, cleaning the pond, general ground cleaning and making cards for terminally ill children.

URI International, Uganda – for running a number of Sewa Day projects including one in Kampala, Uganda, planting trees, mangoes and potatoes at a school for the families of local prison workers and offered mentoring and career advice to the students.

Sewa Day 2013 saw 75,000 volunteers and schools participate in numerous social care programmes across the globe. With kindness and selfless generosity at its heart, Sewa Day will continue to make a big impact on local communities around the world. Congratulations to all the winners.

Aisha an English literature graduate, is a keen editorial writer. She adores reading, theatre, and anything arts related. She is a creative soul and is always reinventing herself. Her motto is: “Life is too short, so eat dessert first!”
Have South Asians Integrated into British Society?
Highlights of The Asian Awards 2014