Scientist invents Spray to Fight Covid-19 that NASA is Using

A scientist from Cheshire has developed a “breakthrough” spray to fight Covid-19. The spray is now being used by the likes of NASA.

“I’ve been obsessed with science from an early age"

A scientist has invented a spray to fight Covid-19 which is being used by NASA, after developing it in her parent’s restaurant.

It attracts and kills all pathogens on any surface it is applied to for 14 days.

The spray has been called a “breakthrough” and has been such a success, Sadia now has £10 million worth of orders.

Sadia began working on the spray after she postponed her PhD and worked in her parent’s restaurant, Cafe India.

She studied Covid-19 on a nanomolecular level for eight months and created different equations to find the formula to kill it.

Sadia used the restaurant as an initial case study and tested her invention on all surfaces to test its efficacy.

Voltique has been called one of the biggest breakthroughs of the pandemic. It has also been successfully trialled by the likes of NASA and the NHS.

It is now being taken on by several governments and blue-chip companies.

The spray is a nanoscale disinfectant barrier that can be used on all surfaces, making them 100% Covid safe for 14 days while saving up to 70% on staff cleaning and disinfectant bills.

On her love for science, Sadia said:

“I’ve been obsessed with science from an early age and as a child, I’d often ask for extra homework.

“My passion piqued at the age of 14 when my grandfather developed Alzheimer’s and from then on I have made it my mission to prevent the disease.

“I have a strategy to find an early intervention of Alzheimer’s however my restriction has been lack of funding, so I decided that by creating something like Voltique I could create a solution for Covid whilst funding my Alzheimer’s research at the same time.”

The scientist revealed that she studied Covid-19 while also researching existing disinfectants.

Sadia continued: “I have studied Covid-19 extensively and have also conducted a great deal of research on all common disinfectants on the market.

“I realised that there is a need for a solution that can be used on all surfaces but also one that kills the main body of a virus, killing all mutations and strains effectively.

“After months of research, I finally found the perfect formula and called it Voltique – a spray powered by electricity that kills all forms of Coronavirus, Ebola virus, Norovirus Avian Flu, Influenza A, Sars, HIV B and other pathogens that cause hospital-acquired infections.” 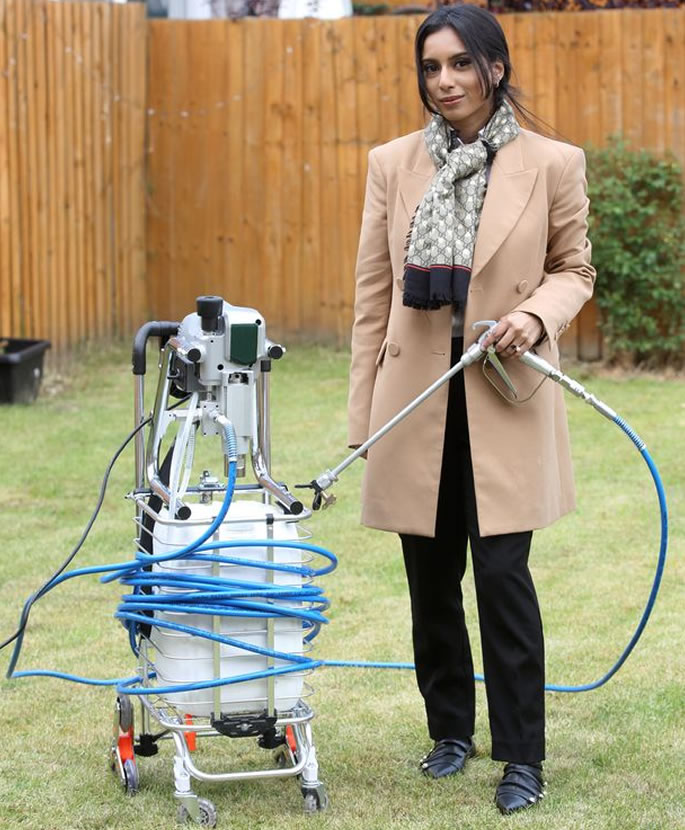 After creating Voltique, Sadia contacted Colin Hagan, a scientific innovation and development professional, to help get her product into the mainstream.

With the potential to save lives and save money, Voltique is currently being considered in 14 different countries.

Colin said: “The potential of Voltique is eye-watering and it could become a revolutionary product across all industries including medical, hospitality, aviation, marine and nuclear.

“The implications are massive, with every surface the spray is applied to being 100% Covid safe for 14 days following application.”

“It represents a huge step for Covid safety and it will save businesses money on disinfectants and cleaning hours too.”

“It’s been tested by the NHS, NASA and many independent labs globally, so people can be assured it’s safe and non-flammable – you can spray Voltique on an apple and eat it safely.”

Sadia’s business plan is now underway and with Colin as her mentor, she plans to roll out her product on a global level.

She currently has over £10 million worth of orders in the pipeline.

A partnership with charity tuff.earth is also being discussed in order to help achieve a global reach at the top level, whilst donating a percentage of profits to the charity.

“Our charity, whose Patrons include The Pope and Barack Obama, has been involved in a number of projects to combat the effects of the pandemic and this new groundbreaking innovation is one we’re 100% behind.

“During times of adversity the world needs more innovators and revolutionaries like Sadia Khanom and we’re going to do everything we can to help roll out her concept on a global level, whilst recognising her for such outstanding work.

“This young woman is an inspiration and stands to help countless people through her endeavours.”

Sadia added: “Naturally, I’m delighted that my extensive research has led to something so groundbreaking, but for me, it has always been about the intention and my passion for using science to make the world a better place.

“It is not about financial gain for me, but I am very excited about the prospect of making enough money to self-fund my Alzheimer’s research.

“I am determined to one day fulfil my dream of finding an early prevention of Alzheimer’s in the name of my Grandfather, so I can help save others from the same genetic disease that he has suffered from.”

Dhiren is a journalism graduate with a passion for gaming, watching films and sports. He also enjoys cooking from time to time. His motto is to “Live life one day at a time.”
Leeds Man raped Date after meeting on Shaadi.com
Sajid Javid appointed as UK’s new Health Secretary