According to researchers, there has been an increase in the risks of the deadly coronavirus spreading and making its way to India.

"It's better to observe self-quarantine for 28 days."

Researchers have said that India is among the top 30 countries at “high risk” from the spread of the coronavirus.

Coronaviruses are a large family of viruses that cause illnesses ranging from the common cold to more serious diseases.

This new disease, called novel coronavirus, originated in China when there was a pneumonia outbreak in Wuhan on December 31, 2019.

It is believed that it came from a seafood market, where wildlife was sold illegally.

China is the worst affected, with over 100 people dead and over 4,500 infected.

However, the coronavirus has made its way to other countries across the globe, including the likes of Germany and Canada.

When it comes to India, the risk has increased according to a study based on the number of air travellers predicted to arrive from the worst affected cities in China.

Researchers from the University of Southampton compiled a list of cities and countries they believe are at high risk and India is one of them.

While there have been no confirmed cases, many citizens are being kept under observation after returning to the country from China.

In Kerala, at least 80o people are being monitored as it is possible they were exposed to the coronavirus while they were in China.

Ten of them are under observation in isolation wards at various hospitals, the remaining are under home quarantine.

Health Minister KK Shylaja has urged those who have returned from China to avoid travelling and to remain under self-quarantine for 28 days. He said:

“In case they are suffering from cough, shortness of breath or have a low-grade fever, they must contact specially arranged medical centres at each district.

“There is no need to go to hospitals.”

On January 27, 2020, a three-member central team visited the state and held a meeting to discuss measures in order to prevent the coronavirus from potentially spreading to India.

At Thiruvananthapuram Airport, a thermal screening facility was opened on January 28 to scan passengers coming from China. 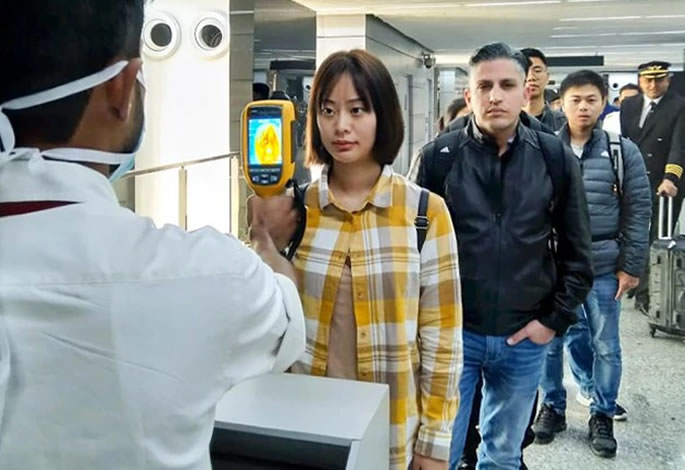 Several people in Punjab and Haryana are also being kept under observation after they showed symptoms.

“They have been quarantined and their families also put under watch.”

“Our district health teams are closely monitoring the health of the other three.”

Samples have been taken from two people and have been sent for testing.

Haryana Health Minister Anil Vij stated that measures were being put in place and that he did not want the situation to cause panic.

Every district in Punjab has been instructed to set up isolation wards and to conduct thermal screening at airports in case of emergency.

Despite there being no cases in certain states, there were three suspected cases in Delhi after three people had respiratory symptoms similar to the coronavirus.

The three citizens were taken to the Dr Ram Manohar Lohia Hospital and are under observation.

“There are three patients under observation. The virus hasn’t been confirmed yet but they are showing similar symptoms.”

While thermal screening and isolation units are two measures in preventing the virus from spreading, the AYUSH ministry stated that homoeopathic medicines could prove effective.

It was recommended that homoeopathic medicine Arsenicum album 30 could be taken on an empty stomach each day for three days. It will act as a prophylactic medicine to combat the virus.

The dose should be repeated after one month in case the coronavirus continues to spread.

General hygiene measures should also be taken such as thoroughly washing hands and avoiding touching parts of the face with unwashed hands.

The advisory also suggested citizens wear an N95 mask to avoid any transmissions through coughing or sneezing.

A spokesperson for the advisory said: “If you suspect Corona Viral infection, wear a mask and contact your nearest hospital immediately.”

The coronavirus has not spread to India but the risk has increased.

Across the world, the virus has caused disruptions. In some of China’s worst-hit areas, evacuations have been initiated. Flights have also been prevented from travelling to and from China.

In Wuhan, a full lockdown is in place, isolating the 11 million population from the rest of the world.

Dhiren is a journalism graduate with a passion for gaming, watching films and sports. He also enjoys cooking from time to time. His motto is to “Live life one day at a time.”
5 Exercises to Look Good in your Wedding Lehenga
10 Top Tips to Grow & Maintain Long Hair