Episode 9 of Indian Summers welcomes the Nawab of Jaffran to the Royal Simla Club. There is more devastating news and Ralph struggles with Cynthia’s meddling. DESIblitz has the full recap.

“I expect every dog in the district had his fun with her.”

Relationships and friendships come under strain in episode 9 of Indian Summers as more secrets and deceptions are unveiled.

Ralph, Alice and Aafrin are faced with difficult decisions, but will they come clean about their own lies?

DESIblitz has the full recap of episode 9.

Madeleine’s Loss and the Nawab of Jaffran

Episode 9 of Indian Summers opens on a sad note as Madeleine wakes to find her brother has died. 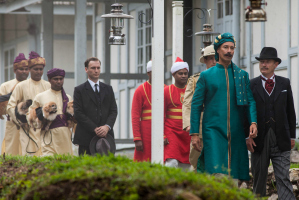 The ever-scheming Cynthia uses Eugene’s death to her advantage however, and encourages her to go back to America with her brother’s ashes.

A heartbroken Madeleine takes the hint and agrees, and Cynthia crosses off yet another innocent on her list.

But before Cynthia can gloat in her success, she finds that the Viceroy has invited the Nawab of Jaffran (played by Silas Carson) to the Royal Simla Club. The club has a strict ‘No Dogs or Indians’ policy but Cynthia agrees to take down the sign temporarily.

Ralph and Viceroy agree to welcome the Nawab to the Club like a ‘Gentleman’ as opposed to a typical ‘native’. In an unusual but fleeting moment of reflection, the Viceroy questions the actions of the British: “Did we slip up?” he asks.

He wonders if a little more civility would have improved relations between the two races. Cynthia however, has become even more racist if possible as she irritably states:

“Dogs and Indians. You’d think he was trying to make some kind of clever point.” 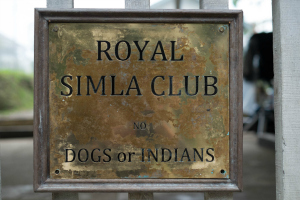 The eccentric Nawab however is completely oblivious to British superiority, and even encourages them to leave India as soon as possible.

But with his many English-isms, the Nawab is very much out of touch with his own people, and we wonder whether he is all that different from the British.

Following their break-up, Aafrin returns Sita’s love letters. Sita who is still bitter and heartbroken over the end of their relationship, catches onto Aafrin’s ‘English Missy’, aka Alice.

Sita laughs at his ‘stupidity’, knowing the kind of censure he could face if news of the illicit love comes out: “I pity you, really. They will tear you apart,” she says.

Before he can make his move on Alice however, he is waylaid again by the eerily mysterious Sergeant Singh, who is still holding Aafrin’s fate in his hands. 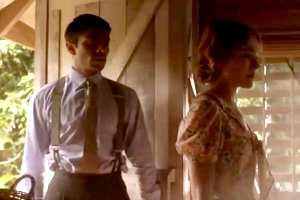 As it turns out Singh is one of the revolutionists and is spying on the British. He leads Aafrin to Miss Ayer (played by the immensely talented Ayesha Dharker).

Ayer is upset over Gandhi’s passive stance against independence. She is inclined to take a more forceful approach to get the British moving, and is looking to make Aafrin a new recruit.

A shocked Aafrin asks her how, and she responds: “By the bullet. The bomb.” Aafrin is not keen on her terrorist feelings and refuses to help in any way.

Later, Aafrin finally gets Alice alone, surprising her with a rose-covered bed in an outdoor shed. They consummate their love and Aafrin returns home with a smug smile of satisfaction on his face.

Ralph and Cynthia on the rocks

Alice who is desperate of being named and shamed over her estranged husband by a bitter Sarah, turns to Ralph for help, and he devises a way of getting Sarah out of Simla. The brother-sister bond is still strong between the pair but Ralph later asks her: “What are you so afraid of?”

When she responds with ‘love for her son’, Ralph grows even more remorseful over his own son.

But Adam’s feelings for his father have become clear. After sneaking into Ralph’s garden, Ralph finds him on the rocking horse. It’s a poignant reminder of what could have been if Adam had been brought up in Ralph’s home. 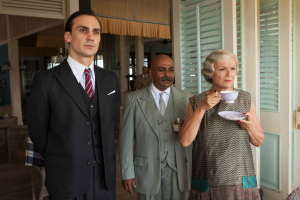 Ralph tries to welcome him, but a fearful Adam hands him a letter before disappearing, which reads: “You are Rakshas. You are my father.”

Later, in what becomes an epic dramatic encounter between the two, and one of the best scenes of Indian Summers so far, Ralph seeks out Cynthia to question her. Their mother-son bond is beginning to crack and it appears her meddling has gone a step too far.

When Ralph questions her about Madeleine’s departure and then Adam, Cynthia plays dumb but knows exactly what she’s doing.

We find that her scheming ways go beyond what Ralph originally thought and he blames her for Jaya’s downfall: “What did you think would happen to a pregnant, unmarried woman on her own with no one to protect her?”

Cynthia’s response: “I expect every dog in the district had his fun with her.” Fed up of Cynthia’s meddling, Ralph pushes her forcefully before storming away and we are left wondering whether he would have married Jaya if he knew she was pregnant.

Ralph later slyly mentions to the Viceroy that the Nawab got wind of the ‘No Dogs or Indians’ policy of the club and was deeply offended, which is why he was so difficult to negotiate with. The Viceroy asks: “Because of the club?” Ralph responds: “Yes, because of the club.”

Is Ralph’s revenge against Cynthia now complete? And what of Ramu Sood and Ian McLeod? The final episode of Indian Summers Series 1 will air on Sunday 19th April, 2015 at 9pm on Channel 4.

Aisha an English literature graduate, is a keen editorial writer. She adores reading, theatre, and anything arts related. She is a creative soul and is always reinventing herself. Her motto is: “Life is too short, so eat dessert first!”
Nominations for the IIFA Awards 2015
All-Star Cast for Zoya Akhtar’s Dil Dhadakne Do