The final of the beauty pageant Miss Bollywood UK 2009 was the deciding contest for one of the 14 finalists to win the crown to Bollywood.

The Miss Bollywood UK 2009 pageant held in Birmingham UK promised to be a platform for one individual with a dream of becoming a model and an actress in the very glitzy world of Bollywood.

The night at the prestigious International Convention Centre (ICC) in Birmingham was not just about showcasing a beauty parade, but to remind all invites that the final 14 contestants had made their way to the finals due to their great qualities and acumen. This final was the result of heats between 900 entrants.

“We wanted the contest to be as diverse as possible and attract contestants from all diverse backgrounds, which reflect Britain today.” 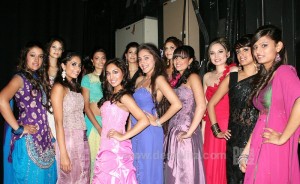 The process of selection gave these young women confidence in themselves, discipline and reminded them of qualities in them which they thought they never had. Therefore, the event demonstrated that young people can do anything they want, provide they put in the effort and time to make it happen.

“Miss Bollywood moves the concept of the beauty pageant forward to embrace artistes from Bollywood, Hollywood, and the UK with style and passion,” said councillor Alan Rudge, cabinet member for Equalities and Human Resources. 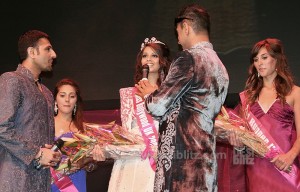 The hosts for the evening, were BBC Asian Network’s Love Bollywood presenters – Raj and Pablo. The duo are at the fore front of Bollywood wave in the UK. Their humour and personas on stage was funny and cheeky. Raj & Pablo just have this unique ability to mingle in with the stars and woo the public. 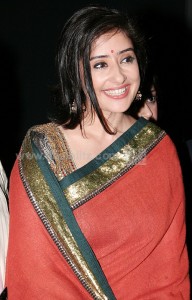 The the 14 finalists began the show with an amazing fashion catwalk, collection designed by the duo  Rohit Verma and Sanjeet Anand; Sarv Atelier. The crowd were dazzled with his exquisite breath taking collections. The collection reflected drama in design, seduction in stitches and passion in prints and is also their signature statement.

During the short interval which had been kept for dress change, the crowd had the opportunity to get up and close with the judging panel. Manisha Koirala was inundated with requests for close up photos and autographs.

The evening proceeded on with the second round of catwalk with an evening wear collection. The girls were all looking stunning and confident. They walked the walk with such poise and passion. Their eyes and smiles spoke a thousand words.

The crowd was surprised with an act that you would not really associate with a beauty pageant – comedy. Mani Liaquat, winner of The Great Indian Laughter Challenge 2008, presented comedy which was hilarious and to the taste of the audience. 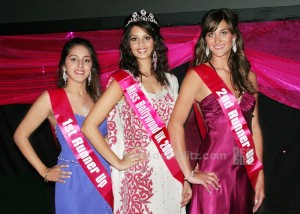 Just before the evening reached the climax, one final act took stage – Hakilee. She had come all the way from France to showcase her dancing talent. Hakilee captured the viewers attention. Having a French background, Hakilee was first discovered by Desitara.  Halkilee states that Bollywood is really picking up in France.

Then the final moment came for the winner to be announced. Reena Patel from London was the winner of the contest and crowned Miss Bollywood UK 2009. The runner up was Simran Chadha from Manchester and third place was taken by Stacey Fox from Essex. 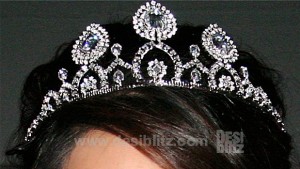 The crown for the Miss Bollywood winner was designed by Birmingham’s fashion designer  Almas Maan and Mumbai’s celebrity fashion jewellery designer, Shaheen Abbas.  Both of them were the sponsors for crown as well as being the designers. Almas Maan briefed Shaheen Abbas to keep in mind beauty, elegance and style for the design. “We did not want the crown to follow the norm shape. The crown should reflect feminity with a touch of panache,” said Almas.

Almas added, “I would like to just say that it has been a huge opportunity and a real humble experience working with two such exceptional professionals, Zia Choudhury and Kully Kaur. This has certainly been a major platform for not only Birmingham but also to the Asian community to get involved and celebrate in something that is close to their roots.”

Almas has created Blush Collection, which aspires to be the next label in designer kurta wear. Almas is working closely with young designers in Mumbai to create some unique designs for her range. At the show, Almas was also given the task to dress the seven hostesses in fucia pink using her creative talents.

Photography for the event was captured by Shaheen, of Shine Photography who is an established name in photography in West Yorkshire. She produced some excellent creative memories from this wonderful show. Photographs from the event are featured here courtesy of Shine photography.

Reena Patel, the winner, now waits to be flown off to India to live the life of a Bollywood celebrity and will be automatically entered into the finals of Miss Universe Great Britain which will give her an opportunity to compete for the title of Miss Universe.

Photos courtesy of Shine Photography (West Yorkshire, UK). Click on the images to get large and moveable views.

Navratri in Birmingham
Paul Chowdhry ~ Stand-Up with a Difference