Navratri is an important date in the Hindu calendar. The festival goes on for nine nights as its name implies and Birmingham in the UK is one home for its celebrations.

Nine forms of Shakti are worshipped during the Navaratris

Navratri is the Hindu festival celebrating triumph of good over evil. The term Navratri or Navaratri means nine nights – Nava meaning Nine and Ratri meaning nights. Also known as Durga Puja, Navratri is a social congregation of the Hindu community, especially those from Gujurat and Bengal, who all get together to celebrate the nine nights and ten days fused with dance and worship.

Nine forms of Shakti are worshipped during the Navaratris. The Devis worshipped depend on the tradition of which region the communties originally come from. Navratri is celebrated by communities getting together for dances and nightly feasts. The most colourful and elaborate celebrations take place in India, in Bengal, where huge idols of the goddess are worshipped. The tenth day of the festival is called Dasera, and signifies the motherhood of God and the win of good over evil.

Two key forms of dance are performed during the Navratri festival – Dandiya and Garba. The Dandiya dance is performed with sticks when the people dance round in circles with their sticks colliding in mid-air. The dance symbolises the warriors in the battle between Lord Ram and the Ravana in the Ramayana. The Garba dance is performed in circles around a lamp (the Garba Deep), or an image of Amba. The dance moves are graceful with sweeping gestures and each movement ends with a clap.

In the UK, Navratri celebrations are held up and down the country, usually represented strongly by the Gujarati community. One such celebration is organised in Birmingham by the Shree Lohana Association Birmingham (UK).

DESIblitz was invited to get an insight into the festival, it’s meaning to people and how the community views the event today. Here are video comments from some the community attending the celebration and their take on what Navratri means to them. 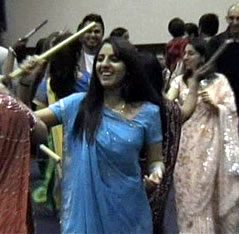 The event is still a time of celebration. The traditional values associated with the festival in which for nine nights people worship, feast and dance, still holds a place of high value for both the older and younger generations.

Navratri is about spending time with  families, connecting with  friends but most of all it is about reconnecting with cultural and spiritual roots. The Dandiya and Garba are the highlights of evening. Even those with little or no experience soon find themselves caught up in the evening of celebration.

Wishing you a joyful Navratri and Dasera from all at DESIBlitz.com.