Paul Chowdhry ~ Stand-Up with a Difference

Starting his journey in 1998, Paul Chowdhry embarked on a career of comedy. From stand-up to film, he has proved himself to be one of the most prolific and top British Asian comedians on the stage of comedy today.

Paul Chowdhry is one British Asian comedian that has proved himself in stand-up with a very successful career in this genre of comedy.

Born as Tajpaul Singh Chowdhry to a Punjabi Sikh family, from Edgware in North London, he is a hugely successful act with shocking wit, diverse jokes about race, and humour based on individuals in the audience of different cultures and sex.

Paul uses the fabric of multicultural Britain as his backdrop and stitches it together in a brutal display of stand-up which makes him an outspoken nemesis and internationally acclaimed Brit-Asian comedian.

He became the first British act to perform at the Caribbean Comedy Festival in Trinidad in 2003, in front of over 30,000 people. He has toured around the world with his show and visited countries such as Hong Kong, the Gulf, Amsterdam, Germany, South and Africa. He headlined the International Indian Kings of Comedy tour.

Paul’s inspirations include comedians such as the late Richard Prior and George Carlin (who is his favourite comedian) and marital arts legend Bruce Lee. 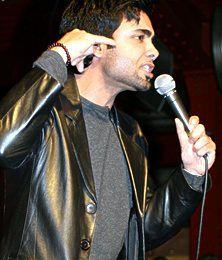 In his early material, Paul used his childhood and memories of his life as a Brit-Asian guy growing up in an Asian household under a strict regime of family and cleverly transformed them into episodes of comedy for his stand-up act.

However, as a British Asian comedian he does not distinguish himself as any different to any other comedian. He says, “When you are funny you are funny to any race.” He doesn’t think people are not going to laugh at his jokes because he is British Asian.  “I can get jokes from there and everywhere and it doesn’t stop me from what I want to do.”

In 2003 Paul won the Critics’ Choice award at the 2003 Smirnoff South African International Comedy Festival.  During 2004, Paul starred in The World Stands Up and The All-New Comedy Store for Five, Paramount Comedy Channel and USA’s Comedy Central.

In 2005, Paul made a definitive mark at the Edinburgh Festival, selling out his debut solo show followed with a further sell out at the prestigious Soho Theatre in the West End of London. He is amongst the few comedians to perform at Wembley Arena and The Grovsenor House before Cherrie Blaire and Richard Attenborough. 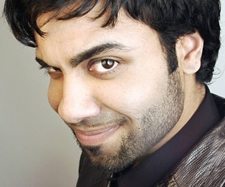 Paul is fully aware of tough audiences but takes them in his stride.  He knows he has had to adapt his material to suit audiences and sometimes it works and sometimes it doesn’t. Its all a learning process and says, “There is no formula to stand up.”

During 2006 he performed nine sell out shows at the NEC Birmingham. In 2007 he debuted his new show ‘Lost in Confusion’ at the Edinburgh Festival, selling out, receiving rave reviews across the board and being chosen by The Telegraph as a ‘must do’ show of the year.

In February 2008 he featured as the headlining act of ‘Comedy Blue’ series for the Paramount Comedy channel. He has also just filmed ‘The Comedy Store TV Special.’

“Brutally honest, internationally acclaimed comedian regarded as the outspoken nemesis of wholesome, traditional Asian comics has a bite every bit as bad as his bark.”

We caught up with Paul Chowdhry before his show at The Drum in Birmingham and got a chance to learn more about this extraordinary comedian who has broken the mould to become a successful stand-up act. Watch what Paul had to say in our exclusive SpotLight video interview below.

Warning – the video contains adult humour and is not suitable for minors.

Paul Chowdhry has also acted in a number of prestigious and high profile films including:

In addition to films, Paul has appeared on television shows such as Holby City, Noels House Party, BBC Network East, Comedy Classics on UK Gold and Tonight with Trevor McDonald.

Paul states that his family are behind him and feels such support is important for whatever you do. He knows fully well to survive in the world of comedy he has to re-invent himself constantly to keep on top of his game. He has achieved this since he started in 1998 and we at DESIblitz.com hope we will see a lot more of Mr Chowdhry on our stages, television screens and film too.

Interview filmed by DESIblitz.com. Performance clips are courtesy of www.paulchowdhry.com.