Kieran Sodhi has been found guilty of trespass with intent to commit a sexual offence against a drunk woman after gaining access to her hotel room.

"I give you absolutely no promises that the final outcome will not be a custodial sentence."

With the intent to commit a sexual offence, Kieran Sodhi, aged 30, from Derby tricked his way into a drunk woman’s hotel room by making the staff believe that he was the victim’s partner.

Despite denying a charge of trespass with intent to commit a sexual offence, a high majority of the jury at Warwick Crown Court found Sodhi guilty after deliberating for more than seven hours.

At the hearing, prosecuting, Alex Warren told the court what took place.

In 2018, both Sodhi and the young woman were staying at a hotel in the West Midlands. He was there for a works event.

The woman had got very inebriated after having too much drink at the party she was attending in the hotel.

Two men from the party had to help her back to her room at about 1.00 am because she was incapable of standing up.

Sodhi had been chatting to the woman during that evening but was staying in a room which was on another floor of the hotel.

The two men that put her to bed fully clothed, witnessed Sodhi outside the woman’s room.

He asked the men if she was okay and told them she needed some water. They agreed to give her some tap water but he insisted that he would get her some from the bar.

The men were concerned about Sodhi’s intentions and waited in her room with her. After waiting 20 minutes, Sodhi did not return, so they left, still with her clothes on.

Mr Warren described to the jury what took place next:

“She has no recollection of being put to bed. The next thing she remembers is waking up the next morning to the sound of a mobile phone alarm.

“She realised it was not her phone and that there was somebody else in her room with her. It was the defendant.

“She was under the covers in bed, undressed and wearing only her knickers, and the defendant was sitting on the other side of the double bed, fully clothed.”

The victim questioned Sodhi and asked him if anything had taken place between them. He replied no, and that he was there just to look after her. She told him to leave her room.

The woman, later on, spoke to her mother about the incident and contacted the police. 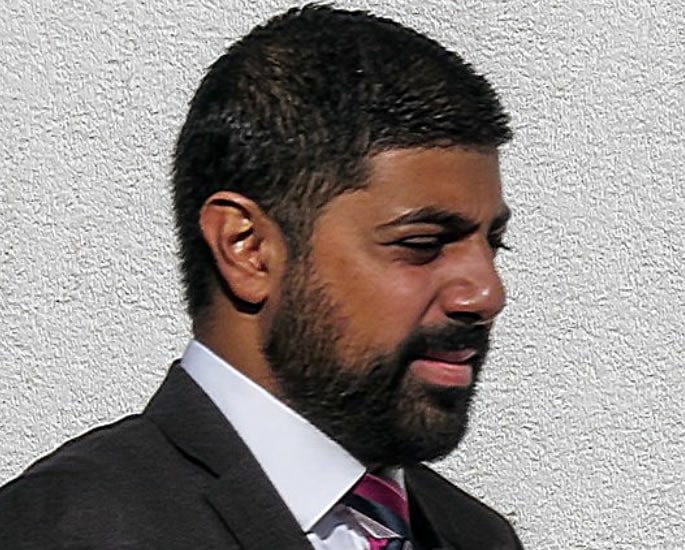 Footage from CCTV in the hotel shows Sodhi entering the woman’s room after going to get a glass of water for her from the bar.

Then the jury was told that he went to the hotel reception desk and convinced the desk staff that he was her partner and requested a duplicate key card for her room.

Sodhi had seen the information which the woman provided to reception when she checked in. So, he was able to answer a security question about her home address.

The staff issued him a key card which he then used to enter the drunk woman’s room by himself.

After some time, Sodhi left the drunk woman and the duplicate key card in her room.

He returned to his room, got changed and then went back to reception.

He once again, after answering a security question, got another duplicate key card from reception after telling a female staff member that his ‘girlfriend’ was sleeping and he did not want to wake her.

Sodhi was seen at 3.09 am letting himself into the woman’s room and was not seen returning back to his room until 7.32 am after she woke and told him to get out.

When Sodhi was giving evidence, he said that he was only acting out of concern for the drunk woman and her wellbeing. Because in the past a drunk cousin of his died after he choked on his own vomit.

He denied that he got the keycard for her room by deceit. He said he honestly told the receptionists why he needed a card and both gave him the card without him answering a security question.

When his lawyer, Nick Devine asked him if he had “any sexual designs on her”, Sodhi replied “No”.

Sodhi said, after he checked on her initially, he went back to his room. But because of the noise from another room, he could not sleep. So, he got dressed and was going to go home but decided to check on the woman before he left, as he had told her he would.

“When you went in on the subsequent occasion was it your intention to commit a sexual act?”

However, Mr Warren argued that “the only reasonable inference” was that Sodhi had removed her clothing and that he had

The jury failed to reach a verdict on a further charge of sexual assault on the same drunk woman.

After being found guilty by the jury on the initial charge of trespass with intent to commit a sexual offence, the judge told Sohdi he might go to prison for his offence.

“In granting you bail, I give you absolutely no promises that the final outcome will not be a custodial sentence.”

Sodhi was granted bail and will be sentenced at a later date.