A woman from Punjab in Mukstar was severely beaten by a group of men with belts and a violent attack over a money lending issue.

"This is an extremely unfortunate incident"

An incident which has attracted headlines from Punjab is that of a woman, named Mahila, who was brutally beaten by a man and his aides for at least half an hour on a public road in the city of Muktsar.

The inhumane act was carried out by a man named Sunny Chaudhary, who is the brother of Punjab Congress MC Rakesh Chaudhary. He was accompanied by four other men who joined in the beating of the woman over a money lending issue.

They gatecrashed and forced their way into Mahila’s home.

Then they grabbed her from the hair and dragged her horrifically out of her house. Then in full public view, the men mercilessly started to beat her.

Chaudhary and his men used belts and sticks during the vicious assault. They slapped and kicked her in the stomach repeatedly.

The vile attack continued until Meena feel completely unconscious. No one from the onlookers helped the woman in a beaten state.

Mamta the mother of Mahila, who tried to come to the rescue of her daughter being beaten was also physically attacked by the men and dragged onto the road.

Another woman tried to stop them and she was shoved away aggressively as well.

Mahila’s son saw what was happening to his mother and screamed and cried for help. He began to shoot a video of the attack which was uploaded to social media. 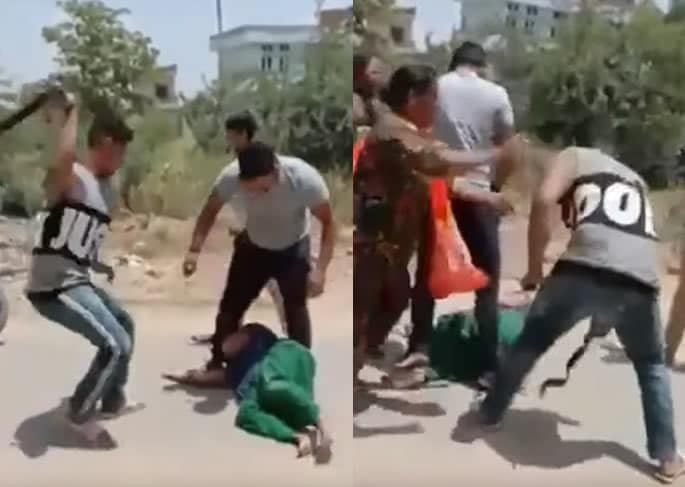 Immediately, the video of the incident went viral and was reported to the police.

However, before police could act in aid of the woman, Congress MLA Sukhdarshan Singh Mrar, Ranjit Dhaliwal an aide of Congress leader and former MP Sher Singh Ghubaya all turned up at the police station in support of the accused.

Police still investigated the matter due to pressure mounting up against them for no action from the Punjab women commission.

Senior Superintendent of Police (SSP) Manjeet Dhesi arrived at the scene and said:

“This is an extremely unfortunate incident, we have arrested six people and will push for severe punishment. The victim has been admitted to a hospital.”

Mahila was is admitted to the civil hospital in Muktsar with major injuries from the attack.

Watch a video of the horrific attack on Mahila (warning the video contains graphic violence):

The attacked woman told the media:

“The matter is all to do with money. Sunny Chaudhary’s wife came to my house a day earlier to get the money from me.

“We told them that we will give it to them in a day or two.

“She then said you should give your daughter to me until you can pay.

“No one can bear to give their child to someone in this way. I said everyone has daughter’s please do not say this to me.

“She started swearing at me and left.

“They all horrifically beat me. I can’t tell you how much distress I am in. I just want justice.”

She added that she pleaded with them to talk to her but they just started to attack and hit her. She said she was threatened by them not to tell anyone about what took place.

But it was her 12-year-old boy who managed to help his mother by shooting the video of the attack.

It’s believed that the attacker Sunny Chaudhary is said to have been involved in many cases similar to these in the past and no action was taken against him to political protection.

In this instance, police say they have registered a case against 10 people including MC Rakesh Chaudhary and his brother Sunny Chaudhary.

Police say they will conduct a full and proper investigation into the case of the attack.

Amit enjoys creative challenges and uses writing as a tool for revelation. He has major interest in news, current affairs, trends and cinema. He likes the quote: "Nothing in fine print is ever good news."
Gang jailed for £4m “ring and bring” Drugs Operation
Man posed as ‘Partner’ to get into Drunk Woman’s Hotel Room