Bollywood bombshell Mallika Sherawat appears in a music video of the song ‘Whatta Man’ performed US pop star Bruno Mars. Giving her, even more, status in the West as a versatile actress not scared to venture out of her comfort zone of Bollywood.

"Bruno is a great guy and it was a wonderful experience"

Mallika Sherawat has yet again got a part in a unique and mainstream music project! This time the hot Bollywood actress makes a key appearance in a Bruno Mars pop video.

Her Hollywood presence is growing no doubt, as she makes more and more cameos and stars in films, videos and other media projects in the West. Her appearance is for the Bruno Mars parody video of Salt ‘N’ Pepa’s ‘Whatta Man’ (featuring En Vogue) for a comedy website called Funny or Die.

Mallika is a great fan of the Grammy Award winner Bruno. His hit single ‘Just The Way You Are’ is an all time favourite of Mallika’s. Therefore, it did not take long for Mallika to agree to do the video. It was literally an instantaneous yes! 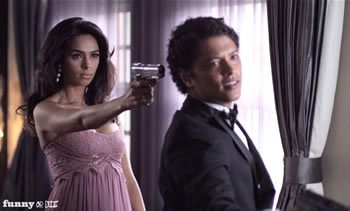 Talking about her experience Mallika said: “Just The Way You Are is one of my all-time-favourites. So when my manager called to ask if I’d do a video with Bruno, it took me barely a second to say yes. Shooting the video was so much fun, because Bruno is a great guy and it was a wonderful experience working with him,” she stated.

Her scenes are in a 007 Bond like set-up within the song, for the website, where she plays a deceiving woman with a gun with Bruno as an ‘agent’ like character.

Also it’s been revealed that Mallika has been a fan of the Funny or Die website even before she found out that the American film producer Judd Apatow, comedian actor Will Ferrell and Adam McKay founded the site in 2007.

She tweeted about doing the video saying: “Thx:) @Marsanian: @BrunoMars tht video just made my day..shoutout to @mallikala..nice to an Indian making it big with whatta man Bruno mars.”

Bruno Mars has had three number one smash hit singles – ‘Just The Way You Are’, ‘Grenade’ and The Lazy Song.’ Of these, ‘Just The Way You Are’ has earned many nominations as well as it receiving seven Grammy Awards. Hewon a number of awards including the Grammy for Best Male Pop Vocal Performance in 2011.

“Shout out to Funny or Die for makin this happen http://FunnyOrDie.com/m/771m This was so much fun..”

For a Bollywood actress to make a move of this nature is a great look for Mallika. The actress has recently attempted to make the transition from Indian cinema to Hollywood, starring in the US projects Hisss and Politics of Love. 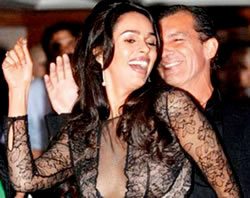 Mallika has also been bust promoting her Bollywood film Kismet Love Paisa Dilli (KLPD) with her co-star Vivek Oberoi. “KLPD is a film about the lafangas of the capital city. It is the story of Lukesh Duggal, a tapori from Delhi, who falls in love with Lovina, a headstrong girl,” said Mallika.

On a more personal note, whilst on the sets of KLPD, Mallika was seen to be exercising her command of the Spanish language. A source said: “Mallika has been going around speaking in Spanish while shooting for KLPD. Nobody was aware that Mallika can speak proper Spanish. Everyone was left wondering how she suddenly managed to pick up the nuances of a completely foreign language.” It was subsequently revealed by Mallika on a radio interview that it was in fact, Hollywood actor, Antonio Banderas who taught her Spanish, which is his native tongue.

A lot of gossip is also flying around of an affair between Mallika and Antonio, who is still married to Hollywood actress Melanie Griffith. The stories started when Mallika was photographed dancing with Antonio earlier this year at Cannes. Several tabloids are also reporting an impending divorce between Antonio and Melanie. Antonio’s publicist in Los Angeles, has responded to the rumours in a denying way saying: ‘Mallika Sherawat, who?’

Nazhat is an ambitious 'Desi' woman with interests in news and lifestyle. As a writer with a determined journalistic flair, she firmly believes in the motto "an investment in knowledge pays the best interest," by Benjamin Franklin.
Jaz Dhami and BritAsia TV reconcile
Special Tribute to Jagjit Singh