The Loss of a True Leader Nelson Mandela

The tragic news of Nelson Mandela’s death on December 5, 2013 has left a world in mourning. The former South African President and anti-apartheid hero died at the age of 95.

"No words can adequately describe this enormous loss to our nation and to the world."

The passing of a great man is always a keen loss, especially when there are so few good men living. Nelson Mandela is one such leader who will be mourned by millions for many years to come.

The former President of South Africa passed away at his home in Houghton, Johannesburg after months of suffering from a lung illness. He died at the age of 95, just before 9pm local time (7pm GMT) on December 5, 2013.

The current South African President, Jacob Zuma announced the tragic news in a TV address: “He is now resting. He is now at peace. Our nation has lost its greatest son. Our people have lost a father. Although we knew that this day would come, nothing can diminish our sense of a profound and enduring loss.” 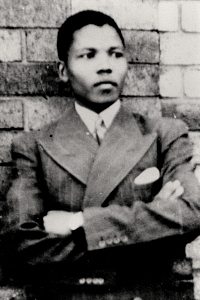 Lovingly called ‘Madiba’ (from his Xhosa tribe) or ‘Tata’ (father), Mandela was a strong man who fought against the unjust tyrannies of his people. Many see him as one of the last inspirational leaders of our generation.

Mandela was born in 1918 as Rolihlahla Dalibhunga Mandela in rural Transkei, Eastern Cape. One of 13 children in an African royal family, his father died of tuberculosis when he was only nine years old. Despite the royal lineage, Mandela had a very basic childhood:

“We slept on mats, without pillows, resting our heads on our elbows. Our mother’s stove was a hole in the ground over which she put a grate,” he recalls.

The time of Mandela’s birth saw the height of colonisation of Africa that had destroyed the indigenous communities. Apartheid (or apartness) in South Africa meant that racial discrimination and segregation was widespread.

Every non-European citizen was classified according to his or her race. Marriage was prohibited between races and certain races were forced to live in pre-designated areas of the country.

Racial segregation was not only limited to the African indigenous communities; Indian South African’s who had migrated from colonial India were also victims. Most lived in the city of Durban, now making up a population of 1,300,000. Durban is regularly considered as the ‘largest Indian city’ outside of India.

Following his father’s death, Mandela was sent to live at the Thembu royal house in order to be educated and groomed in the skills of leadership. Attending the only black university in South Africa, Fort Hare, Mandela was soon expelled for rebelling against the authorities. 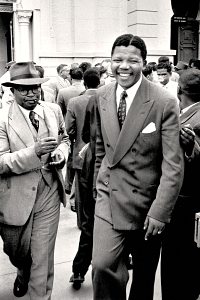 He later joined the communist African National Congress (ANC) in 1944, and went about transforming it into a revolutionary political party.

Madiba travelled across South Africa to spread his anti-apartheid sentiments. Following several brushes with the law and a ban from public meetings, in 1955, Mandela helped draw up the ANC’s Freedom Charter.

The Charter itself sought to reinstate South Africa to those in the majority rather than the privileged minority.

South Africa, Mandela believed, belonged ‘to all who live in it, black and white, and that no government can justly claim authority unless it is based on the will of all the people.’

In 1961, Mandela co-founded a military led wing of ANC, ‘Umkhonto we Sizwe’ (Spear of the Nation, MK). Mandela had by this time resolved that peaceful protest was no longer an option, and they would have to fight for their freedom. MK began to physically sabotage government spaces and engage in guerrilla warfare:

“Without violence there would be no way open to the African people to succeed in their struggle against the principle of white supremacy. We were placed in a position in which we had either to accept a permanent state of inferiority, or take over the Government. We chose to defy the law,” Mandela admitted.

Madiba was finally captured and arrested in 1962 where he was accused of conspiring to overthrow the government. He was given life imprisonment in the Rivonia Trial. He then served the next 27 years in prison at Robben Island, Pollsmoor Prison and Victor Verster Prison.

It was in 1990 that he was released by new South African President, F. W. de Klerk. In the following years, Mandela alongside Klerk negotiated the end of apartheid in South Africa. They were both awarded the Nobel Peace Prize in 1993. 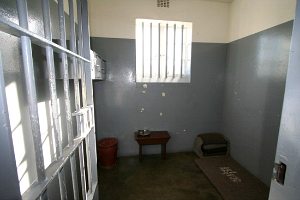 One of the notable qualities of Madiba, which has continually astonished the world was his sincere and genuine forgiveness towards his ‘White’ oppressors, bearing no malice or vengeance against them. Following his release he commanded the nation to put down their arms and instead work together.

Interestingly Mandela was not alone in fighting apartheid. Mahatma Gandhi was a notable opposition to the inequality of ‘White’ supremacy during 1893 and 1914.

After Gandhi, parties of the Indian Congress allied themselves with African revolutionists in the fight against apartheid. Mandela notably made his first visit abroad after he was freed to India. He has been described by Prime Minister Manmohan Singh as a ‘true Gandhian’.

Indian South Africans had also joined the ranks of the ANC, with the likes of Ahmed Kathrada, a vocal political activist who was imprisoned for 18 years alongside Mandela and Walter Sisulu.

In 1994, Mandela became the first Black President of South Africa which he held until 1999. His retirement saw him re-engage with activism and philanthropy across the world, before his health began failing him in 2004.

“I have no political inclinations, am an ordinary Indian citizen but can’t stop shedding tears at the passing a man who stood head and shoulders among many in similar positions of authority.” 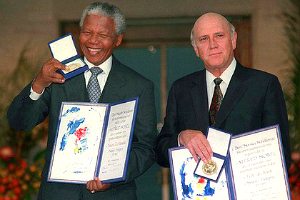 Barrister, Ashwin Trikamjee of the South African ‘Hindu Maha Saba’ in Durban had the privelege of meeting Mandela numerous times.

Speaking to the BBC Asian Network, Ashwin said: “He had this amazing ability to just bring everybody down to simple grassroot level.

“I shook his hand and there is a kind of warm energy that would flow from his hand through your whole body, almost making you feel like you had been blessed. He had a calming smile that would make everyone feel like he was their own.”

Nations across the world are in mourning for Madiba. Government buildings across South Africa and in Washington DC are flying their flags at half-mast as a sign of respect. The European Union and Fifa have also joined suit.

“Mandela was the tallest leader of not only his generation but possibly this entire paradigm. The role that he personally played in dismantling the apartheid is something exemplary.

“The entire nation is one with the South African people in condoling his sad demise. The Cabinet met today and it has been decided that there would be five days’ state mourning.”

US President Barack Obama paid tribute to Madiba, who he considers one of his biggest inspirations, saying: “He no longer belongs to us – he belongs to the ages. We’ve lost one of the most influential, courageous and profoundly good human beings that any of us will share time with on this Earth.”

Pakistani political leader, Imran Khan also tweeted: “Mandela opposd violence & use of force. I had the privilege to meet him and he named Jinnah & Gandhi amongst his inspirations.”

A fitting tribute left on Madiba’s website on behalf of The Nelson Mandela Foundation, The Nelson Mandela Children’s Fund and The Mandela Rhodes Foundation read: “We want to express our sadness at this time. No words can adequately describe this enormous loss to our nation and to the world.”

“We give thanks for his life, his leadership, his devotion to humanity and humanitarian causes. We salute our friend, colleague and comrade and thank him for his sacrifices for our freedom.”

President Zuma is adamant that Mandela’s legacy will continue to live and breathe through the nation’s citizens: “Wherever we are in the country, wherever we are in the world, let us reaffirm his vision of a society in which none is exploited, oppressed or dispossessed by another.”

Nelson Mandela was indeed a man who was a living example of conquering in the face of adversity and injustice. For the most part, he will be remembered for his kindness, humility and his selfless ability to forgive his oppressors.

Aisha is an editor and a creative writer. Her passions include music, theatre, art and reading. Her motto is “Life is too short, so eat dessert first!”
Changes in Education affecting British Asians
The Real Threats of Online Stalking