Newlyweds Katrina Kaif and Vicky Kaushal have shared pictures from their Haldi ceremony following their lavish wedding in Rajasthan.

"My cheeks still hurt from smiling so much.”

Katrina Kaif and Vicky Kaushal are beginning to share glimpses of their wedding festivities on social media.

The couple took to Instagram on December 11, 2021, to share pictures of their haldi ceremony which took place ahead of their wedding on December 9, 2021.

In the pictures, Katrina and Vicky can be seen applying turmeric to one another and rejoicing as their family members also apply turmeric to them.

Vicky Kaushal shared pictures from the haldi ceremony and captioned them with:

Katrina Kaif also shared pictures from the ceremony on her Instagram page with the same caption. 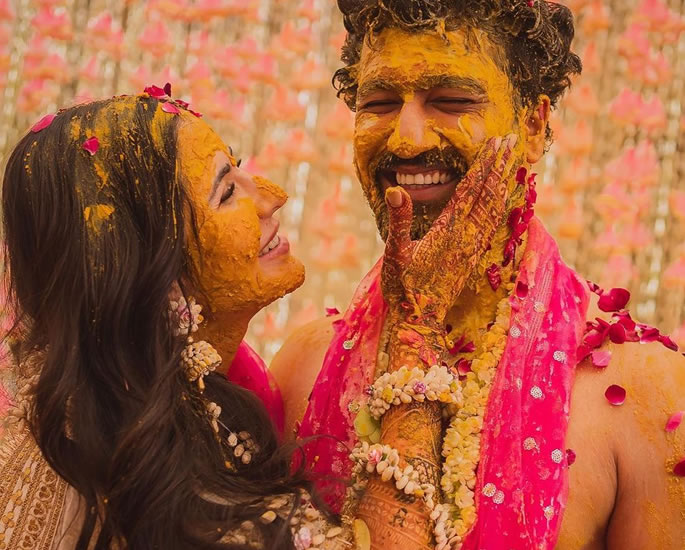 Katrina Kaif was pictured in a white Sabyasachi lehenga with a white floral necklace and statement earrings.

Vicky Kaushal wore a white kurta-pyjama but removed the kurta and wore a pink dupatta around his neck.

In a picture shared by Vicky, his father Sham Kaushal can be seen applying turmeric on the groom’s arms.

Vicky is also seen striking a pose while his friends pour a bucket of water over him.

Rather than being showered with water like her husband, Katrina showed off her henna design as rose petals cascaded around her.

Katrina’s sister Isabelle Kaif shared a picture of herself as she applied turmeric on Vicky’s face. 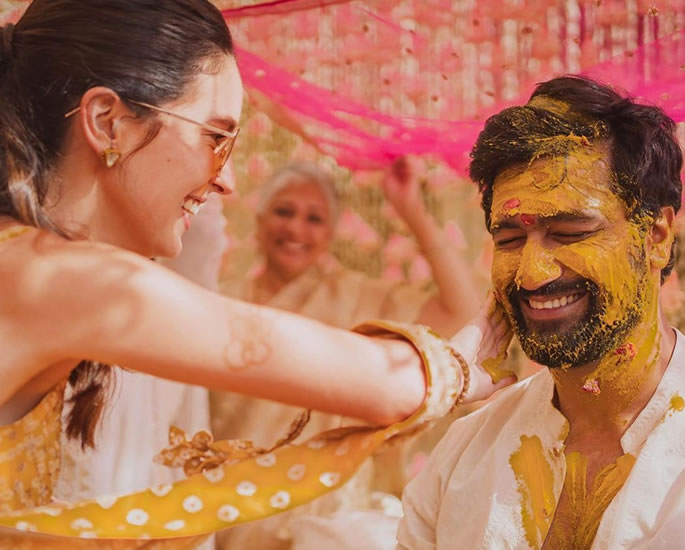 She captioned the picture:

“Full fun and joy, my cheeks still hurt from smiling so much.”

Vicky Kaushal’s brother Sunny also shared a picture in which he cheered on Katrina and her mother Suzanne Turquotte. 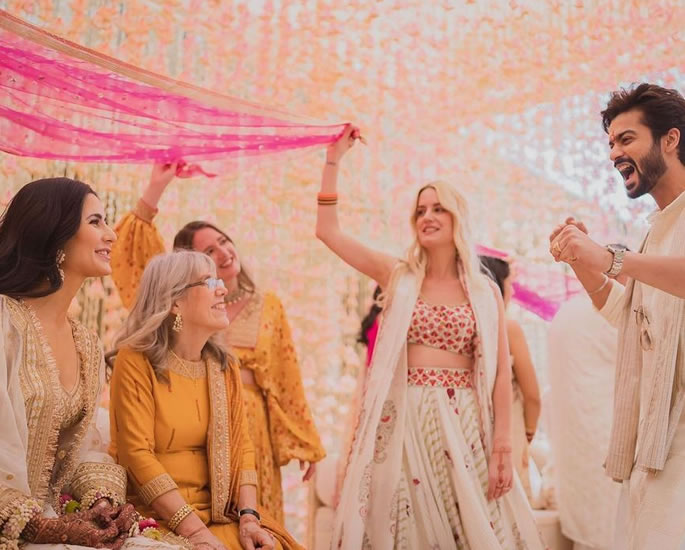 In the caption, he wrote:

In the caption, Anaita wrote:

“Pure love and joy! These are the moments that fill our hearts. Haldi ceremony with my darlings.”

After the wedding, the couple sent gift hampers to their friends in the industry.

Actor Ronit Roy shared a picture of a hamper with the caption:

“Dear Katrina and Vicky, thank you so much for this lovely hamper.

“Neelam and me are so touched by your gesture. Lots of love and once again wish you both a blissful life together.”

Katrina Kaif and Vicky Kaushal were rumoured to be flying to the Maldives for their honeymoon.

However, a source close to the couple revealed that they will celebrate their honeymoon at the Six Senses Fort Barwara itself.

The source further revealed that the couple will stay at the resort until December 12, 2021.

Following their honeymoon, Katrina Kaif and Vicky Kaushal are expected to fly back to Mumbai to resume their respective film shoots.

Ravinder is a Journalism BA graduate. She has a strong passion for all things fashion, beauty, and lifestyle. She also likes to watch films, read books and travel.
Nia Sharma reveals Friends Slut-Shamed Her
Bharti Singh and Haarsh Limbachiyaa announce Pregnancy