We caught up with queer artist Jason Patel to talk about his musical influences, his track ‘One Last Dance’ and the landscape of music.

"South Asian culture is so queer."

The colourful and innovative musician, Jason Patel, has graced the music scene once again with his track ‘One Last Dance’.

The RnB and pop-infused song was released in January 2022.

Influenced by 90s and early 00s pop, as well as the romanticism of Bollywood, Jason’s musicality oozes with culture and vibrancy.

However, the songwriter’s inspiration is much more deep-rooted than that.

He openly admits that his grandmother was one of the defining idols in pursuing a career as an artist.

Having migrated from India, unable to speak English and with no education, Jason’s grandmother was able to build a solid foundation for her family to thrive.

This is why the musician’s catalogue is so emotional. She taught him the art of risk-taking and embracing all of life’s opportunities.

Not only that, but she exposed Jason to the fierceness, strength and resilience of the South Asian culture.

This is one of the fundamentals within Jason Patel’s music. He aims to impact the world in the same divine way that his grandmother affected him.

Having studied at Rose Bruford College drama school, Jason’s tracks are a beautiful mix of theatre, art and celebration.

Drawing upon personal experiences, his queer identity and Indian heritage, Jason Patel wants his music to be a space of representation.

This is exactly what ‘One Last Dance’ achieves.

DESIblitz caught up with Jason Patel to talk about his creative process, ‘One Last Dance’ and embracing his individuality.

Can you tell us a bit about your background? 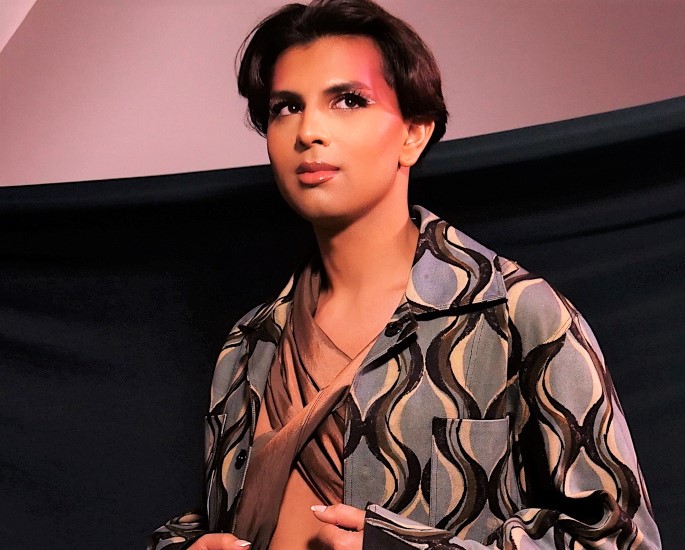 My name is Jason Patel and I come from a Gujarati-Hindu household.

I was a 2nd generation immigrant in the northwest of England and ever since I can remember, I was queer.

I wear all of these elements so proudly every day.

Music was always around me and it had a sacred meaning.

We sang religious songs to Bhagavan (God) and with the contrast of watching pop stars on television, it just clicked for me.

It was like God sent me a spark, a sign that this is what I needed to do, what I was destined to do.

I was so enthralled with music, it just moved me and made me explode in every way and I just never stopped from them on.

Honestly ask my parents, the only things I wanted was a keyboard, microphone and musical items. I never wanted anything else.

Music has always been a part of me and it always will be.

Which artists have inspired your sound and how?

There are so many artists!

So I would say recently in this new era of my evolving sound, I would say Priya Ragu, SZA, & Doja Cat.

“They’re all just owning their truth and really making something honest, fun and spicy.”

They all have that tie to the eastern world which really inspires me as they are all bringing in that flavour and spice in their music.

They really allow me to think about how I can own all the elements of who I am and represent who I am, where I come from and share that greatness.

What inspired you to create ‘One Last Dance’? 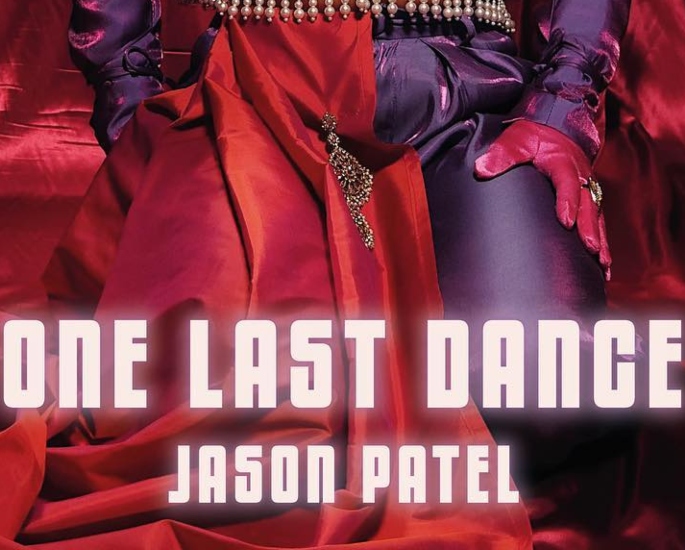 ‘One Last Dance’ really was a late winter lockdown song that I wrote in a box bedroom in London in the dark.

It was just me delving deep to really just process and break out of a time where I was overthinking everything and getting indecisive.

It really empowered and brought life back into me and pushed me through 2021.

It’s a die-hard love song that is relatable to any situation.

It’s all about the end of days ’cause at the time it really felt like we were not going to see a light out of Covid-19.

I felt pulled to create a visual for this song as it was the first time I added in those raga classical elements to take my music to that next level.

The raga elements tie everything together.

It’s this motif that is captivating and tingling that really just hooks you in. Raga adds this subtle layer but really takes the song to a new dimension.

It goes 3D for me and lifts everything. It was a light bulb moment for me and something I have continued to really explore in upcoming works.

I know it isn’t new to be experimenting with eastern sounds in pop music but I was reclaiming that whole piece as a British Asian artist.

This is how it is done.

That was crucial for me subconsciously as well as consciously considering the political climate we live in.

What was the creative process behind the music video?

There was an Instagram reel created by my dear friend Zain.

He made a mockery of the cultural appropriation that the western world has done, customising our history, fashion and art.

It inspired this whole creative direction.

“It brought together everything I was bullied for and ashamed of growing up and celebrating it.”

The music video spreads a message of love and hope at its core. It showcases this rich history we shouldn’t ignore.

The video shows that our fashion is not a costume, it is high calibre, fashion magazine-worthy and has worldwide appeal.

I built a team of incredible people who put this together who are all POC, queer, or women.

I felt it was really important to create an iconic visual.

So, I created this unapologetic story that everyone can relate to and be inspired by, especially some South Asian queer children who can see themselves in me.

It sounds cliche but I didn’t have that role model and so I find it so important as an artist to represent!

What themes do you try to convey the most in your music? 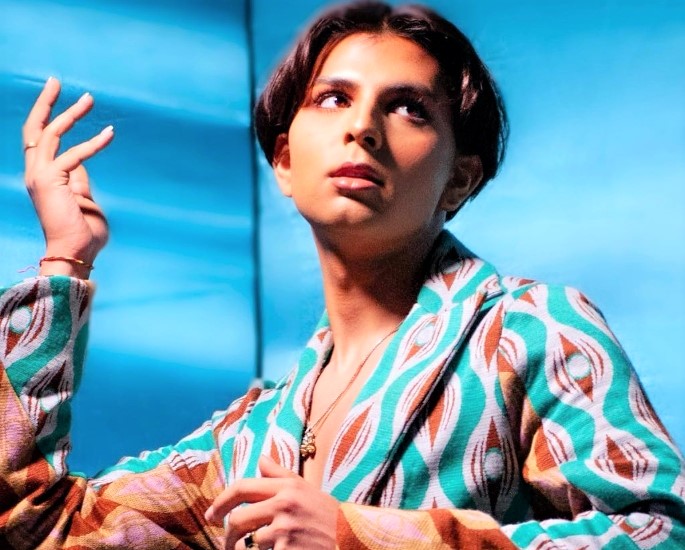 It is this diary of discovery and answering all these questions in my head and figuring things out.

You know growing up in an Asian household and in the UK we are taught to not show emotions, show a brave face and brush things under the carpet.

My release was very much music and I channelled all of that through writing and singing when I was alone.

It was my time to be free.

It’s a deep-lying emotional expression because I was giving these experiences the moment they deserved so I could grow and learn.

Which artists would you love to collaborate with and why?

I would love to collaborate with Lady Gaga! I mean come on!

She has proudly allowed me to be myself and collaborating with her would be a milestone.

“I see her humble heart of gold and I really think we would get on like a house on fire.”

I see myself in her and I genuinely relate to her and feel that she is authentic and owning who she is and empowers others.

It transfers into her music and I hope I do the same with mine.

How do you think the music landscape has changed since the 90s? 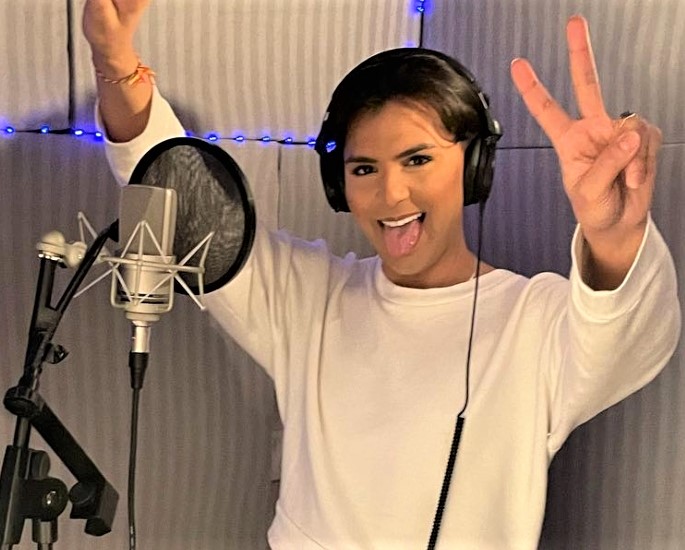 Wow! I think it is ever-evolving because we go from such extremes.

I think it has just changed by learning from each other and really finding something that makes you go wow.

Your thinking about music in such new ways which brings new perspectives.

Especially in this era of technologically exploding, it has really got people taking inspiration in new ways and elevating music.

I love how in the past few years, music really has circled back to those 90s/00s sounds.

But they’re remixed and reinvented to bring them to a contemporary young audience such as TikTok and the fast pace world of viral music trends.

Why is it important to fuse your queer identity and South Asian heritage within music?

South Asian culture is so queer.

Look at how so colourful it is (a full-on rainbow), so they naturally belong together!

“It is so important to show that these worlds belong together and create such special experiences!”

It’s about representing, inspiring and transforming our world and bringing everyone together!

You can be all these things you want to be when you’re in the world of my music and artistry.

What has your musical journey been like as a queer British Asian? 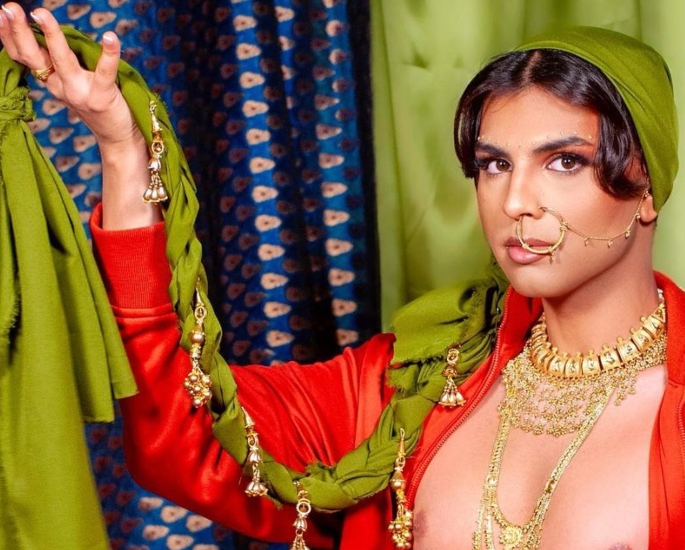 I come from a working-class family. My family migrated from India, worked hard and sacrificed so much to survive and grow.

They gave me and my siblings the opportunity to do what we wanted to do because none of them had the chance. It wasn’t an option.

I hold that pressure and weight with me every day!

Furthermore, I find it difficult as I don’t have a family who knows anything about this industry or any way to get inside.

I worked twice as hard to be able to get here!

Learning from mistakes, searching and being my own motivator and pushing my own family to support me and help me, I had to take control of my destiny!

I want other artists to be in charge of their own fortunes as well.

It translates into your music, the meaning is there and you learn and grow through everything you create and it’s the coolest!

I tried to appropriate so much when I was younger, I lost that identity of who I was cause I was pretending to be something I wasn’t, so the authentic sound wasn’t there.

Then as soon as I stopped caring about what anyone thought of me, I owned my skin, queerness, heritage and they became my strengths.

It’s a journey but I wouldn’t change it because it’s giving life to the incredible career I am forging and envisioning.

Which other artistic industries do you want to have an impact on?

I trained as a musician, actor and performer.

I went to theatre workshops and summer schools and did everything to get out there!

So, I ended up studying theatre at Rose Bruford Drama School and graduated.

I entered the fabulous acting industry which is hardcore but it works hand in hand.

An artist is creative in multiple ways and dimensions. I want to impact every industry I’m involved in.

Jason Patel is undoubtedly a skilful, passionate and diverse artist.

The creative musician has already teased his musical potential with tracks like ‘In My Heart’ (2021) and ‘Good To You’ (2021).

The sultry singer has already received incredible recognition from the likes of Kiss FM and BBC Asian Network.

With his splendid pride in his South Asian heritage and modern creative processes, Jason’s catalogue is a breath of fresh air.

Also, the self-confidence he has in expressing his queer identity will surely allow similar artists to flourish.

Check out ‘One Last Dance’ and more of Jason Patel here.

What does Guru Randhawa Look for in a Date?
Why was Bappi Lahiri the ‘Disco King’ of Bollywood?