Mahesh Sharma’s comment on the ‘No Skirt Ban’ recently evoked outrage in India as he was ridiculed on Social Media. However, are his comments debatable?

"For their own safety, women foreign tourists should not wear short dresses and skirts"

In a statement to the media, he also proposed that foreign women should also avoid going out at night.

“For their own safety, women foreign tourists should not wear short dresses and skirts… Indian culture is different from the western (culture).”

The 55-year-old further added that there will be an advisory leaflet that will be handed out to foreigners when they arrive in India:

“When tourists arrive at the airport, they will be given a welcome kit which has a card with dos and don’ts… it has instructions like if they are in small areas, they should not roam around alone at night or wear skirts… They should take a picture of the car they are travelling in and send it to a friend as a precaution.”

As expected, Mr Sharma’s remarks sparked an uproar in the nation, and he was ridiculed on social media.

Arvind Kejriwal, a Government critic and Chief Minister of Delhi expressed on twitter: 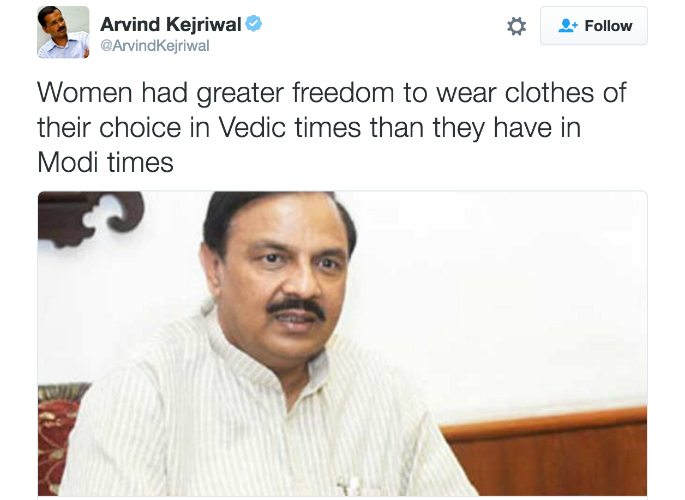 Furthermore, both tourism industry leaders and women activists of Agra protested. They insisted that such statements convey a wrong image about India as a country.

Swati Maliwal, the Delhi Commission for Women (DCW) Chief  stated that the comments portrayed a “horrible and pathetic mindset”.

Although Mr Sharma’s comments evoked outrage in India and on social media, his remarks are debatable.

BBC Asian Network radio presenter, Secunder Kermani questioned whether the Indian minister’s comments were outrageous or his comments made sense due to the high level of sexual harassment cases in India.

Trey, a father to a young daughter said to Kermani he agreed with the minister:

“I think at the end of the day he’s thinking about protecting life and protecting women. If he feels, and he knows his country and culture, if he thinks it can help avoid a certain situation then I think his advice is very much sound,

“Obviously, men are to blame but the bottom line is if you know there’s a problem, then do what you can to prevent it.”

However, a British Asian girl Fatima, argued against the minister’s advice claiming:

“It’s quite ridiculous I think. This entire debate is really minimising the impact of the male predator in the situation. I mean it’s very easy to advise men to lower their gaze and allow women to dress as they wish. I mean this is an ongoing problem,

“I think it’s very dangerous that the male participation in sexual harassment is completely minimised and almost justified by blaming it on the choice of the dress of a woman.”

After passing these comments, the politician was forced to clarify his remarks;

“It is country with different cultures, different eating habits and different dressing senses which change on every 100km. We have a tradition (of saying) Atithi Devobhava (the guest is almost like God). Such a ban is unimaginable. I said this as an advisory when going to religious places. Like when we go to Gurudwara, we cover our heads, when we go to temple, we remove our shoes.”

“I am a father of (two) daughters. I have not said what one person should wear or not wear, neither it is desired nor I am authorised to say so. I have only said this as an advice when they visit a religious place,”

Mahesh Sharma has previously been criticised for controversial comments.

A provocative statement was made last year, where the father of two blamed “westernisation” for India’s corruption. He also said that girls wanting a night out was “not acceptable in India”.

Are British Asians Becoming more Materialistic?
US Indian stabs Wife for Being too Fat but escapes Jail