Can Desi Men wear Skirts too?

Fashion is expression and personality. So, if a Desi man wants to wear a skirt, will he be ridiculed or praised? DESIblitz investigates.

“I have finally found a place where I belong.”

Fashion is more than just clothes. It is expression, personality and emotion. So why are men, specifically Desi men, ridiculed for wearing skirts?

There are a few taboos left in fashion, and these undoubtedly come down to gender and stereotypes.

Many argue western fashion is a lot more progressive and accepting of all styles.

However, history and culture suggest Desi men have been wearing skirts for a long time.

Perhaps this stylish trend is making a bold comeback.

The History of Desi Men Fashion 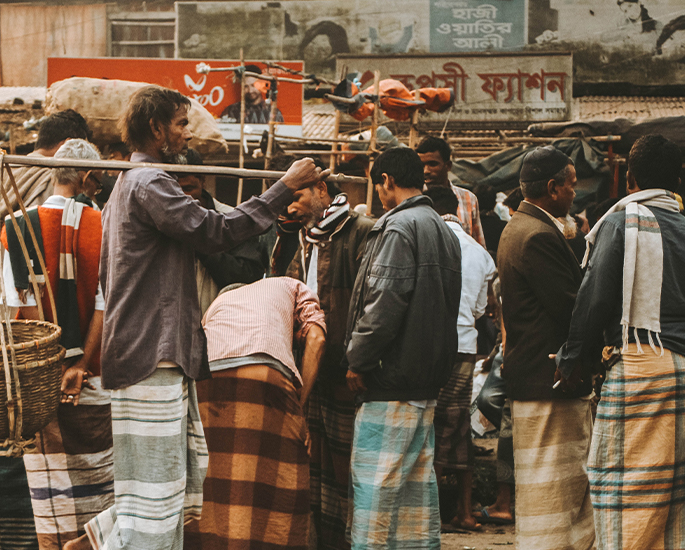 Historically, many assumed garments were designed for practical reasons rather than for their aesthetics.

However, research has shown clothes were designed to exude the individual’s status, power and wealth.

Evidence of clothes was found in the excavation of the Indus Valley Civilisation.

World-famous sculptures like the statue of ‘Priest King’ wearing a printed robe is from the Indus Valley Civilisation.

Centuries back in India, locally grown cotton would be used to create these garments.

Research has shown lightweight robes were worn due to the hot climate.

Moreover, the cotton robe would involve a single piece of cloth wrapped around the whole body and draped over the shoulder.

If these robes were worn in western cities, they would be mocked for being too feminine.

Yet, these garments were worn out of practicality. There was no womanly typecast attached to this clothing.

The British Empire and its Influence

Moreover, the British Empire had a drastic impact on how Indian men dressed.

There was a European influence on India’s fashion sense.

During the colonial period, Indian clothing had many changes.

Indian men from upper-class families would be encouraged to wear formal shirts and trousers. 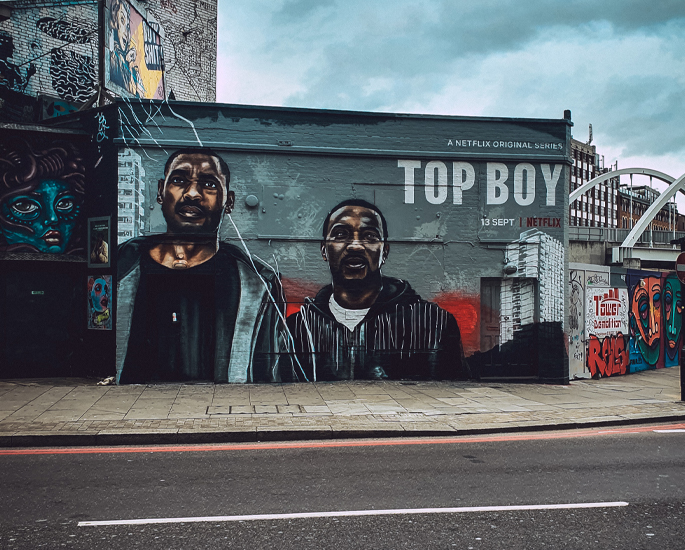 The fashion of Desi men has most definitely changed.

Music, sport and TV has had an extreme influence on how people dress now.

For example, popular TV shows like Top Boy give an insight into the London estate lifestyle and the style of those colloquially called “roadmen”.

Alongside this, sportswear is widely available in most shops and is durable for the harsh winter.

Designer tracksuits are very popular too. They combine high-end fashion with its humble origins.

There is a masculine appeal to this aesthetic.

A sense of security and confidence emulates from this style.

What is in Trend for Desi Men?

In the fashion industry, trends are constantly evolving and developing.

Skirts have been included in autumn/winter collections of famous western designers like Stefan Cooke, Ludovic de Saint Sernin and Burberry.

Skirts are portrayed as bold, a sophisticated garment for the modern man.

There is arguably a similarity between the popular garment of basketball shorts and the freeing swish of a skirt. 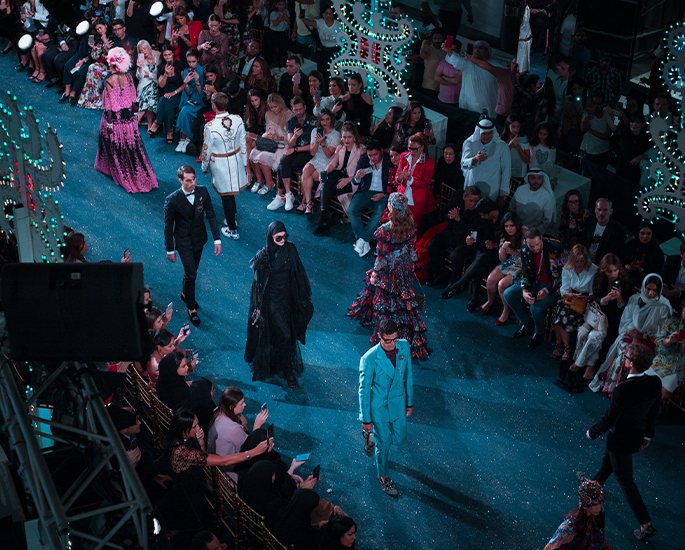 However, when singer and actor Harry Styles posed for Vogue wearing a Bonner knitted skirt and a Comme des Garçons kilt, there were mixed responses by social media users.

Many applauded Harry styles for going against clothing norms and embracing his true style.

Whereas others ridiculed him, calling him homosexual, a woman or transgender.

Therefore, it is understandable why some men would rather wear tracksuits than bolder clothing like skirts, to avoid brutal ignorance. 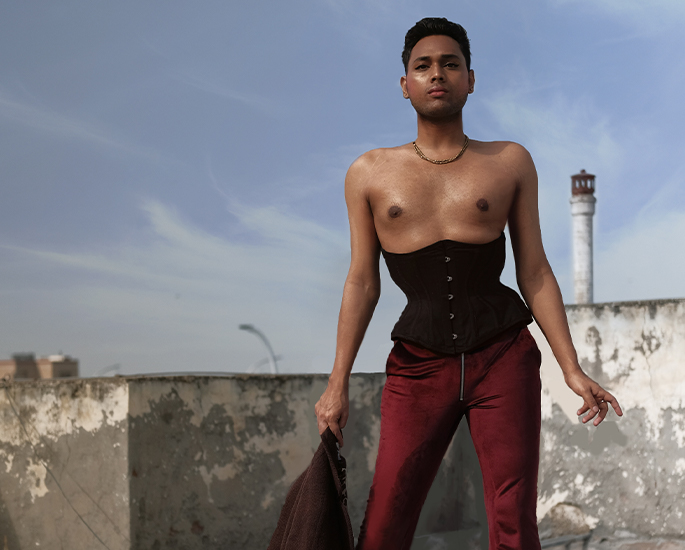 Anwesh is known for his colourful Instagram feed, where he posts his latest fashion favourites, from dresses to bell bottoms.

Alongside posting his couture photoshoots, he also creates beautiful visual designs on his Behance Instagram page.

His love for fashion grew after seeing glamorous gowns worn by celebrities as he explains:

“I was reading an article, and Sonam Kapoor was wearing Jean-Paul Gaultier.

“It was a white structured gown, it was a very beautiful gown, and I looked at it, and I thought it was something really interesting.

He then began to research Jean-Paul Gaultier and discovered something amazing.

“I looked online and found a Jean-Paul Gaultier show from 1995, and he included drag queens, androgynous men, all different kinds of people in his entire fashion show.

“It was not just about clothes, but it was also about self-expression.

“There was a huge group of people, and I had never seen them before.

“People growing up around me would think of them as freaks, but here they were being celebrated, and I felt a connection.

“I have finally found a place where I belong.”

For Anwesh and many others, fashion provides confidence and a sense of acceptance. 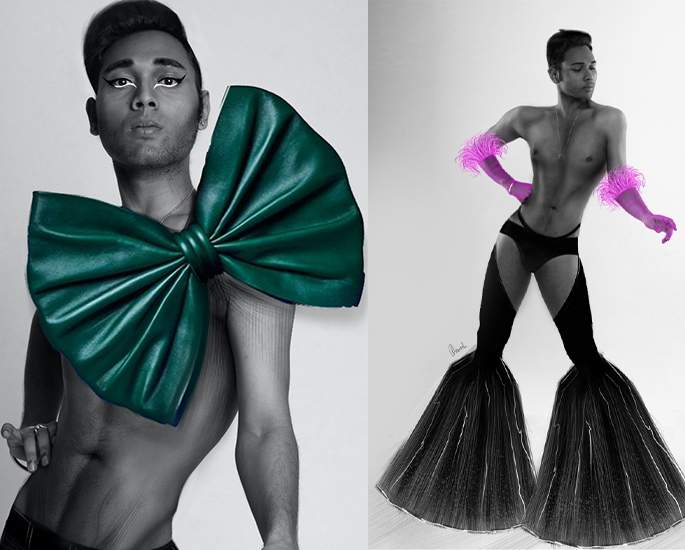 Anwesh describes himself as a “style chameleon”.

He enjoys travelling across the world and visiting different flea markets to find unique pieces.

Alongside denim, his everyday go-to outfit is shirts and flared trousers.

Speaking of unique beads, he says:

“There is a bead specially made in only three places in the world and it is made here in India.

“A lot of women wear it on saris, but it is not as common for men to wear it.

“When I found a place that made them, I was like, ‘I need to get my hands on them’.

“I got them all in different colours.”

It is clear that this influencer is not one to follow trends; he sets them.

Despite being confident in wearing different clothes, Anwesh still understands the potential threat he might be under.

“In India now, especially for feminine gay men, they are the easiest target.

“I have been on social media for a really long time.

“Unfortunately, after all these years, comments have gotten worse, which is very sad and worrying.”

“Someone said, ‘I would rape you and your family members’.

“They don’t realise how harmful those thoughts are.”

In a recent collaboration with a fashion company, Anwesh received mixed reviews.

“I wore beautiful cord pants, which was very 70s, and I wore a corset with it.

“Some people, of course, loved it, especially the people who follow me and know my fashion sense.

“But I got a lot of backlash from men and even women.”

Anwesh was shocked to find women being abusive to him.

However, he understands how many still believe in gender norms and do not question them.

He explains: “Sometimes, you think women wouldn’t say something like that.

“But the fact of the matter is women have also grown up with patriarchal attitudes.

“We are all fed a certain kind of ideology, and sometimes we don’t even realise we have unconsciously given into these patriarchal norms.”

However, he hopes his content and fashion brands will encourage conversations on this topic.

Staying Safe and being a Fashionista

Anwesh believes people should be free to wear what they want and express themselves.

However, he recognises men must saty safe and take precautions in conservative areas.

“I am scared. There are a lot of eyes looking at me.

“I have put myself in vulnerable situations.”

For those who are wanting to experiment with fashion, Anwesh recommends:

“Start with baby steps, in a safe space.

“I brought my first pair of heeled boots online because I was scared to buy in-store.

“Every time I would find a safe space, I would wear what I want.

“So when I was in college, I would take my clothes and then get changed to go home.

Speaking on the importance of fashion, Anwesh says:

“I don’t think we realise how important it is to wear what you want to wear, like accessories and clothes.

“They all make you feel a certain way, and we are all delusional living in our fantasies.”

Anwesh hopes one day there will be no judgement or hate, and people will be able to wear whatever they desire. 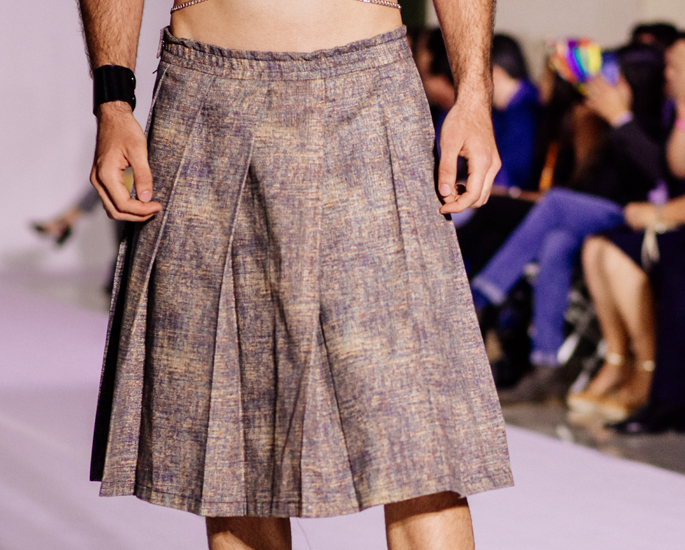 Arguably, Covid-19 and its many lockdowns have removed societal dress codes, and fewer people care about what they are wearing.

Pyjamas to shops and sweatpants to work.

This devastating pandemic has made people less concerned about others opinions.

Society appears to be progressive.

Despite hate still being prevalent online, so is acceptance and admiration.

People operate around a set of invisible clothing rules that support gender stereotypes.

Everyone, especially Desi men, should wear what they want.

Most importantly, what expresses their personality and what makes them happy.

If a Desi man wants to wear nail polish, then why not?

Wearing a skirt does not remove masculinity or suggest they are homosexual.

Desi men should feel free to wear a skirt if they want to, without fear or hesitation.

Harpal is a journalism student. Her passions include beauty, culture and raising awareness on social justice issues. Her motto is: “You are stronger than you know.”
Shanaya Kapoor sizzles in Bikini & Sheer Overlay
Janhvi Kapoor shines in Elle India Cover Shoot