After Daniel Weber uploaded an intimate family picture of his wife Sunny Leone to Instagram, the actress has been caught up in a troll backlash.

"Normalising children towards nudity is a fundamental part of responsible parenting."

A new image of Sunny Leone posted on social media has faced considerable backlash by trolls.

The picture, which was uploaded by Sunny’s husband, Daniel Weber on Father’s Day, is causing much controversy, as Sunny appears to be ‘nude’.

The picture shows the married couple looking relaxed and happy with their adopted daughter, Nisha. Sunny seemingly appears topless in the image as she holds her daughter.

Intended by Weber as a post to be a celebration of his family, he was instead met with a troll backlash.

Since posting the image on Instagram, he has received a barrage of negative comments from the public who have attacked his wife for being ‘inappropriate’.

Followers of Weber have commented on how inappropriate it was for Leone to be seemingly topless in the picture with her daughter.

Check out the post by Weber below to see the family picture, which also appears in black and white.

This is Fathers Day!!! The greatest love one can imagine !!! Thank You @sunnyleone for meeting Nisha Kaur and Falling in Love for both of us !!! You are always the one who knows Best. She is everything and has stole my heart forever !!!! Xoxoxo Thank You !!!!

Weber, who is also Leone’s manager, seemed delightfully happy with the image. Thanking his wife, he praised his family in the description of the image.

“This is Fathers Day!!! The greatest love one can imagine !!! Thank You @sunnyleone for meeting Nisha Kaur and Falling in Love for both of us !!!

“You are always the one who knows Best. She is everything and has stole my heart forever !!!! Xoxoxo Thank You !!!!”

However, it was not long before the unfavourable comments came flooding in. 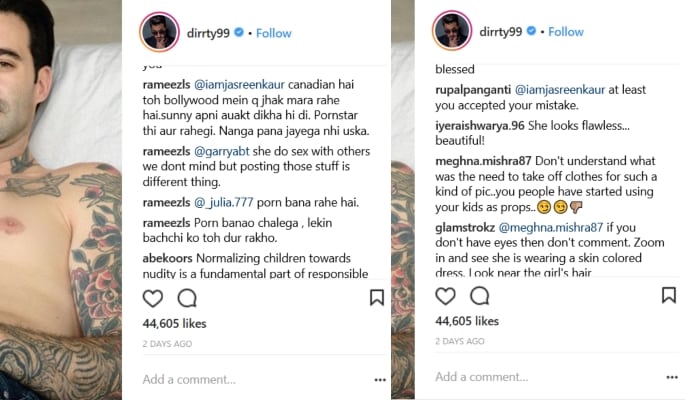 Whilst another Instagram user commented on the picture accusing the couple of objectifying their daughter. They said:

“Don’t understand what was the need to take off clothes for such a kind of pic..you people have started using your kids as props..”

“She do sex with others we don’t mind but posting those stuff is different thing.”

Whilst it is unclear whether the actress is actually topless, fans of the couple came to their aid suggesting their family photo was natural and beautiful.

Supporters of the Family Picture 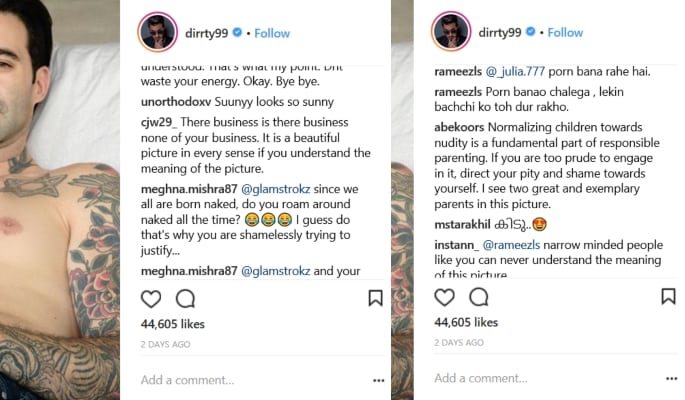 As much as there is a lot of troll backlash against the family picture, fans of the family came to their defence. They labelled the parents ‘exemplary’ and called the picture ‘beautiful’.

One fan of the family picture wrote on Webber’s post:

“There business is there business none of your business. It is a beautiful picture in every sense if you understand the meaning of the picture.”

Another user celebrated the couple as ideal parents for their normalisation of nudity. The user wrote:

“Normalising children towards nudity is a fundamental part of responsible parenting.

“If you are too prude to engage in it, direct your pity and shame towards yourself. I see two great and exemplary parents in this picture.”

Interestingly, another post on Weber’s Instagram shows him pictured with his twin boys, which he and Sunny had via surrogacy:

Although it is a similar setting to the previous image, the comments from followers have been a lot more positive.

It appears then, that the criticism over the image of Nisha with Sunny, is down to Sunny’s minimal clothing.

The troll backlash that Sunny and her husband are experiencing is seemingly borne out of the over-sexualisation of nudity and Leone’s previous career.

This has caused family photos, like Weber’s, to be negatively viewed by some people.

Daniel and Sunny have yet to respond to the varied comments from their followers.