Sukhchain Singh married again with the desire to have children but instead, his new wife and friends blackmailed him, resulting in his suicide.

Sukhdeep Kaur, Jyoti and Aman have all been booked

After 15 years of marriage, Sukhchain Singh, aged 40, yearned to have children.

Sukhchain was not happy in a childless marriage. Therefore, he decided to marry once again.

Sadly, this step eventually took his life, after he committed suicide being blackmailed by his new wife and her two friends.

Due to the blackmail from these women, Sukhchain Singh killed himself by jumping into the deep Bhakra canal, which runs through the Khanauri branch.

He left a suicide note, which highlighted the blackmailing and scam imposed on him by the women and details with photos of their identification.

He was taken to Samana Civil Hospital where he was pronounced dead and taken for postmortem.

Sukhchain Singh was the son of Kashmir Singh, originating from the village Sarola, Kaithal, which is located in the neighbouring state of Haryana, to Punjab.

Sukhchain’s brother, Angrez Singh, told media that after his first marriage, he was very unsettled and anxious due to not having any children for 15 years.

Knowing about his need and desire to want children, a year earlier, the wife of a friend of his, introduced him to her relative Sukhdeep Kaur Namak for marriage.

Sukhchain’s marriage was agreed with Sukhdeep and they got married.

Then in accordance with his new wife’s wishes, they began to live together in a rented house in the Cheeka area of the district of Kaithal in Haryana. 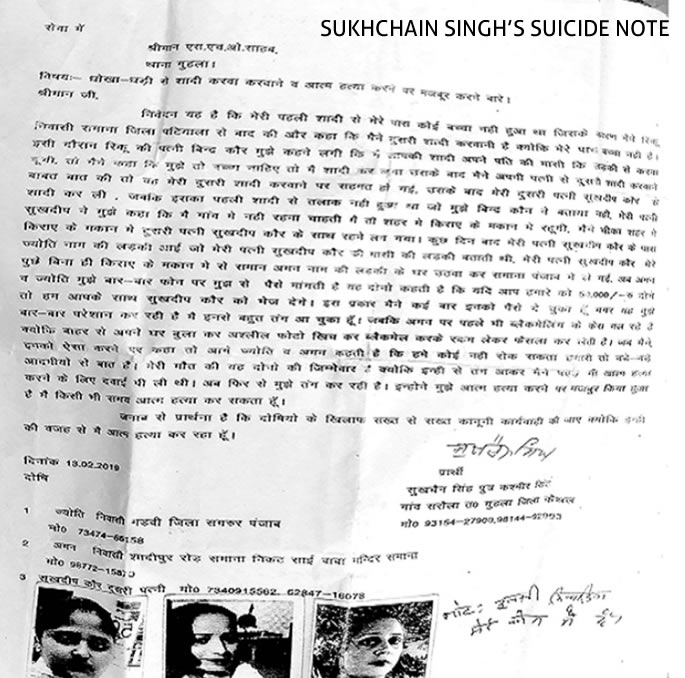 According to Angrez Singh, he said that after some time, two women friends of his new wife, Sukhdeep Kaur, came into their life.

The friends, ‘Jyoti’ from Mandvi in Sangrur, Punjab, and ‘Aman’ from Maisar Mandir Road in Samana, convinced the couple to move to their house.

They came to Cheeka and collected all their belongings and took Sukhchain and Sukhdeep with them to the Maisar Mandir Road house in Samana.

Sukhchain was not fully aware of what was going on between Sukhdeep and her friends but went along with it all, and moved.

This is where the two women, began using different methods and means to get money from Sukhdeep’s brother.

This seemed like a reason for moving Sukhdeep and her husband into their house.

After some time, when Sukhdeep’s brother could not meet their demands any more, the two women suddenly stopped Sukhchain from seeing Sukhdeep.

Not allowing him to see her, he was devastated.

The women then turned on him and started to blackmail Sukhchain with stories about him.

It then transpired that Sukhchain discovered that all three women, including his wife, Sukhdeep, were actually involved in this scam to get money out of him.

He had been betrayed. This began to affect Sukhchain mentally greatly as he felt caught up in a trap and was troubled by it all.

Prior to taking his life, he had previously, two months earlier, reported the scam and blackmailing by the three women at the Guhla police station in Haryana.

However, after his report, the police did not take him seriously or act upon the blackmailing and scam inflicted on him by these women.

So, feeling completely helpless, on April 20, 2019, Sukhchain Singh jumped into the canal and commited suicide.

Police have reacted to the case. Inspector Gurpreet Singh Handa told media the action being taken.

He said based on the statement of Sukhchain Singh’s brother, and his suicide note, the three women, Sukhdeep Kaur, Jyoti and Aman have all been booked under the Indian Penal Code, section 306 – Abetment of suicide.