"It is completely private. There will be no valima ceremony."

The Nikkah, the Islamic wedding ceremony, was conducted by Mufti Saeed at Imran’s Bani Gala, Islamabad residence. The wedding was a private affair with no valima ceremony (marriage banquet) and no invites to guests.

Speaking to reporters, Mufti Saeed said: “The good news you have been waiting for, I have come here for that.” 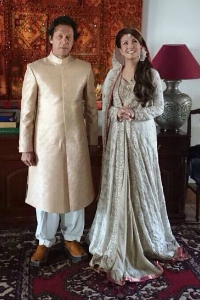 He added: “Imran Khan asked me to speak on his behalf to the media. His Nikkah just happened and the witnesses included Aun Chaudhary, Zakir Khan, Reham’s friend Aziz and others.”

Imran Ismail, leader of the Pakistan Tehreek-e-Insaf (PTI) Party, confirmed that Mufti Saeed had conducted the Nikkah, and that only close friends and family were in attendance.

Ismail said: “The event was a low key affair because we did not want to celebrate due to the Peshawar school massacre.”

Jehangir Tareen, a close confidante of Imran Khan, and a high ranking member of Imran’s PTI party, said even party leaders had not been invited.

Tareen said: “It is completely private. I have not been invited, neither has anyone else. There will be no valima ceremony. Instead, food will be given to madrassahs.”

Imran Khan was congratulated by his former team mate and protege, Wasim Akram, who tweeted:

Good on you Skipper ,Congratulations! My family and I wish you all the happiness with your blessed new life #secondtimearound #goodonyou

Just over a week ago, on 31st December 2014, Imran down-played his marriage rumours tweeting, “The reports of my marriage are greatly exaggerated!”

On Tuesday 6th January 2015, he held a press conference at his 200-acre Islamabad estate. There he defended his decision to marry Reham Khan and said that ‘marriage is not a crime’. 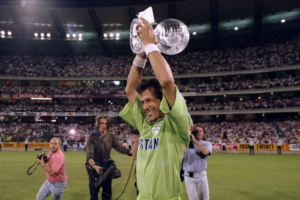 In the final against England, Khan’s 72 runs was the highest score. He was inducted into the ICC Cricket Hall of Fame in 2010.

After retiring, Khan has become one of the most high-profile figures in Pakistan due to his philanthropy and growing political stature.

Reham Khan, 43, was born in Libya to Pakistani parents, and spent much of her life in the UK. She has worked for several media outlets in Pakistan, and is currently presenter of ‘In Focus’ on Dawn News.

Before moving to Pakistan in 2013, Ms Khan had previously worked for BBC South as a weather presenter, and as a local radio presenter in Worcestershire. Reham has three children from a previous marriage to a British born doctor.

This is Imran’s second marriage, after having previously been married to Jemima Goldsmith. He recently visited Jemima in London to spend time with his two sons.

He said that one reason why it had taken him so long to remarry, was because of the impact that it could have had on them. Imran said:

“I didn’t think of my marriage for 10 years after my divorce because my children were small. I do not ever think of hurting my children’s feelings.”

Jemima’s decision to revert to her family name was because Imran had plans to remarry. She said: “My ex-husband, Imran, recently announced that he intended to get re-married soon, which made me think it’s probably time to change my name back to Goldsmith.”

Jemima is still viewed favourably by many Pakistanis and she has received an outpouring of love on social media. One tweet which captures this sentiment reads: “U will remain the First Lady Ma’am. No-one like Reham can replace you!!” 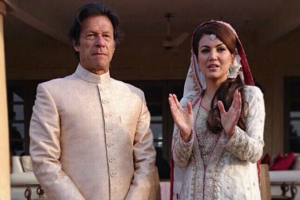 With his status in Pakistani society and the political arena, there are those that believe that decisions made in his private life also affect the country at large.

Supporters of Mr Khan have wished him well as #BestOfLuckIK has gained more than 11,000 retweets in 24 hours.

However there had also been a backlash on social media in Pakistan. Reham Khan has been the target of brutal attacks against her character. Facebook groups had been set up to vent vitriol against her. Old photographs of her had been criticised.

Photographs of Reham sitting next to a female friend were followed by a caption which read: “Reham Khan drunk at a private party, rubbing a woman’s back. Is she a lesbian now?”

Other images which have drawn the ire of the public include one in which Reham is wearing a knee-length dress at a horse race, and another in which she is performing the tango on a BBC television show. Her opponents claimed that a photograph of her in boutique was taken in a sex shop.

These attacks had left Reham feeling ‘very disturbed’, according to a producer at Dawn TV. She has since responded and said that some of these photographs have been faked.

One would think however, that the relevance of these issues will fade as the happy newly-weds celebrate their marriage.

We at DESIblitz would like to congratulate Imran Khan and Reham Khan, and their friends and families.

Images courtesy of EPA and AFP