An optician who allegedly killed three family members claimed that her sister had been abused during her marriage and it had been ignored.

"How long did he think he would get away with it?"

An optician detailed her sister’s abuse in a Facebook post just minutes after she killed three family members.

Mohamad and Sanjar were shot at a house in Lynn, Massachusetts, while Abdul was killed in his vehicle whilst parked on a street less than a mile away.

Less than 10 minutes later, Sharifi took to Facebook to claim that her twin sister’s husband, believed to be Sanjar, had “choked, slapped, kicked and swore” at her before he “punched her in her face”.

She also alleged that her father had been “verbally and financially abusive” to her mother.

Sharifi then took her own life. Her body was found inside her car parked outside a Stop & Shop store.

Her post stated that her sister had been abused for the entirety of her 14-year marriage. However, it was ignored by her relatives.

The post said: “My parents and his parents knew all these years but have not really done much but say ‘work it out’, ‘what will people say if you separate’ or even victim blaming.

“I’m trying to say all this as nice as I can so my post doesn’t get deleted. There’s no excuse for what he did.

“He kept doing it because no one did anything about it. How long did he think he would get away with it?

“They don’t realise that abuse can affect someone not just physically but also mentally. No form of abuse is ok.”

Sharifi also spoke directly to her sister, with the message continuing:

“To my sister: I hope you start healing and actually teach your daughters that abuse is not ok as they have also witnessed him slap you.

“I asked how they felt about that and they said they were scared and didn’t know what to do. Let’s not pass this on to your kids as it has been passed on to you.

“My father has also been abusive before and verbally but mostly financially abusive to my mom from what I’ve personally witnessed.

“Maybe that’s why my mom did not protect her own daughter because she’s a victim too.

“But that’s no excuse, how can you let your own daughter get abused.”

Essex District Attorney Jonathan Blodgett confirmed how the four people were related. He also indicated that they had been using a translator to speak to relatives.

One family friend said they were shocked to hear about the incident and that it was “not in (Khosay’s) nature to be a killer”.

However, they noted that the sisters had a “rough upbringing” and “Khosay probably had enough and that triggered her because she didn’t want her nieces to follow that pattern”.

They said that “never in a million years” did they think their friend was in an abusive marriage.

“It’s crazy how you never really know what people are going through.

“The girls had a kind of a rough upbringing and Khosay not a horrible person.

“Their world is different from others and they really have it tough. They didn’t really have a voice.

“Their parents had a lot of control over their life.

“Her sister had it the worst, she had her hands full. Her husband didn’t seem too helpful.

“She wore a lot of hats. The cook, the maid, the nanny, the driver. She did everything.

“Khosay said that her sister told her about the abuse and she then told her mother about the situation, and she didn’t do a thing.”

The friend said they told the sister to leave her husband or call the authorities, but said:

“I think she was scared.” 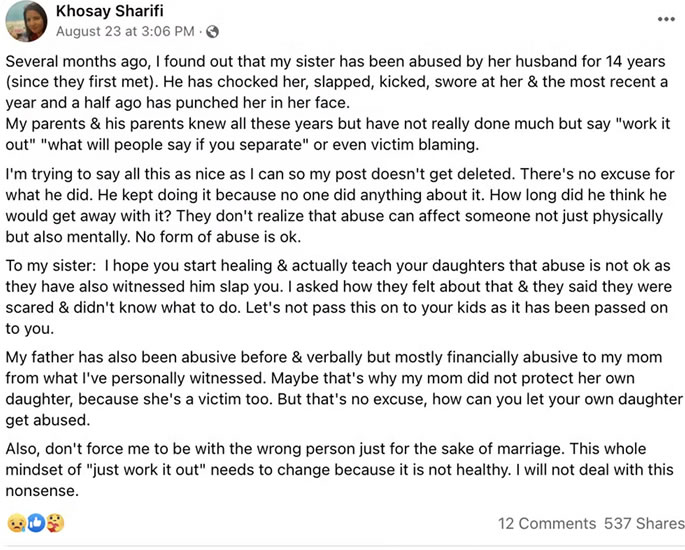 Sharifi’s post concluded: “Also, don’t force me to be with the wrong person just for the sake of marriage.

“This whole mindset of ‘just work it out’ needs to change because it is not healthy. I will not deal with this nonsense.”

A GoFundMe page has been set up by the family to raise money for the funerals of the four family members. It has raised over $20,000 so far.

The Sharifi family posted on the page: “We have lost four loved ones in devastating and unforeseen circumstances.

“Time and time again, mental health is demonstrated to be such a prominent issue in society.

“Abuse of all types takes a significant toll on individuals affected, and leads to damage and loss in many ways.

“Our family was a victim of this scenario, and now two young children are fatherless. We are absolutely traumatised, heartbroken, and lost.

“We are struggling to raise funds to cover the cost of the burials. As you may know, burials are expensive, and now we are scrambling to gather funds to cover four.

“We also have to financially support two young children and ensure they receive adequate care to process this loss.”

Dhiren is a journalism graduate with a passion for gaming, watching films and sports. He also enjoys cooking from time to time. His motto is to “Live life one day at a time.”
Pilot charms Netizens with English-Punjabi In-Flight Announcement
US Indian Women Racially Abused & Threatened to be Shot