An illegal immigrant has been imprisoned for subjecting a young woman to a horrific sex attack in which he raped her three times in a park.

"She told him no and told him to leave her alone."

Illegal immigrant Gurpal Singh Gill, aged 33, of no fixed address, received a total custodial sentence of 17 years and three months after he raped a young woman three times in a Leicester park.

Leicester Crown Court heard he targeted the 20-year-old woman while she walked her dog at Watermead Park.

Gill was caught after the victim made a 999 call as she was dragged to a secluded wooded area, covertly taking a photo of him and trying to pacify him.

Alex Young, prosecuting, explained that earlier that day, police were called to an address in Belgrave where a male (Gill) was acting aggressively.

As one lone officer spoke with the resident downstairs, Gill jumped out of an upstairs window to escape. Gill later said he did that because of his status as an illegal immigrant.

The woman walked her dog while wearing her headphones and listening to music.

Mr Young said: “She had no idea of the ordeal awaiting her at the hands of the defendant, a total stranger.

“The defendant accosted her and tried to speak to her and she initially thought he was asking for directions.

“He asked her for a hug and grabbed her breasts and bottom.

“She told him no and told him to leave her alone.

“He pulled her back into a bushy wooded area and restrained her by putting his hand over her mouth.”

Gill then told her: “Shhh, I will kill you.”

The woman resisted as best as she could and dialled 999 as the 14-minute long incident unfolded.

Mr Young said: “Repeatedly she was threatened, she was screaming and was in great distress.

“The police weren’t able to track exactly where her phone was but traced where it was subscribed to.”

The first rape stopped when a cyclist went past the bushes but was not near enough to see what was going on. The woman told Gill that people were nearby and she needed to go home. 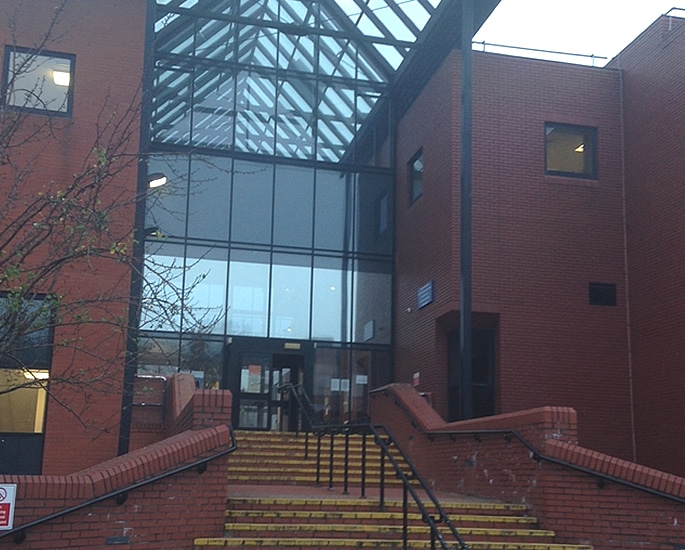 Gill, who appeared to be drunk, held on to her as they walked out from the bushes.

He then took her to an isolated wooded area where he raped her again.

Mr Young added: “She was afraid but continued saying ‘no, no’ and resisting.

“She was equally mindful of the threat to kill her.”

The woman later told the police that she thought he might kill her.

She tried reasoning with Gill and the attack stopped. He asked for her name and she gave him a false one.

The woman agreed to exchange phone numbers using a missed call so she would have a record of his phone.

Her dog had been let go during the rape but was close by.

The victim told the police: “He knew what he was doing was wrong, but he just didn’t care.”

Mr Young said: “Meanwhile, officers had scrambled to her home address and spoke to her mother who was understandably distressed to hear what had happened.

“By this time her daughter was free and an officer found her in Bath Street at 7:15 pm.

“She had bits of leaves in her hair and clothing and was visibly upset and immediately told the officer she had been raped.”

“She suffered bruising, lacerations and had multiple scratches.”

Gill fled to London before handing himself into police three days later, saying he was wanted in connection with a fight.

He claimed the incident was consensual but he was asked about the 999 call contradicting his claim, he could not explain his actions.

The illegal immigrant admitted raping the woman three times and three counts of sexually assaulting her.

The victim did not want her impact statement read in open court but it was read by the judge.

It was revealed that the attack had a huge effect on her family relationships and her career. She did not attend the hearing, but her mother was in the public gallery.

The court heard that Gill, who had illegally been in the UK for seven years, was wanted in Germany for two alleged sexual incidents in 2014.

One was with an 11-year-old girl he took to some woods but was interrupted by a passer-by. The other was that he grabbed another girl and dragged her into a shop doorway.

In mitigation, Sunit Sandhu explained that Gill should be given credit for pleading guilty and giving himself up to the police.

Judge Robert Brown said: “This young lady showed considerable presence of mind because she retained composure in what was a horrendous ordeal and employed survival strategies.”

He told Gill: “This was a prolonged and serious sexual assault in two separate locations.

“You raped her in the bushes and threatened to kill her. She submitted out of fear and the need to survive.”

Judge Brown explained that Gill posed a risk of serious harm to others in the future.

Gill, who had the proceedings translated by a Punjabi interpreter, was informed that he would likely be deported from the UK after his sentence.

Leicester Mercury reported that the illegal immigrant received a custodial sentence of 11 years and three months as well as an additional six-year licence period.

Dhiren is a journalism graduate with a passion for gaming, watching films and sports. He also enjoys cooking from time to time. His motto is to “Live life one day at a time.”
The Asian Media Awards 2019 Finalists
Women jailed for Spouse Visa Scam to Bring Partners to UK