‘I For India’ Relief Concert raises an amazing Rs 52 crore

Karan Johar has revealed the amazing response the ‘I For India’ relief concert has received after collecting Rs 52 crore so far.

“I for India continues to get overwhelming attention"

The relief concert was held in support of frontline workers amid India’s battle against COVID-19.

I For India was live-streamed on Facebook on Sunday 3 May 2020 and featured a host of Bollywood and Hollywood celebrities.

During the I For India relief concert, Amitabh Bachchan paid tribute to his late friend and actor Rishi Kapoor who recently passed away.

Shah Rukh Khan and Hrithik Roshan turned singers for their segments in the relief concert which certainly delighted their fans.

Sharing his delight and appreciation for the support, Karan Johar said:

“Thank you to all the artists who performed and spoke from their hearts for #iforindia!

“Zoya and I are overwhelmed by all the love and humanity that surrounds us.

“Gratitude to have friends and family that have been so supportive through this journey and a massive shout out to Jairam and his team at Fountainhead for being such staunch make solid pillars and also to the two of you (you know who you are) you both have been the wings and the soul and spine of this concert!

“We can! We will! We must! Express our gratitude to the world for their generosity! Keep the river of goodness flowing …” 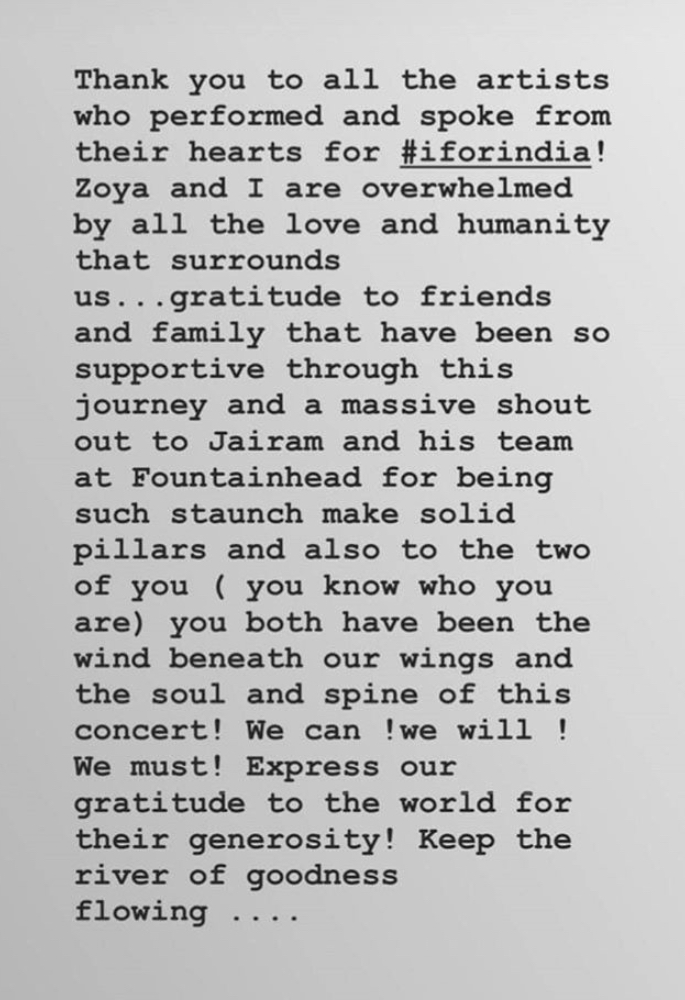 Karan Johar also took to Twitter to share the figures of the latest tally for the relief concert. He said:

“I for India continues to get overwhelming attention and support from the world over. 100% of proceeds go to GiveIndia for COVID-19 relief work.”

“#IForIndia started out as a concert. But it can be a movement. Let’s continue to build a safe, healthy & strong India. I For India. Please donate.”

From our hearts to yours. Thank you for watching. Thank you for responding. Thank you for donating. #IForIndia started out as a concert. But it can be a movement. Let’s continue to build a safe, healthy & strong India. I For India. Please donate https://t.co/yzXMagyy3z@GiveIndia pic.twitter.com/MTGxXi3kgk

Many of the stars who participated in the relief concert like Akshay Kumar, Katrina Kaif, Kareena Kapoor Khan and many others also thanked their fans for “watching, responding and donating.”

The I For India relief concert has certainly proved a success and will help India in its fight against the coronavirus pandemic.