Bollywood celebrities among hundreds of others took to Twitter to share their first earnings as the topic #FirstSalary trends.

As a result, netizens went down memory lane

It may not be the first of the month but on November 18, 2020, conversations and screenshots about people’s first salaries were trending on Twitter as #FirstSalary became a topic of discussion.

It began when a Twitter user from Bengaluru asked people to post the details of their first paycheck.

The user also asked people to mention the age at which they received their first salary, where from and the amount.

Soon, many people around the country, including politicians, bureaucrats and celebrities joined in.

While some just mentioned these three aspects, many spoke about how much it meant to them.

As a result, netizens went down memory lane and the hashtag #FirstSalary was trending.

What was your first Income, source and at which age??

Filmmaker Anubhav Sinha, who directed films like Mulk, Article 15 and Thappad revealed that his first salary was at the age of 18.

He shared that as a teenager he received Rs. 80 (£0.80) for giving arithmetic tuition to a 7th-year student. The salary was to fund his smoking habit while he was studying at an engineering college.

First Salary- Rs 80
Age-18
Arithmetic tuition to a class 7 student to earn for my smoking in the Engg college. https://t.co/SmxrV3E2Xf

Filmmaker Hansal Mehta replied to Sinha’s post and shared that his first income was at the age of 16 and he earned Rs. 450 (£4.50) as a retail assistant, selling jeans and casual wear.

Director Umesh Shukla, who has directed movies like Amitabh Bachchan’s 102 Not Out and Akshay Kumar’s OMG: Oh My God! also took to Twitter to reveal his first salary.

He shared that his first income was Rs. 35 (£0.35) per show as he was working backstage for director Mahendra Joshi.

Getting inspired by Bollywood celebs, others came forward with their #FirstSalary stories too:

“Job: Given by dad for finishing a glass of milk every day.”

While many were inspired after seeing the top Bollywood celebrities’ first earning, others took the opportunity to come up with funny memes.

One social media user shared a meme which stated that while everyone is sharing their first salary, he remains unemployed despite graduating as an engineer.

Everyone sharing thier first salary on timeline.??
Me who is engineering graduate and still unemployed :- pic.twitter.com/QIJj2H3202

Another person shared a meme which many medical students could relate to.

“Meanwhile MBBS students at 23 seeing age at first salary memes: Wait, you guys are getting paid?” 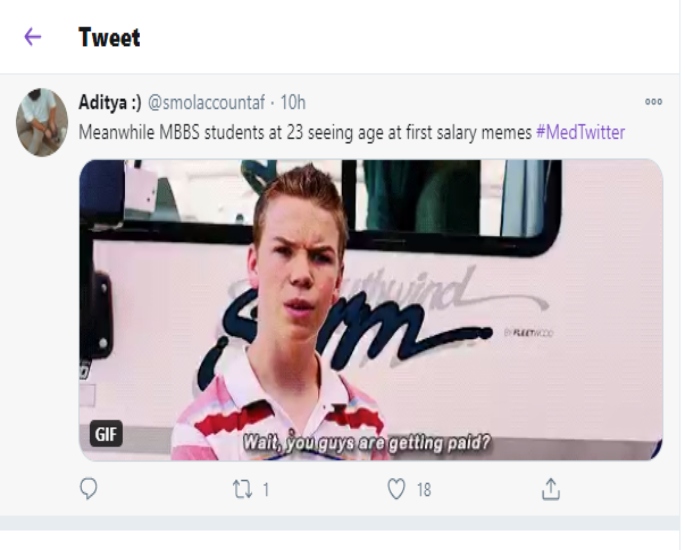 Others threw shade at Bollywood celebrities. One shared a picture of Sara Ali Khan and said that her source came from crying and begging to Rohit Shetty.

#FirstSalary has been a trending topic for many in India, however, some could not help but make memes.

Akanksha is a media graduate, currently pursuing a postgraduate in Journalism. Her passions include current affairs and trends, TV and films, as well as travelling. Her life motto is 'Better an oops than a what if'.
Kangana and Rangoli face 3rd Summons from Mumbai Police
Imran Khan bids Farewell to Acting Career?