The future is here for Asian men with high-tech sweat-proof clothes! Helping prevent men sweat, the clothes are designed by the Ministry of Supply (MOS), using the same materials as NASA does for their spacesuits.

“It’s sort of like Under Armour for dress shirts.”

Due to the high climate and relentless heat in India, Pakistan and even the UK, sweat during the summer months is a major concern for Asian men, and the people around them.

However, for every uncle who has found himself wearing a sweatshirt (pun intended) a solution may be on hand.

Founders of clothing chain Ministry of Supply (MOS) have been working hard in creating high-end dress-shirts and trousers to help men sweat less. 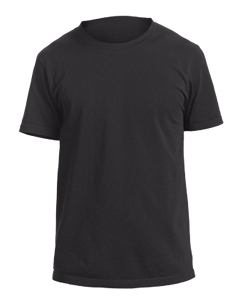 The outfits have been made using the same materials that can be seen utilised by NASA when creating their US spacesuits to help regulate body temperature.

The space-age apparels work by using phase-change materials (PCM) that, depending on the surrounding temperature either absorbs or releases heat from the shirt itself, helping to reduce sweat output in situations involving high temperatures and hot climates.

This is great for the Asian man working in the office during the long and hot summer months in Mumbai and Karachi.

Or even the uncle who doesn’t want to leave the dancefloor after busting out many moves on hearing his favourite golden oldie, and the aunty who has the unenviable job of pulling him away.

The thermal image from Quartz.com (pictured below) helps give a better idea of where the body gives off the most heat. The orange sections showcase the areas where men perspire the most.

From the image it can be seen that the upper body, specifically around the shoulders as being prime areas for sweat release. 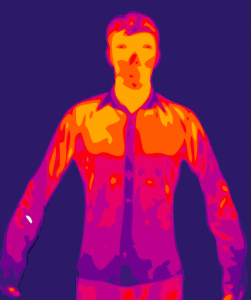 To counter this MOS’ have also released an Atmos t-shirt (pictured below) which consists of technology to ventilate these areas the most and allow the t-shirt to breathe, as well as the people around the t-shirt.

Retail analyst Sucharita Mulpuru believes that: “It’s sort of like Under Armour for dress shirts.”

In terms of price an Atmos t-shirt from the Ministry of Supply currently retails at $28 (£16.95) and is available in a range of colours and sizes for men of different shapes, sizes and tastes.

In addition to t-shirts and dress-shirts, MOS have also created a range of other menswear such as chinos, slacks and socks that are again designed to prevent sweat.

With the release of smartphones and smart TV’s, we are moving towards a new range of smart-clothes. However the foundation for this type of t-shirt can be seen in Adidas’ climacool range that had been created for athletes to help with their performance in sports by keeping and releasing heat when necessary.

The release of MOS’ clothing sees it join the likes of other clothing brands such as Timberland and Jockey who also use the PCM technology in their respective clothing ranges.

Within today’s clothing market there are visible signs of companies using technology on a regular basis when manufacturing clothes to help not only ensure the wearer is comfortable and looks good but also sweats less and smell fresh.

The collaboration between clothes and technology is growing and expanding into different areas with no signs of stopping, spelling good news for those uncles who sweat and are not partial to deodorant.

Amarjit is a 1st class English Language graduate who enjoys gaming, football, travelling and flexing his creative muscles writing comedy sketches and scripts. His motto is “It’s never too late to be who you might have been” by George Eliot.
Apple releasing iPhone 6 and iWatch together
India opens Internet De-Addiction Centres