With the rising number of Internet users in India on a daily basis, support centres have begun to open to help tackle Internet addiction among the young population.

With drug, alcohol, and sex-related issues continually making the news rounds, the new addiction in town is the Internet!

In an attempt to clamp down on the rise in Internet dependence, India has begun opening a series of Internet de-addiction centres in a number of its major cities, including Delhi and Amritsar.

The centres are designed to help young Indians who find themselves addicted to the Internet, also known as Internet Addiction Disorder (IAD) or Compulsive Internet Use (CIU).

The Internet community in India has been rapidly rising by 28 per cent each year, and in June 2014, it was thought that there 243 million online users in the country alone. 76 per cent of this is found to be coming from mobile users. 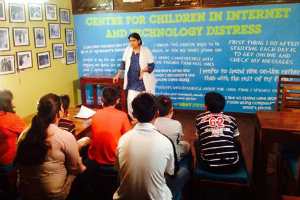 Speaking about the growing issue, leader of the Amritsar De-Addiction centre, Dr. JPS Bhatia says: “The internet addiction in the present scenario is the most popular form of addiction which has enveloped every strata of society.”

Such a huge number of regular users has also made Internet addiction one of the most popular new forms of addiction, with younger generations being exposed to the on-line world from very early on.

Speaking from the Delhi centre, Dr. Tara says: “Teenagers are particularly prone to internet addiction. In many cases, the addiction leads to insomnia, depression and social withdrawal.”

Interestingly, children and teenagers between the ages of 12 and 15 become used to using the Internet on a regular basis – both daily and even hourly with the easy acquisition of smartphones and portable technology, which are now regular feature in every household.

Also with the boom of social media and online gaming, many young people have managed to incorporate the Internet as an essential part of their daily routine. 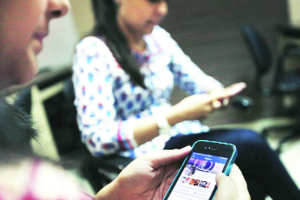 As Dr. Bhatia explains, this has regular consumption of online activity means that by the time the children reach 18 to 25, they are devoted users.

In general, these young people have poor attention spans, higher rates of memory loss, and can even feel depressed and frustrated. In addition, it was also found that their academic performance also fell to below average.

It was also found that people began to depend on the Internet in the same way as they depended on food or sex, and some psychologists have labelled the addiction as a mental illness.

The National Institute of Mental Health and Sciences (NIMHANS) in Bangalore, found that 73 per cent of teenagers suffered from ‘psychiatric distress’, and that ‘children in the age group of 13 and 17 are mostly addicted to Facebook’.

Psychology Professor at Guru Nanak Dev University, Dr. Sonia Kapoor adds: “These people use virtual fantasy world to connect with people as a substitute to connect people in real life.” 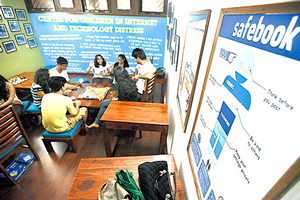 Agreeing with Dr. Kapoor, Dr. Tara added: “We come across many children who try to make virtual friends because in real world they have few people to talk to.

“In many case, these kids have both parents who are working. In some cases, internet overuse is seen in parents of such children.”

Most doctors and researchers have found that parents are to blame for not monitoring their child’s use of the Internet appropriately. In one case, clinical psychologist, Diana Vivin explained:

“I have treated a girl who was addicted to Facebook. Her parents had complete trust in her and they never used to monitor how many hours she was spending browsing the net.”

“It is only when she started showing dysfunction in academics and social life, and other physical problems like eye strain, that they decided to consult a doctor.”

Dr. Kapoor added that children needed to be taught from a very early age the dangers of high Internet consumption, so that the chances of addiction would be lessened:

“Besides providing symptomatic treatments we need to change the social system and inculcate social values among children from early childhood,” she said.

The new de-addiction centres offer device-free retreats, and also include indoor and outdoor games, and group activities where young people are encouraged to interact with each other.

Following in the footsteps of the Delhi centre, the Punjabi city of Amritsar will open its first Internet de-addiction centre on September 5, 2014.

It is hoped that young Indian users who are addicted to the online world will learn to use the Internet in moderation.

Aisha an English literature graduate, is a keen editorial writer. She adores reading, theatre, and anything arts related. She is a creative soul and is always reinventing herself. Her motto is: “Life is too short, so eat dessert first!”
Clothes to help Men Sweat Less
Does the iPhone 6 appeal to British Asians?