Donald Trump takes the White House in a shock victory against democratic Hillary Clinton. DESIblitz has more on the subject.

With a 279 presidential majority over Clinton’s 228, Trump soared to victory.

Donald Trump took the world by storm with his shocking victory over Hillary Clinton. He now becomes the 45th president of the United States.

Despite a controversial campaign, and an almost assured victory for Clinton, it was Trump who finally put an end to the wait. With a 279 presidential majority over Clinton’s 228, Trump soared to victory.

The Senate vote fell to 48 for the Democrats, compared to the Republicans 51. After winning Florida, there really was no contest. Ohio was another big win for the business mogul, along with Texas, Oklahoma, and Pennsylvania.

The successful new leader has only just been elected. But angry protesters speak of leaving America for Canada. The official website of Citizenship and Immigration Canada broke down over too many people trying to access it at once.

Riots broke out all across the U.S. with students and teachers in California walking out of classes in protest. Sabby Dhalu of the Stand up to Racism Group, said:

“The danger now is racists across the globe feel emboldened by Donald Trump’s victory and racism and sexism become normalised through the most powerful figure in the world.”

Trump was born and raised in New York. He started his business career alongside his father, and eventually took over the Trump Organisation in 1971. His career flourished over the years, and Trump even made a cameo appearance in the movie Home Alone 2. 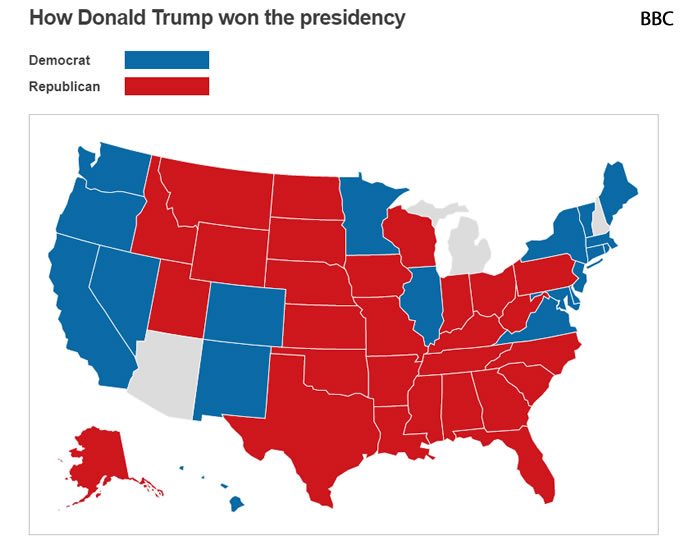 He announced his candidacy for president in June 2015.

The polls predicted how far ahead Clinton would be. FiveThirtyEight ran an election result prediction. Their prediction – a majority of 71.4% to Clinton, over Trump’s 28.6. The figures may have suggested to Clinton that she need not campaign as much in areas where she was assured a victory.

Clinton’s chance at a win in Pennsylvania is shown to be at 77% by FiveThirtyEight. This is one of Trump’s major wins.

Thomas Edsall asked in the New York Times: “How many people support Trump but don’t want to admit it?”

This question by Edsall may be one of the reasons the polls were misinformed. Nobody had seemed to take account of the silent voters. Voters that until now had cowered away and hidden their choice of president.

The white vote lay at Trump’s feet. The people who voted for Barack Obama in 2012, voted for Trump this year. Ohio voted for Obama by 20 points of a lead. This is equal to Trump’s victory.

However, controversies within Trump’s campaign cannot be forgotten. During his launch evening in June 2015, Trump admitted his plans for a wall to be built between America and Mexico. He said:

After his first Republican Debate, Trump apparently mocked Fox News Host Megyn Kelly. He stated: “She gets out and starts asking me all sorts of ridiculous questions…there was blood coming out of her.” This assumed reference to Kelly’s menstruation proved quite a jab at women all over the world.

On December the 7th 2015, Trump made a shocking statement regarding Muslims. He said he was: “Calling for a total and complete shutdown of Muslims entering the United States.”

It is not just Trump’s campaign filled with controversies, but also the accession to the White House. Notably, the KKK in North Carolina announced a Donald Trump victory parade. On their website, they mention:

“Our goal is to help restore America to a White Christian nation.”

Although they condemn any harmfulness to anyone of any race, they clearly state their preference to live separately from anyone not white.

Despite the controversy, Trump received many happy congratulations on his win. Russian PM Vladimir Putin was happy with the result, stating: “It is not an easy path, but we are ready to do our part and do everything to return Russian and American relations to a stable path of development.” 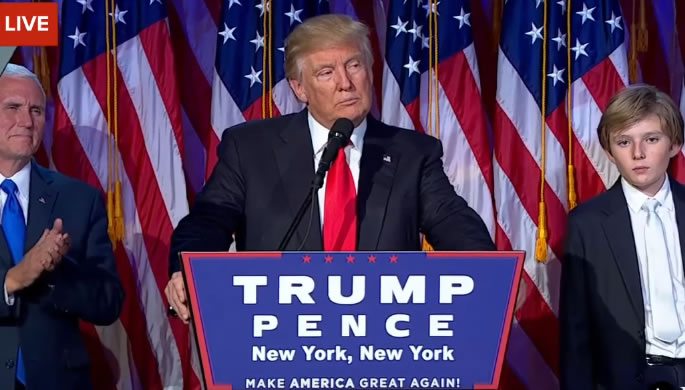 Narendra Modi, PM of India, congratulated Trump on Twitter, stating: “We look forward to working with you closely to take India-US bilateral ties to a new height.”

The Pakistani PM Nawaz Sharif was seemingly overjoyed. He congratulated the new President, saying it is: “indeed the triumph of the American people and their enduring faith in the ideals of democracy, freedom, human rights and free enterprise.”

Theresa May, the UK’s PM also congratulated Trump on his victory. Stating: “I look forward to working with President-elect Donald Trump, building on these ties to ensure the security and prosperity of our nations in the years ahead.”

Trump’s win does not sit well with many people both in and outside of America. His win could mean a divide between people of different races. His win could stem an economic crisis, as his experience of the economy is low.

But, for Britain, it could possibly bring out a post-Brexit deal. Also, it’s questionable whether Trump will even carry out any extreme measures against minorities. His campaign was full of the patriotic words the people of America wanted to hear.

Although, many people may claim to be unhappy with the result of the election, there is no denying that Donald Trump is now the U.S. President. The people of America have made their choice.

Your view on Donald Trump winning the 2016 US Election?