Dan Brown has made his first visit to India since he was only 19. He spoke to a packed house in Delhi, giving the Annual Penguin Lecture on Monday 10th November 2014.

Dan Brown, the world famous author of bestseller The Da Vinci Code, Angels and Demons, Inferno and The Lost Symbol, visited India on Monday 10th November 2014, for the first time in over 30 years.

The author originally visited India when he was 19 years old, but returned finally to the country to deliver the Penguin Annual Lecture 2014.

Over 1,000 people turned out to the Asian Games Village complex, where the event was being hosted, to hear the writer speak. He told the crowd of his emotional ties to India, and said: “I feel like I’ve come home.”

Brown rarely gives public addresses, but this was clearly a special occasion. His talk centred on the influence of his childhood on his body of work.

Walking onto the stage, he began with an anecdote about the first book he wrote, as a very young child: “I was five years old, I dictated it to my mother who wrote it down, bound it with yarn and we had a print run of one copy. 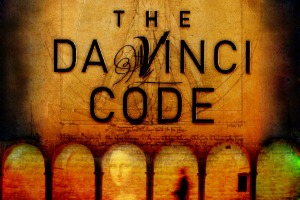 “It was called ‘The Giraffe, The Pig and The Pants on Fire’. It was a thriller, obviously.”

Amusing the audience, Brown went on to recall how he was brought up in a family where religion and science happily coexisted. His mother was religious and ran the church choir, and his father was a maths teacher and textbook writer.

To illustrate how his parents thrived on the mix of religion and science, Brown showed the audience his mother and father’s car licence plates. His mother’s reads ‘Kyrie’, which is Greek for Lord, whilst his father’s says ‘Metric’.

Brown said: “At 13, I realised that both science and scripture posed plenty of contradictions. I wondered which story is true.

Yet, soon he decided: “Science and religion are partners trying to use two different languages to tell the same story. Science focuses on the answers, while religion savours the questions.”

Later, Brown answered questions posed by TV journalist Rajdeep Sardesai, and spoke of his shocked reaction at the response to the publication of The Da Vinci Code:

“I was shocked at the backlash after it was published. But it has sparked a dialogue and that is my duty as an author.” 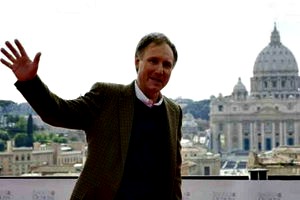 Despite the debate he has caused in some circles, Brown remains one of the most successful novelists writing today. His six novels sold over 200 million copies worldwide, and been translated into 52 languages.

Brown’s love of India is evident, both from his emotional response to being back in the country, and from his appearance earlier at the Sharjah Book Fair.

Brown added that he was impressed with the passion for literature that he has found in India so far: “There is this enormous enthusiasm and passion for knowledge, for reading.

“The level of English here is amazing. The Indian book market is expanding and this is good news for writers. The quantity of books sold here is enormous. But piracy is a big problem.”

Yet, he is not sure whether the hero of his novels, the Harvard professor of Symbology, Robert Langdon, will visit India.

When asked if he will ever plan to set a story in the country, Brown responded: “I need to know much more about the country and the customs and traditions here before I can presume to write about it.

“I also love the architecture. It is very very different from the Arab and the Western world. There is also a passion for geometry. The domes are an excellent example.”

It looks like Brown will have plenty of time to do research in India, as he is remaining in the country for a while. He will speak at the National Centre for Performing Arts in Mumbai, and another packed room is expected to receive him with eager ears.

Eleanor is an English undergraduate, who enjoys reading, writing and anything media related. Aside from journalism, she is also passionate about music and believes in the motto: “When you love what you do, you’ll never work another day in your life.”
Historical WWI Cannon in Pakistani Village
In Spite of Oceans by Huma Qureshi