Ever taken a trip to India to buy new clothes? We discover if British Indians still make these trips, as well as alternatives to travelling.

There is no denying that British Indians have heard about fast fashion.

It’s a term that remains on the tip of the tongue for a myriad of fashion-conscious buyers.

Fast fashion is also a term that is frequently directed at the South Asian community.

For example, Bangladesh has remained at the heart of fast fashion concerns in the 21st century.

According to the Borgen Project, 83% of the country’s exports are made from the clothing industry.

As a result, fast fashion has raised wider concerns for fashion sustainability in South Asia.

Sustainable fashion lies upon clothes being manufactured and consumed in an ethical and environmentally friendly way.

But asides from fast fashion, how is South Asia and particularly India raising awareness for this matter?

A trend that has been popular for British Indians has been to fly to India for new outfits.

Whether it’s the wedding of a relative or an upcoming party, the desire for new and trendy clothing is common.

However, the consequences for these fashion-driven trips can be devastating.

Despite the consequences, fashion lovers continue to make such journeys frequently.

While the Covid-19 pandemic has partially halted both travel and weddings themselves. Before this, these expeditions were common.

Despite the heightening climate crisis with unnecessary plane travel, these are concerns that are not conveyed well to older audiences.

Therefore, the older generation may not understand the evident issue with returning to their homeland specifically for clothes.

It raises the question – is journeying back to India for the sake of clothing a critical concern?

And if these journeys are still being committed to, how do they contribute to environmental problems?

DESIblitz explores the issues with these shopping trips, as well as the alternatives for British Indians today.

Why do British Indians Travel to India for Clothing? 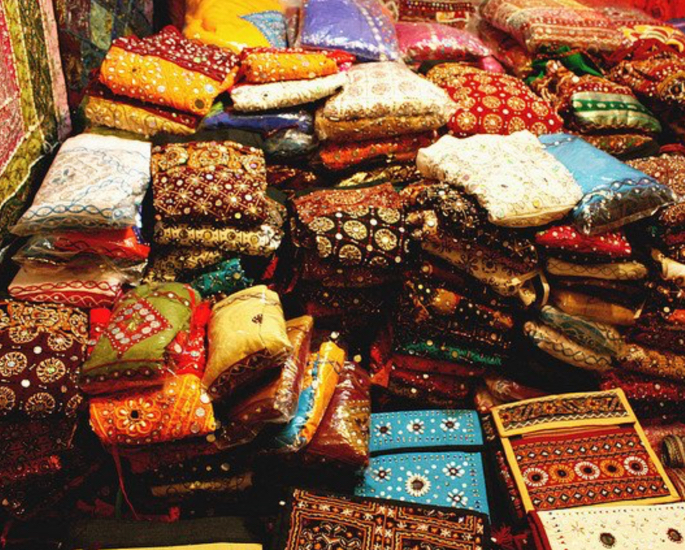 British Indians typically travel to India for clothing to access the markets they know best.

Younger British Indians may not see this appeal.

Many British Indians are born into the UK and find ease browsing for clothes in shops that they can navigate best.

But for those who have migrated, the markets of India may be of more convenience to them.

Another reason why British Indians may go to India to shop is for the variety of clothing available.

Again, younger British Indians may believe that the streets of the UK cater perfectly to the requests of Indians.

Hubs for Indian clothing are renowned for their availability in wedding-specific Desi attire.

“Ladypool Road in Sparkbrook attracts regular shoppers from as far afield as Newcastle, Oxford, Bristol and even Scotland”

There are numerous areas throughout Britain where you can find consecutive roads bursting with luxurious Indian suits, jewellery and accessories.

However, the globalisation of the British high street hasn’t always been as it is in the 2000s.

Only when the settlement of British Indians in inner-city areas became noticeable did the renovation of Britain’s high streets occur.

Before this, the diversity in clothing ranges available to British Indians was smaller.

Collections were limited by the supply arriving from India, which has only increased later down the line.

Even in post-peak immigration days, the lack of inclusivity for Indians in retail fashion continues to be recognised.

“Rising affluence and increasing mobility are drawing more Indian visitors to the UK, but the shopping experience leaves much to be desired.”

Therefore, the most diverse product ranges were and arguably still are in India.

The scope of clothing available for Indians will remain outstanding in India itself.

Furthermore, the accessibility of tailors, alterers and fashion designers in India for Indian apparel remains superior.

Whilst there is a rise of Indian designers in Britain, the numbers are unsurprisingly outweighed by those in India.

The Issue with Travelling to India to Shop 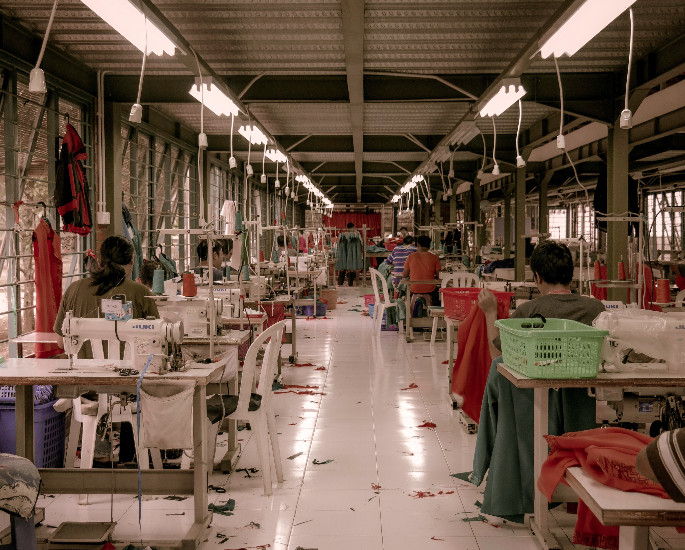 Many British Indians may not see the trouble in the shopping trend of going to India to purchase clothes.

After all, isn’t India where the cheapest and best-tailored Desi clothing can be found?

Why should we be discouraging British Indians from buying from places where they feel satisfied?

The above are all valid questions and queries regarding this matter.

As with a lot of things, such shopping habits are usually founded without regard to the consequences.

With this matter, the consequence is over-consumption, leading to a negative impact on the environment.

With the help of a carbon footprint calculator, one can see the detrimental impact that flying abroad specifically for clothes can have.

A return flight from Heathrow, England to Amritsar in India creates approximately 3.74 tonnes of CO2.

It could be argued that the environment acts as a sacrifice for individualistic needs.

With growing concerns for fast fashion in India, it is astonishing that other fashion-related environmental issues are being ignored.

The cause of the lack of attention in regards to this matter boils down to the fact that people simply aren’t aware of the damage they can cause by making such trips.

It can be increasingly difficult to communicate this concern with older British Indians due to the generational divide.

However, the steps that one takes after learning about these environmental consequences is far more important.

Therefore, what can British Indians do instead of travelling to India for new outfits?

Alternatives to Shopping in India 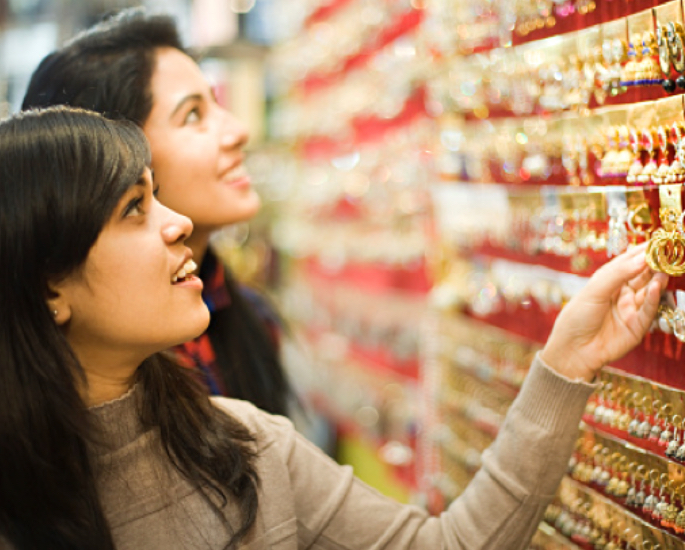 It has never been easier to seek and support UK based fashion designers.

In a multicultural country, British Asian designers and collection curators are no longer hard to find.

They often create exhibitions that you perhaps would not have access to in a shop in India.

This could take the form of a fusion of Western and Indian styles.

“Until recently, only a few UK-based designers had been celebrated for translating their Indian heritage into a new, hybrid language.”

By looking within Britain itself, British Indians can often find clothing that relates to their personal experiences.

A designer who has featured this inclusion of heritage is Priya Ahluwalia.

“The British Designer Paying Tribute to the Immigrant Experience.”

As a result, the designer has undertaken an eco-friendly initiative to make clothes.

In her conversation with The New York Times Style Magazine, she said:

“If I’m going to add more clothes to the world, I can use materials that already exist.”

Therefore, British based designers have begun tailoring a fashion experience to British Indians.

Thrift shops are also worth visiting especially if you’re looking for unique and one-of-a-kind pieces.

Clothing rental services are also becoming increasingly popular. It is only a matter of time before Desi attire is also easily available to rent.

Platforms such as Depop and Vinted are also great sources to browse and buy items at a great price.

However, the easiest way to shop for Desi attire, alongside a rare trip to India, is to shop small and locally.

In cities such as Manchester, Birmingham and Southall, Indian clothing shops are a force to be reckoned with.

An occasional trip to Indian clothing hotspots is deemed environmentally acceptable compared to a thousand-mile trip.

British Indians do, and undoubtedly will continue to, make trips to India to purchase garments.

However, by amplifying the issues with these journeys, there is hope for change.

The impact that flights have on the environment is increasingly being considered especially concerning millennials and Gen Z’s.

Sometimes, it can be hard to realise that you may be committing to unnecessary and harmful lifestyle habits.

But by recognising the issues caused, British Indians can become more educated and willing to make alterations to their shopping habits.

Aashi is a student who enjoys writing, playing the guitar and is passionate about the media. A favourite quote of hers is: "You don't have to be stressed or busy to be important"
Shweta Tiwari Flaunts her Abs in Sheer Saree
Self-made Fashion Tycoon to Debut at New York Fashion Week