A WWI British cannon has proudly adorned the village Dulmial in Pakistan since 1925. It has served as both inspiration and a reminder of the hardships of war.

"One hundred years on, it is our duty to reflect and remember the sacrifices of our forefathers. 'Lest we forget'."

A 19th century British cannon still sits at the entrance to Dulmial in Pakistan.

The cannon has adorned the right bank of a pond in the village since 1925.

Described as being ‘preserved in pristine condition’, the cannon was presented to Dulmial after 460 of its men participated in World War One.

This contribution to the war, in which nine did not return from, was the ‘largest participation of any village in Asia.’

During the war, the village located approximately a hundred miles south of Islamabad was still a part of British India. Because of this, the occupants were drafted into the war alongside Britain and its allies.

The tragic 4-year-long war claimed almost 9 million lives, including lives of those of many ‘forgotten heroes’ – Indian soldiers drafted into the war on behalf of Britain (read our DESIblitz article here). 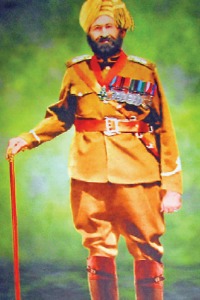 “The unified Indian Army contributed 1.3 million troops to World War 1 for the Allies, 60,000 of them gave their lives.

“The Indian Corps won 13,000 medals for gallantry, including 12 Victoria Crosses. One hundred years on, it is our duty to reflect and remember the sacrifices of our forefathers. ‘Lest we forget’.”

As a sign of gratitude of Dulmial’s service and sacrifice, the village was offered an award of their choosing.

Captain Ghulam Mohammad Malik was in charge of the choice, and turned down British offers of land, money and water facilities in favour of the cannon.

A plaque on the cannon’s podium reads: “This gun was awarded to Dulmial in recognition of services rendered by all ranks from  this village during and prior to First Great War 1914-1919.

“The gun was brought from Jhelum and placed here under the supervision of honorary Captain Malik Ghulam Mohammad and other veterans in 1925.”

The Dulmial gun is said to have been an inspiration to many of the village’s residents. The prestigious machine, as well as heroic stories from the war, is said to have inspired five lieutenant generals, 23 brigadiers and many other junior officers to the army.

Almost 90 years on, Dulmial is still known in Pakistan as ‘the village with the gun’. However, the cannon and its terrific if not heart-wrenchingly burdened history, is relatively unknown in Britain. 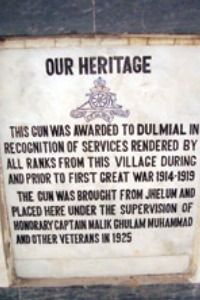 Even as a nation with steep Asian heritage, and many Asian descendants (including some from Dulmial itself), the cannon is a reminder that the ‘forgotten heroes,’ must always be remembered too.

Dr. Irfan Malik is one of such Dulmial descendants. Speaking on the village he said: “I have visited Dulmial many times over the years, and I have made it my aim to research the World War One history of the village as it played such an impressive part during the time.”

On 10th November 2014, representatives of Dulmial were invited to attend the First World War Centenary reception at the British High Commission, Islamabad, Pakistan.

The reception saw the unveiling of a plaque honouring three soldiers from modern-day Pakistan who were awarded the Victoria Cross during the First World War.

“Three soldiers of our village received Indian Order of Merit (IOM) medals for their bravery and valour shown for the British forces during various wars.”

“The IOM medal was equivalent to the Victoria Cross because this top British military medal was not awarded to Indian soldiers before 1911. Besides 460 men of our village who fought in WWI, at least 736 went to fight in WWII,” Malik added.

Malik insists that while the canon signifies pain and bloodshed of war, it is also a sign of the bravery of Dulmial’s citizens:

“This cannon installed here is our pride. If we did not have this gun for our martial services, our village would have been like all others. Our village sent the highest number of soldiers in WWI from Asia and we are proud of our history.”

The UK Government has been commemorating the Centenary of the War by visiting the 11 countries involved in helping Britain win the war.

Zak is an English Language and Journalism graduate with a passion for writing. He is an avid gamer, football fan and music critic. His life motto is “Out of many, one people.”
National Theatre presents Behind The Beautiful Forevers
Dan Brown overwhelmed by India visit