The first major DLC of Battlefield 1 will release in late March 2017. DESIblitz breaks down what to expect with the game’s introduction to the French Army.

"I can’t go into detail, but we have something up our sleeves."

In 2016, the Battlefield franchise made an explosive return to form with a return to the past.

In place of the present, Battlefield 1 took gamers into the trenches of the First World War. Now, the game’s first major expansion is set for release.

They Shall Not Pass, out now for Battlefield Premium members, will be available worldwide on March 28th, 2017. It seeks to plug a major gap in the Battlefield 1 experience.

The title of the expansion speaks to its central preoccupations. ‘They Shall Not Pass’ became a famous war-cry of the conflict for the French Army. This army and the French theatre, in general, was noticeably absent from the main game.

They Shall Not Pass fixes this in focusing on one of the most famous Western European theatres of all: Verdun. The expansion’s maps and two new operations all take place in this famous battle.

Verdun Heights, in particular, depicts a hellish rendition of the conflict. Forest fires rage in the background as players fight it out in the mud.

Battlefield 1~ They Shall Not Pass 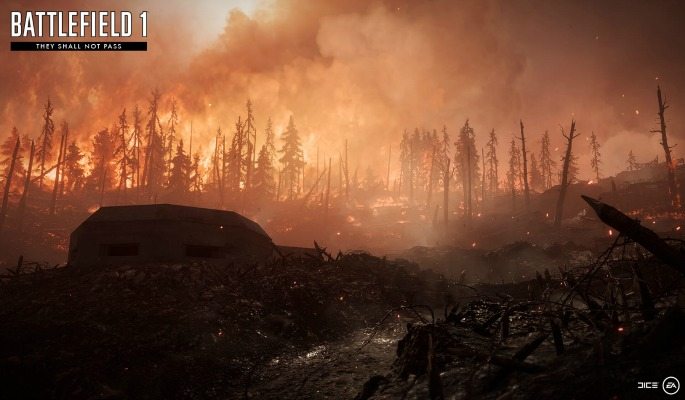 Keeping to the French theme, the expansion introduces the French Army to the game. To accompany them are a number of French weapons and vehicles from the period.

Highlights include the new Saint-Chamond assault tank and also the Siege Howitzer. The latter is effectively a personal mortar that players can deploy to devastating effect.

Elsewhere, They Shall Not Pass sees a few additions that seek to rebalance the Battlefield 1 experience. Most obviously this is seen in The Devil’s Anvil operation. The maps featured in this operation all have no vehicles.

If you’ve found yourself being frustrated by vehicle-on-vehicle-on-infantry carnage, these maps are just for you.

The expansion also features a new game mode called Frontlines. In Frontlines, both teams compete for one flag, and where the loss of a base requires attacking communication devices to recover.

With the same 32-player count as other game modes, Frontlines offers a manic gameplay experience. It once again emphasises infantry-on-infantry action over vehicle mayhem.

Featuring a theatre, an army left out of the base game, and with gameplay insertions, that offer alternative avenues for players, They Shall Not Pass looks set to be a worthy addition to the game.

However, one problem with the expansion involves, splitting the player base into those owning it, and those not.

Yet, DICE Art Director Johannes Fors has recently said that:

“I can’t go into detail, but we have something up our sleeves. We are listening to the community and we know they’re concerned, so that’s why we addressed this issue. There will be something announced soon.”

He also added to stay tuned for future announcements.

Only time will explain this solution!

But, for those that are not Premium members, they will have to wait until March 28th, to dive back into the trenches for this reinvigorated Battlefield 1 DLC.

Images Courtesy Of: Electronic Arts and Official Website of Battlefield 1.