Bollywood celebrities have voiced their anger about the controversial Bois Locker Room chat which boasted about rape and demeaning women.

Bollywood stars have condemned the controversial Bois Locker Room, a chat room consisting of a group of Delhi boys on Instagram which sent social media into an uproar.

The schoolboys discussed raping their classmates and as a result, were arrested by the cybercrime cell of the Delhi Police.

This was the second arrest made by the police. According to investigators, the group had 22 members in total including two adults who were studying in colleges.

During the chat, the boys candidly spoke about gang-raping a classmate as well as commenting on several photos of schoolgirls which we accompanied with texts objectifying them.

The conversations were exposed when one of the boys in the group took screenshots and passed it on to someone else.

It was then posted on social media by one of the girls who was targeted by the boys. An investigator revealed:

“Once the screenshots emerged in the public domain, the group was deleted and another one created.

“Some girls were added in the new group to mislead police.”

Now, Bollywood stars have been taking to social media to voice their anger and frustration over the Bois Locker Room chat.

Actress Amyra Dastur raised her voiced against the content of the conversation. She said:

“I understand the need to look cool when you’re young. I believe we do say really stupid thing when we’re growing up but there’s a line and it scares me that they’ve crossed it.

“Rape is not a joke. And it’s this mentality that gives birth to criminals.

“People say sex education should be provided in schools but more than that, boys should be spoken to about domestic abuse, molestation and rape.

“They should be made to meet female victims and survivors and hear their stories. One has to emphasise with the situation to change a mindset.”

“This reeks of entitlement and gross negligence on their parents part.”

“The parents are to be blamed for raising sons who don’t respect human beings and spoiling them. And boys you should be ashamed.” 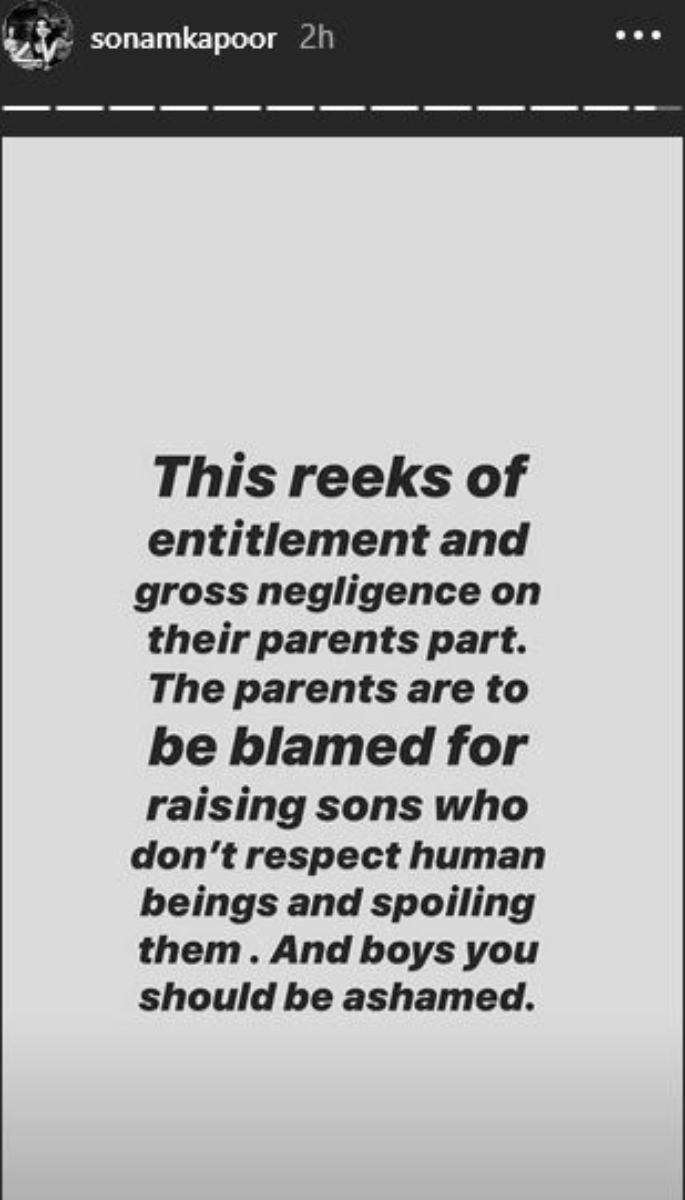 Mira shared journalist Rega Jha’s essay on Instagram. She shared the excerpt which highlighted what boys in India should be taught by their parents at a young age.

They should be taught accordingly, so they do not negatively view women.

This includes teaching them about “consent”, “respect”, “gender equality” and the fact that they “aren’t entitled to any woman’s body, attention or time.”

“Parent & teachers must address this with those Kids .. Not enough to ‘hang rapists’ .. we must attack the mentality that creates rapists!”

#boyslockerroom a telling tale of how toxic masculinity starts young! Underage boys gleefully planning how to rape & gangrape minor girls. Parents & teachers must address this with those Kids.. Not enough to ‘hang rapists’ .. we must attack the mentality that creates rapists! https://t.co/Jw4cFQ9gXM

Meanwhile, the administrator of the Bois Locker Room has been arrested. The investigation continues.

Ayesha is an English graduate with an aesthetic eye. Her fascination lies in sports, fashion and beauty. Also, she does not shy away from controversial subjects. Her motto is: “no two days are the same, that is what makes life worth living.”
10 Best Upcoming Pakistani Web Series that are a Must Watch
Sherlyn Chopra recalls Bollywood Casting Couch ‘invites’