Bollywood Filmmaker Karan Johar stuns everyone after revealing the news that he is now the dad of twins after undergoing surrogacy.

Bollywood stars such as Priyanka Chopra, Alia Bhatt and Sidharth Malhotra have been quick to congratulate the proud father of a boy and a girl named Roohi and Yash.

Fellow director and close friend of Karan, Farah Khan, even offers to be their nanny.

Karan Johar shared his baby news on Twitter with a statement that started with: “I am ecstatic to share with you all the two most wonderful additions to my life, my children and lifelines; Roohi and Yash.

“I feel enormously blessed to be the parent of these pieces of my heart who are welcomed into this world with the help from the marvels of medical science.” 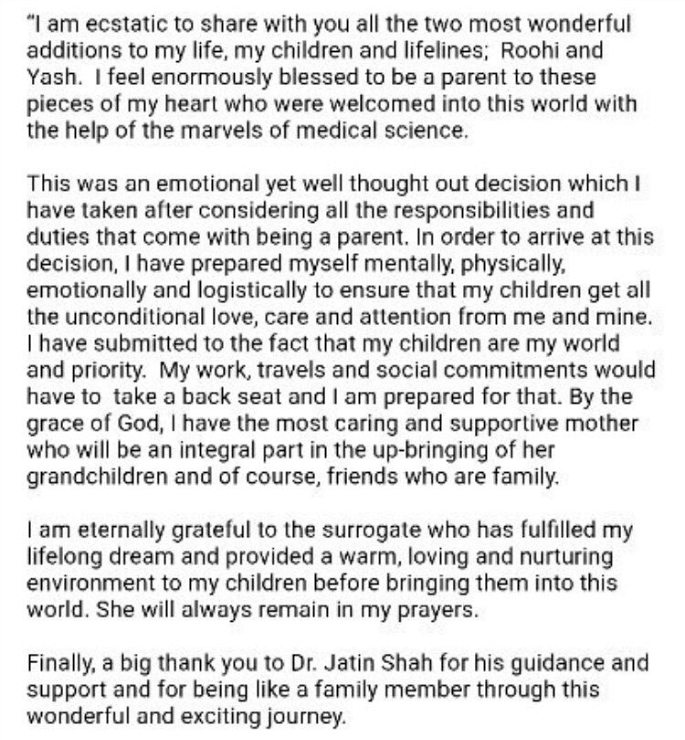 Karan continues to say how he has prepared himself “mentally, physically, emotionally and logistically” to ensure his children “get all the unconditional love, care and attention”.

He explains how work and social commitments have taken a back seat as his children are his priority. He also thanks his “most caring and supportive mother” who will have a huge part in raising her grandchildren.

Karan thanks his doctor and surrogate for fulfilling his “lifelong dream” to be a parent. He adds he is “eternally grateful”.

Bollywood stars took to Twitter to congratulate Karan Johar on his news: 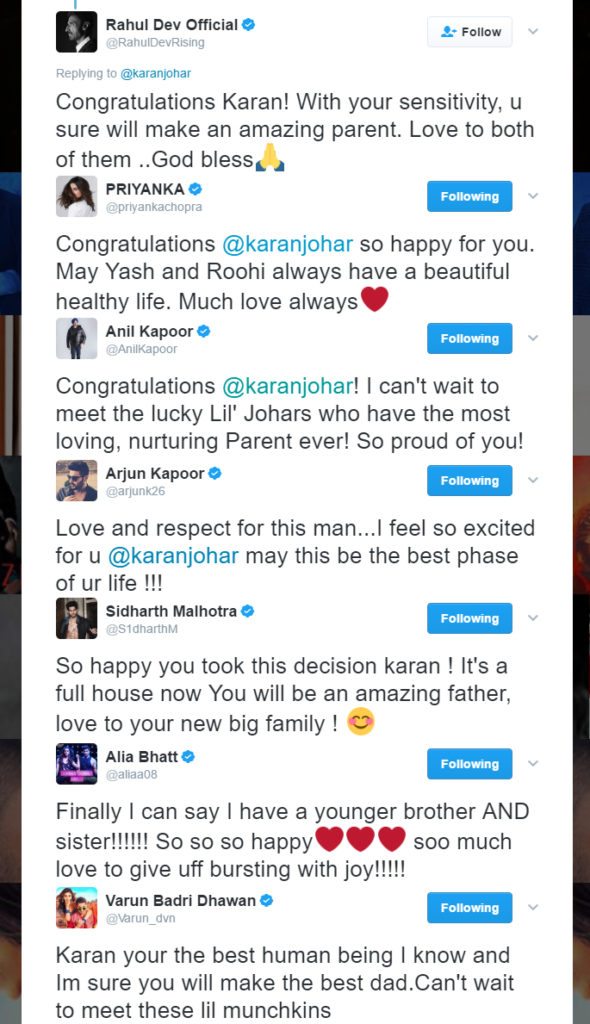 Other Bollywood celebrities have shown their support to Karan, including Parineeti Chopra who says: “This is soooo amazing!! I am soooo happy for you Karan you are going to be an amazingg dad!!!”

Director, actress and mother of triplets Farah Khan says: “Glad you took my advice seriously @karanjohar Best thing to happen to you.. n theyll b the youngest people you hang out with so all’s good.”

As a close friend of Karan, Farah Khan tells press at Mijwan Summer 2017 how she hoped Karan would become a parent. She says:

“When we went to Sajid’s show, they asked me, ‘What do you want for Karan?’ and I said, he should be a parent, either by adopting or surrogacy.

“I am thrilled and I think it is the best thing to happen to him. I told him, if he wants a nanny, then main hoon na.”

Actress and model Jacqueline Fernandez says: “Incredibly happy for you @karanjohar ‘Dad of the Year’ headlines are spot on. Much love.”

News has even reached the west as Hollywood showbiz reporter, Perez Hilton, tweets: “Congratulations!! Keep doing you and spreading light!”

We cannot wait to see the first pictures of the adorable twins Roohi and Yash. We wish Karan Johar the best of luck with his new family.