Former Pakistani cricketer, Wasim Akram and his wife Shaniera have announced that they are expecting their first baby together. The beautiful couple shared the wonderful news on social media as they were congratulated by celebrities and fans worldwide.

“Wasim & I couldn’t be happier sharing our wonderful news. Thank you for all your wishes.”

Former Pakistani cricketer and Kolkata Knight Riders bowling coach, Wasim Akram and his proud Aussie wife, Shaniera have announced that they are expecting there first child.

Wasim is to become father for the third time, whilst Shaniera Akram will soon enjoy motherhood for the first time.

The joyous news was welcomed by all loved ones and comes just after the couple celebrated there first wedding anniversary on 12 August 2014.

Despite they’re wedding being a private affair the pair took to twitter to announce the news. Wasim was first to tweet the news on social media site twitter, saying: 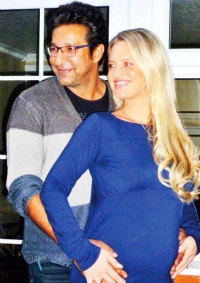 “I am thrilled to announce that @iamShaniera and I are expecting our first child together. Thank you for your wishes & prayers #babyontheway.”

Shaniera soon followed suit expressing her joy as she received messages of love from fans globally.

It was not long until #babyontheway was trending along the twitter waves. Revealing her happiness, Shaniera tweeted:

“Wasim & I couldn’t be happier sharing our wonderful news. Thank you for all your wishes #babyontheway.”

“Our boys, family and friends are very excited and we look forward to a happy healthy arrival early next year InshAllah.”

British journalist and television host, Piers Morgan was first amongst many celebrity friends to congratulate the couple, tweeting: “Fantastic news! Congrats to you both.”

Wasim Akram who is often remembered for bowling two unplayable deliveries during Pakistan’s Cricket World Cup 1992 triumph was also congratulated by many of his die hard fans.

Upon hearing the news, a fan named Tausi Malik tweeted: 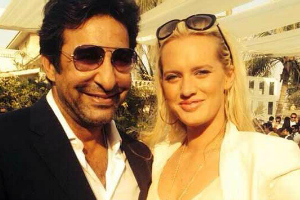 “WOW congratulations..A beautiful child with the best of genes from both sides is on its way @wasimakramlive @iamShaniera.”

Wasim aka the ‘Sultan of Swing’ shared the news during the couples stay in England.

Wasim was in the country on official duty as he was part of the Sky/Star Sports commentary team for India’s tour of England.

The gorgeous couple last made a public appearance at Azhar Mahmood’s benefit dinner for crickets legends on 20 August 2014. The couple were pictured holding hands together, showing a lot of affection towards each other.

The couples relationship took off in a whirlwind romance in Dubai after meeting in Melbourne in 2011. Shaniera, who is Australian, converted to Islam before they tied the knot in Lahore, Pakistan in 2013.

They have been viewed as one of the most happiest couples since their romance took off. 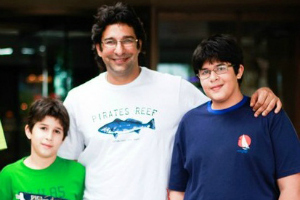 The baby will be a wonderful addition to Wasim Akram’s family.

Shaniera has become very close to Wasim’s two sons, Taimur and Akbar, since the passing of his late wife Huma Akram. Huma sadly passed away in 2009 due to multiple organ failure.

Friends of the couple have mentioned the great strength that Shaniera has delivered to Wasim:

“Right now Wasim and Shaniera are ecstatic about the fact that they will be having a baby. Shaniera is over the moon. For the couple it doesn’t matter what gender the baby is, as long as it’s a healthy one.”

It seems like it is baby season at the moment. The news preceded another high profile pregnancy, as the Duke and Duchess of Cambridge announced their second baby on the way just a week later.

DESIblitz wishes both couples all the very best for the coming months. The new arrivals will no doubt bring a smile to the faces of all there adoring fans.

Theo is a History graduate with a passion for sport. He plays football, golf, tennis, is a keen cyclist and loves to write about his favourite sports. His motto: “Do it with passion or not at all.”
FA Sexism exposed by Rani Abraham
Saeed Ajmal Suspended from Bowling for Pakistan