Pakistan cricket legend Wasim Akram has married his fiancé Shaniera Thompson on August 12, 2013. The Sultan of Swing married his long-time girlfriend in a simple ceremony in Lahore.

"Receiving a beautiful welcome here in Pakistan. It's good to be home."

It is a new beginning for Pakistan cricket legend Wasim Akram and his newly wedded wife, Shaniera Thompson, as they were officially married in a private ceremony on August 12, 2013.

Akram finally announced their marriage to the world a full week later, saying: “I married Shaniera in Lahore last week in a simple ceremony and this is the start of a new life for me, my wife and for my kids.”

Shaniera also commented on her Facebook page by writing the following: 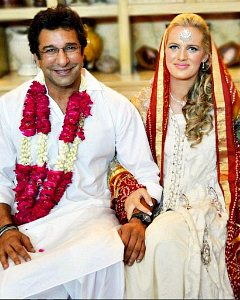 “Wasim and I were married in a small and private ceremony in Pakistan early last week. As Pakistani wedding tradition follows, a small and private ‘Nikkah’ was held, which is the start of the wedding ceremony, [and] the signing of the certificate. Now to start planning the Wedding proceeding…!”

The Nikkah ceremony signifies the matrimonial contract between the bride and groom in the Islamic faith.

Earlier in August, Thompson travelled to Karachi then Lahore to meet Akram’s father who is unwell. He wanted to see his son married again and this is where the marriage ceremony was held.

It was attended by close relatives only. But, the couple not only wanted the blessing of their family but also of the people of Pakistan:

“I sincerely hope the people of Pakistan and our friends and supporters across the globe will give us their blessing and support.”

Thompson took to Twitter to thank everyone for their best wishes and also asked her followers to pray for her father in law. 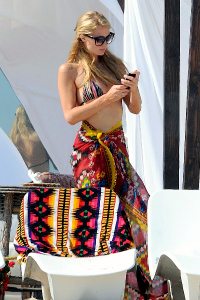 The 30-year-old tweeted: “Happiest day today. Me and Was in relation now. Everyone please pray for me and Waz, and also pray for my FATHER IN LAW, He is not well.”

“To all my followers, Please Pray for WASIM Father Health. He is not felling well. Thanks for all the message and prayers.”

Shaniera also tweeted out a picture of her and her husband both adorned in white and red clothing along with big smiles clearly showing their joy.

She looked stunning in the traditional wear and we’re sure that Wasim was ecstatic to be finally married again.

This is Wasim’s second marriage following the tragic death of his first wife, Huma in 2009, following multiple organ failure. They had two children together.

Wasim has often commented on how much love and adoration he had for his former wife, Huma and that he always felt he would never marry or find love again.

But on the contrary he did find love and married Shaneira, who initially helped him through his loss, before their friendship officially became romantic. 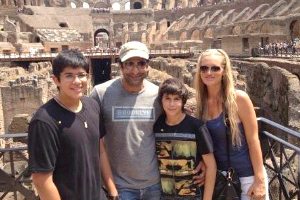 To get to this stage it has not been an easy ride for the new couple though. The famed cricketer was criticised for staying with his fiancé under the same roof without being married to her.

Wasim finally made the decision to marry Shaniera, proposing to her in July 2013, and wasted no time in tying the knot.

It has also been reported that Akram’s bride has embraced Islam and is learning the sweet language of Urdu.

This surely shows how much she loves her husband and her new family. Wasim also commented on her relationship with his sons from his previous marriage:

“She has embraced Islam and is learning our language. She has been close to my sons and they form a very good bond.” 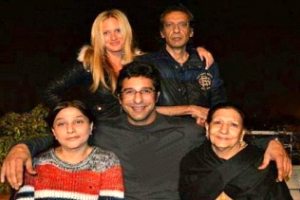 He also went onto the say that his new wife is eager to settle down in Pakistan. Well, why shouldn’t she be? She expressed her happiness when she tweeted:

With support from people she loves it is clear that she doesn’t feel far from home and is in a place where she belongs.

It remains to be seen if Shaniera will accompany Akram on his media assignments around the world as he works as a cricket commentator/expert for ESPN.

For now it must be a relief for both of them to be finally married and start a new chapter of their life together. All of us here at DESIblitz wish the couple a happy and prosperous future.