The International Cricket Council (ICC) has suspended Pakistan off-spinner, Saeed Ajmal for a year due to an illegal bowling action. With Ajmal set to miss the 2015 Cricket World Cup in Australia and New Zealand, this is a huge blow to Pakistan cricket.

"They are yet to consider my medical reports. Once they do it, I’m sure there shouldn’t be any problem.”

With a few months to go before the 2015 Cricket World Cup, the International Cricket Council (ICC) has banned Pakistan off-spinner Saeed Ajmal for an illegal bowling action.

Saeed Ajmal has been ranked the No.1 bowler in One Day International (ODI) cricket since November 2011. In T20 cricket, no one has taken more wickets than Ajmal.

He is also the leading international wicket taker since 2011, having taken a whopping 320 wickets in all formats of the game.

But now the Doosra Specialist is suspended from bowling because the ICC has declared all of Ajmal’s deliveries including the Doosra as illegal.

The world of cricket instantly reacted to Ajmal’s suspension. Kevin Pietersen tweeted: “Wow Ajmal banned. Never nice to see fellow professionals going through a tough time. Hopefully he is going to be back soon.” 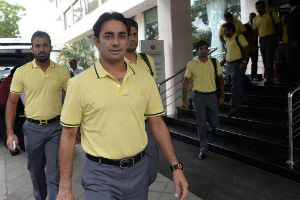 Former Pakistan Coach, Dav Whatmore said: “Sad to hear of Ajmal’s ban. I can possibly understand the doosra, but off-breaks. I hope he can correct his action for the 2015 Cricket World Cup.”

Ajmal’s compatriot and inventor of the Doosra, Saqlain Mushtaq tweeted saying: “I will help and support Saeed Ajmal to the best of my ability if required.”

Ajmal has also found support from the Pakistan Cricket Board (PCB). The PCB had originally decided to appeal the ICC ban, but are now mulling all options.

The disadvantage of challenging the suspension is if the bowling review group also finds his action illegal, Ajmal could then receive a time-bound ban within which he would not be allowed to appeal.

The Faisalabad cricketer remained optimistic about the ban as he said:

“They are yet to consider my medical reports. Once they do it, I’m sure there shouldn’t be any problem. If one has a medical problem what can he do.” 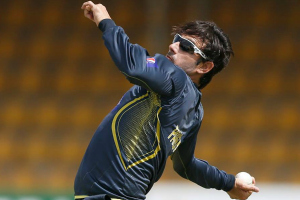 “Even earlier it was more than 15 degrees only because my arm has a natural bend. I am 100% positive and looking forward for the best and by the grace of Allah I will be in the World Cup XI.”

Ajmal was recently reported in the test against Sri Lanka in Galle. The decision to ban him was taken after a ICC accredited team of Biomechanics tested his action at the National Cricket Centre in Brisbane, Australia.

Even former Sri Lankan spinner, Muttiah Muralitharan went through this process, but his action was found to be within the laws at the time.

The interesting fact here is that Ajmal was once tested before in 2009 and subsequently cleared after testing. However this time the ICC appears to have adopted a much tougher policy.

But one may question why the ICC has taken this stance after so long. With a few months to go until the World Cup, many former cricketers like Shoaib Akhtar and Dean Jones feel the timing is a little odd. 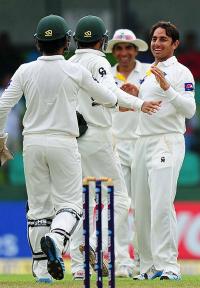 During the last ten months alone, two players have been banned from bowling and additional three have been reported and could be banned.

If Ajmal’s ban remains intact, his absence will hurt Pakistan’s chances at the 2015 Cricket World Cup. It will certainly not help Pakistan’s cause, losing they’re No. 1 bowler.

And if Ajmal was to return back, it is the stigma attached to throwing, which will affect his bowling going forward. He will always be seen or regarded as a cheat, something, which Muralitharan was always accused of, especially by Bishan Singh Bedi.

There is no doubt that if a player deliberately throws the ball it is a form of cheating. But then what is the difference between throwing the ball and a batsman not walking off knowingly that he has nicked the ball to the wicket keeper?

With new technology and methods it is easier to detect an illegal bowling action nowadays. If some Biomechanics continue to believe the Doosra exceeds 15 degrees, the ICC might be forced to ban all players from bowling this particular delivery.

The neutrals will hope that the Doosra is not banned for life. It is a wonderful delivery, which bamboozles the best of all batsmen.

The question here is will the ICC exceed the limit to 20 degrees just to accommodate the Doosra?

In the past bowlers were given the benefit of doubt, but it seems now the ICC are on a purge in relation to this matter.

Respective boards have also taken initiatives to combat this problem early on. The PCB had already formulated a five-man committee to assess their junior development.

Even if Ajmal works on his action, Pakistan will already be contemplating potential replacements such as the talented slow left-arm orthodox bowler Raza Hasan.

What ever happens in the future one thing for sure is that Pakistan has for the moment lost its most prized cricketing asset, Saeed Ajmal the magician.