The Champions League Twenty20 cricket tournament will take place in India during September-October 2014. Twelve teams featuring superstars from around the globe will be vying for the winners trophy and a prize of Six million US Dollars.

“I’m behind you 100% Mumbai Indians. Hope you excel and play the best cricket ever."

Star players from around the world will be ready to showcase their power in what promises to be an exciting and adrenalin packed tournament.

In its sixth edition, the tournament will include twelve of the best T20 teams from around the world. 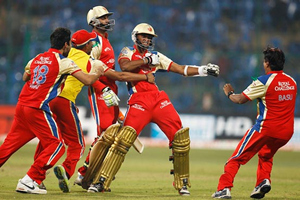 The tournament will be beamed all round the world with a total of twenty-nine matches. The winners will collect a staggering $6 million US dollars in prize money.

Since 2012 no team from England has taken part in the Champions League due to dates clashing with the English County season.

In 2014, the Lahore Lions team from Pakistan will make their debut in the tournament. Lions participation in the tournament was uncertain, but the team have now arrived in India after visas were finally issued to their players.

Mohammed Hafeez who will lead the Lions was happy at his team’s inclusion. He said:

“Both India and Pakistan love cricket and we are hoping to have a very good time there. We are going there with a message of love and I know how much they love Pakistan and its cricketers. Our aim is not only to play good cricket but also to play well off the field.” 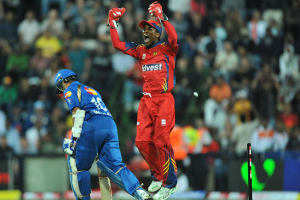 The Lions will be hoping to fair better than the previous two teams from Pakistan who participated in the tournament. Both Faisalabad Wolves (2013) and Sialkot Stallions (2012) failed to progress beyond the qualifying round.

Twelve teams have qualified for the tournament, eight of which have gained automatic place in the group stages. Four remaining teams will play each other in a round-robin tournament, with the top two progressing to the stage groups.

Two groups of five teams will contest the group stages. The top two teams of each group will then advance to the semi-finals, with the winners of Group A playing the runners-up of Group B and vice versa.

If the scores are level at the end of each game, a Super Over will be played to determine who wins the match.

All twelve teams feature some of the most formidable T20 players. Teams and key players include:-

Defending champions, Mumbai Indians will be aiming for a hat-trick of tournament wins.

Mumbai Indians are competing in the qualifiers and will have to fight it out with Northern Districts, Lahore Lions and Southern Express T20 to go through to the group stages.

Confidence is high in their camp as rejuvenated spinner Pragyan Ojha was quoted on the Champions League website saying:

“I think we have a great side. This is one team where I felt that everyone is backing each other which are one of our biggest strengths. And the other one is, everybody who is playing in the team really wants to win.”

Having faith in the Mumbai team, Anj Chauhan a fan from England tweeted:

“I’m behind you 100% Mumbai Indians. Hope you excel and play the best cricket ever #OnTheMission #havefaith #youarethebestteam.”

Dwayne Smith of Mumbai Indians will want to be top scorer again, aiming to surpass his 223 runs in 2013.

IPL champions, Kolkata Knight Riders will be depending on premier bowler, Sunil Narine who took eleven wickets in 2013.