Fashionista Sonam Kapoor has been casting spells with her enticing across the world. This time she took her expertise to the Paris Fashion Week 2020.

The actress has always provided major fashion inspiration ever since her Bollywood debut in 2007 with the film, Saawariya.

Fashionista Sonam Kapoor has never shied away from experimenting with her silhouettes while her sister stylist Rhea Kapoor also lends a helping hand.

Once again Sonam left everyone in awe of her fashion looks at the 2020 Paris Fashion Week in an array of stunning ensembles. 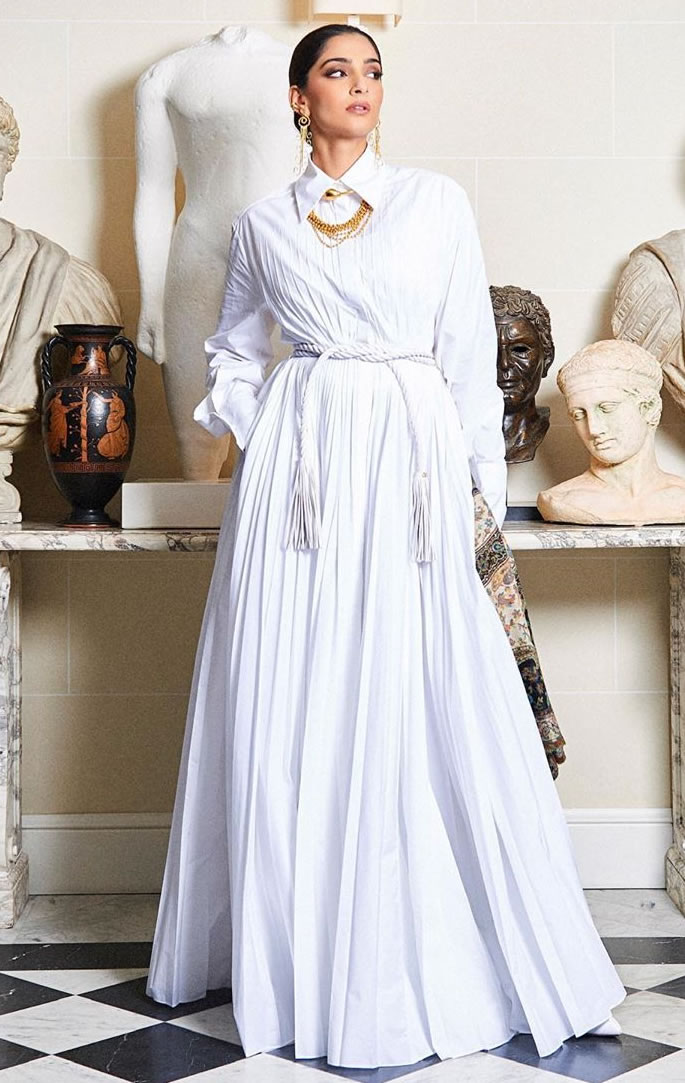 The actress was dressed by her trusted stylist and sister Rhea Kapoor. This powerful ensemble was teamed with a rope-style belt which added structure to the dress.

Sonam accessorised the look with a stunning gold layered necklace and droplet earrings from Amrapali Jewels. 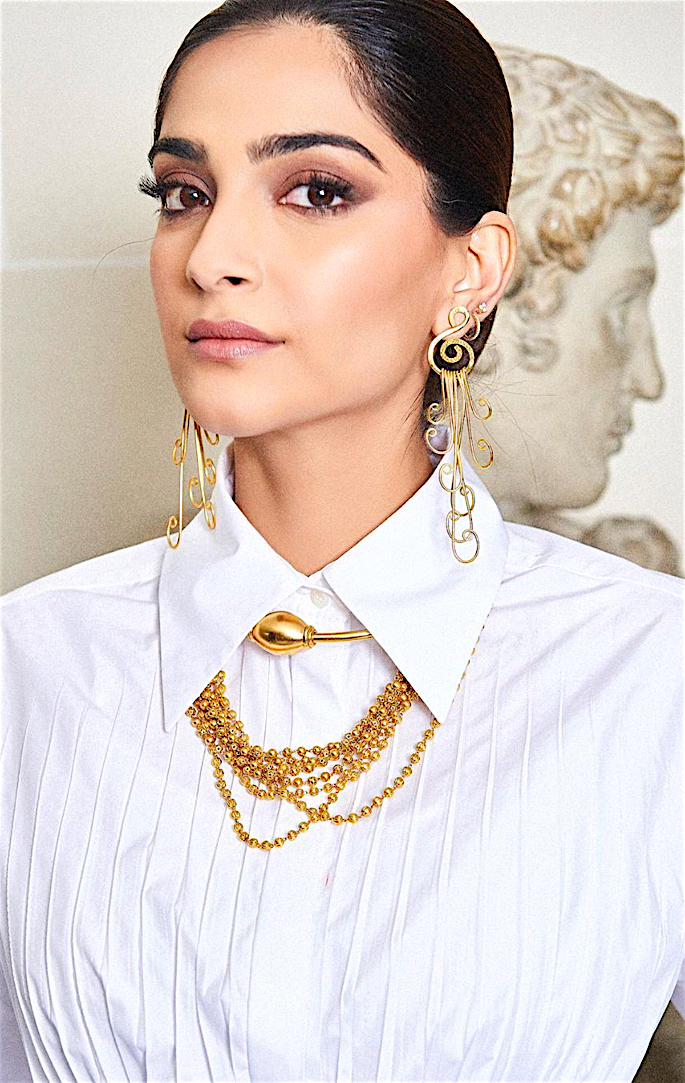 For her makeup, Sonam opted for brown smoky eyes, a nude lip and contoured cheekbones.

To complete the glamorous look, the 34-year-old styled her luscious hair into a sleek low bun.

There is no doubt Sonam Kapoor looked angelic in this striking white and gold ensemble. 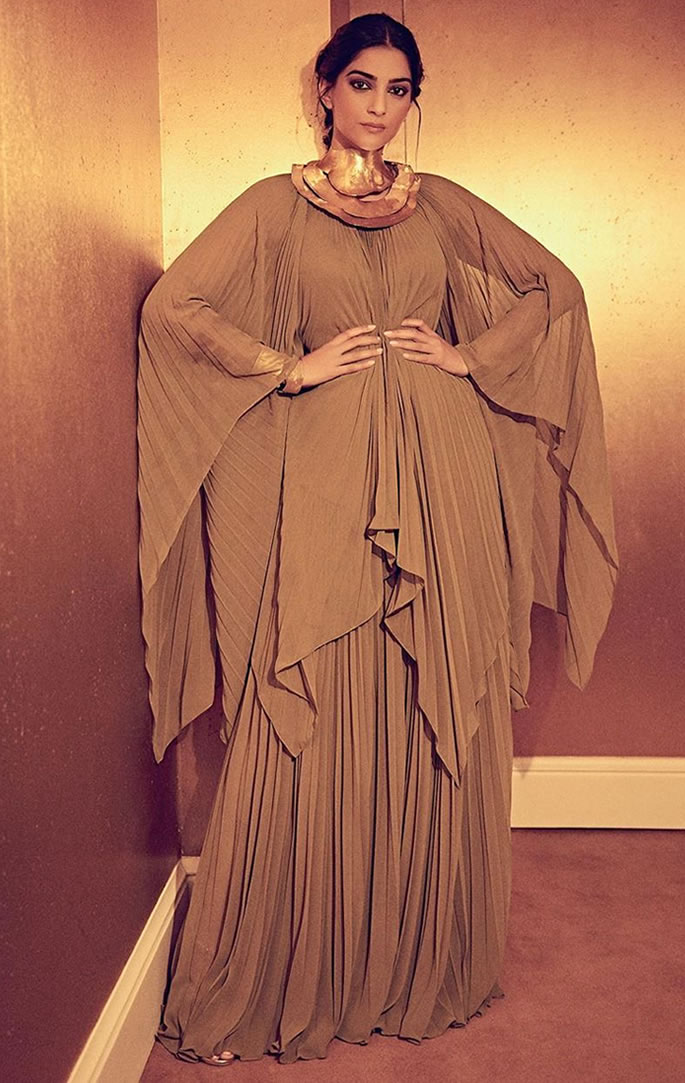 For the Elie Saab Couture show, Sonam donned a magnificent creation by the man himself.

The pleated gown struck a chord with fans showcasing her edgy style. The cape-like top enhanced the drama of the ensemble. 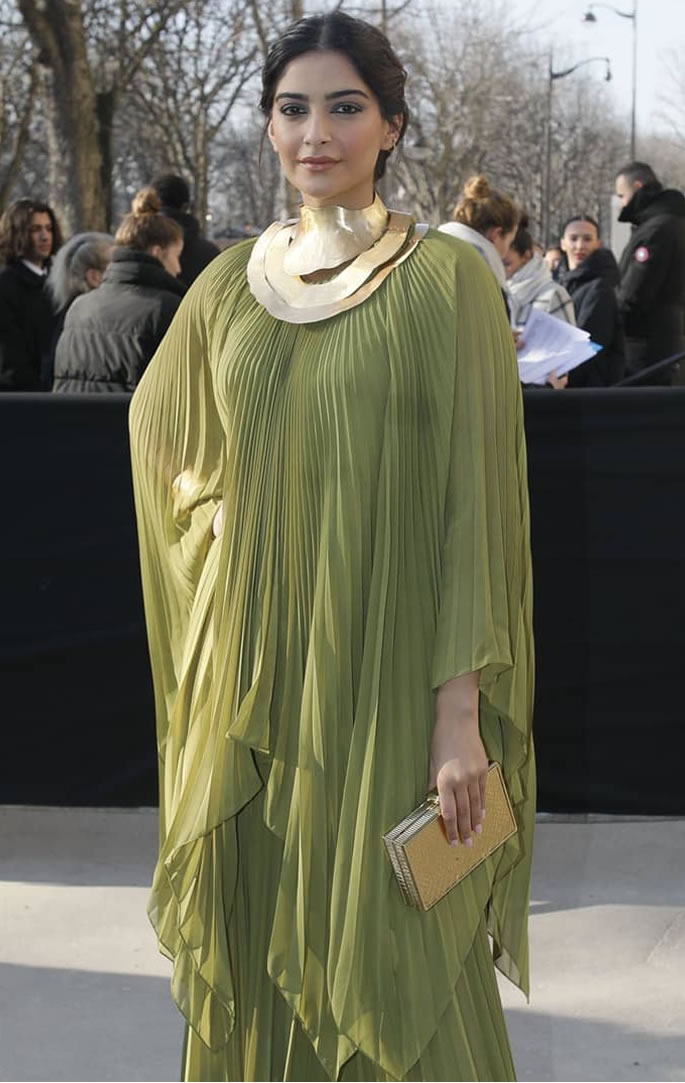 Yet is was the striking neckpiece and cuff that heightened the beauty of her look. The extravagant jewellery was from the first-ever collaboration of Rhea Kapoor and Pipa Bella. 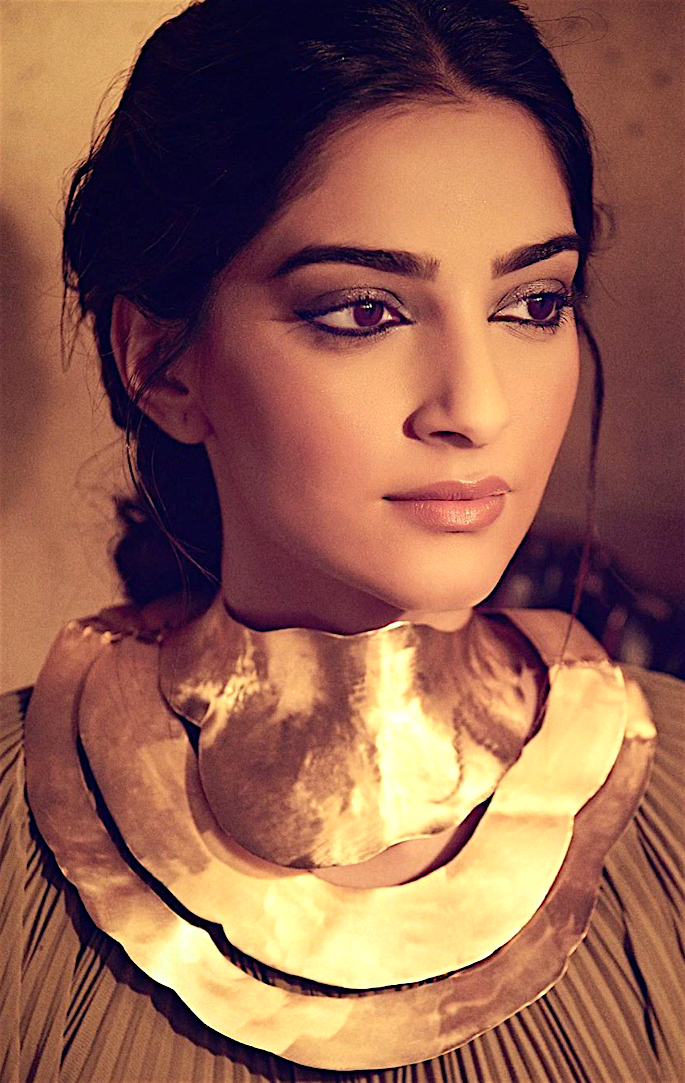 Sonam Kapoor finished off her look with a messy braid and Cleopatra style eyeliner with a nude lip perfectly complement her lavish gown. 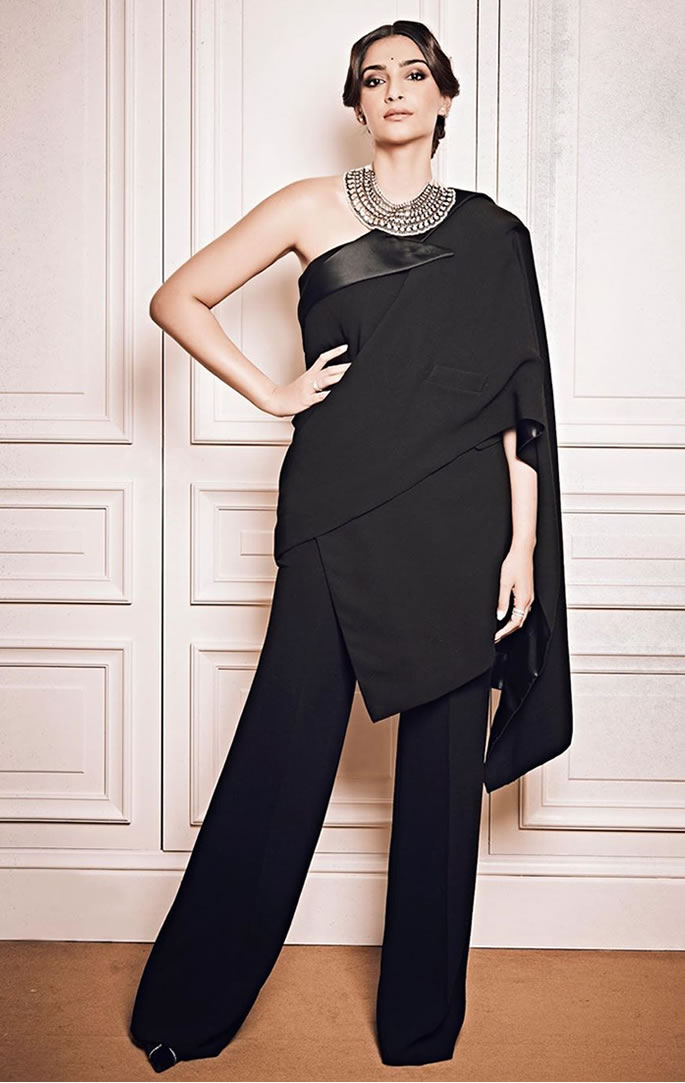 It does not stop here with the array of lush look. Sonam Kapoor took it up a notch for the Jean Paul Gaultier’s show.

“He dressed me for my first international Red Carpet in Cannes and will forever hold a special place in my heart. Fifty years of incredible craftsmanship and Haute Couture.” 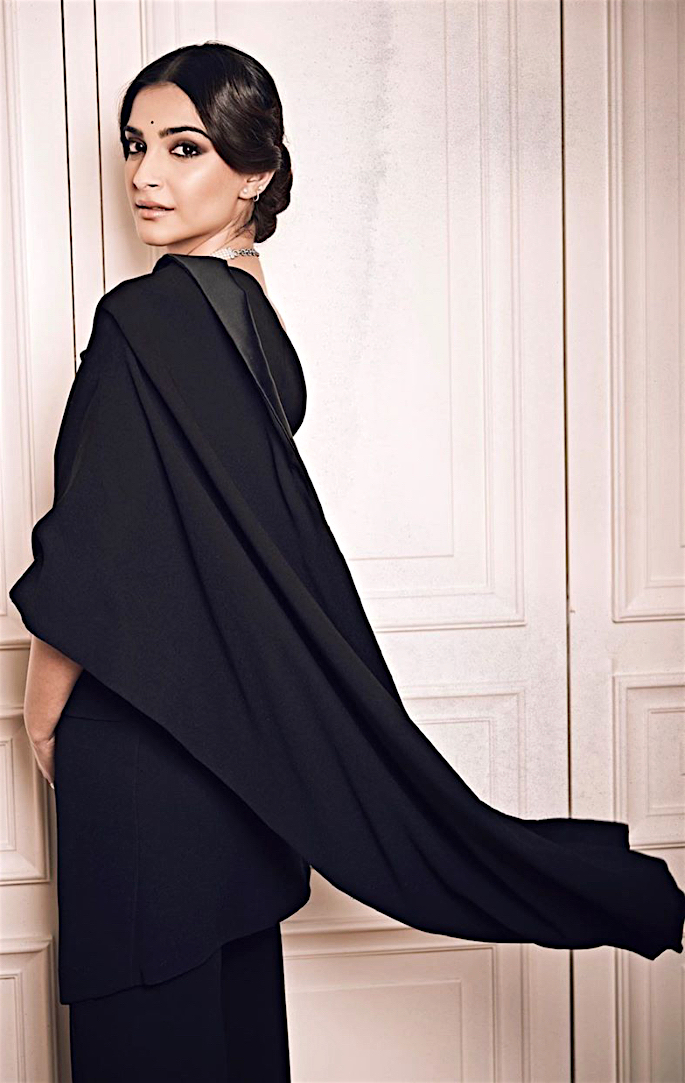 Donning a creation from the designer himself, Sonam took our breath away with a rendition of the tuxedo.

For the event, the actress wore this unique ensemble featuring a wrap-style tuxedo alluding to a saree. This was teamed with wide-leg trousers and a floor-length coat. 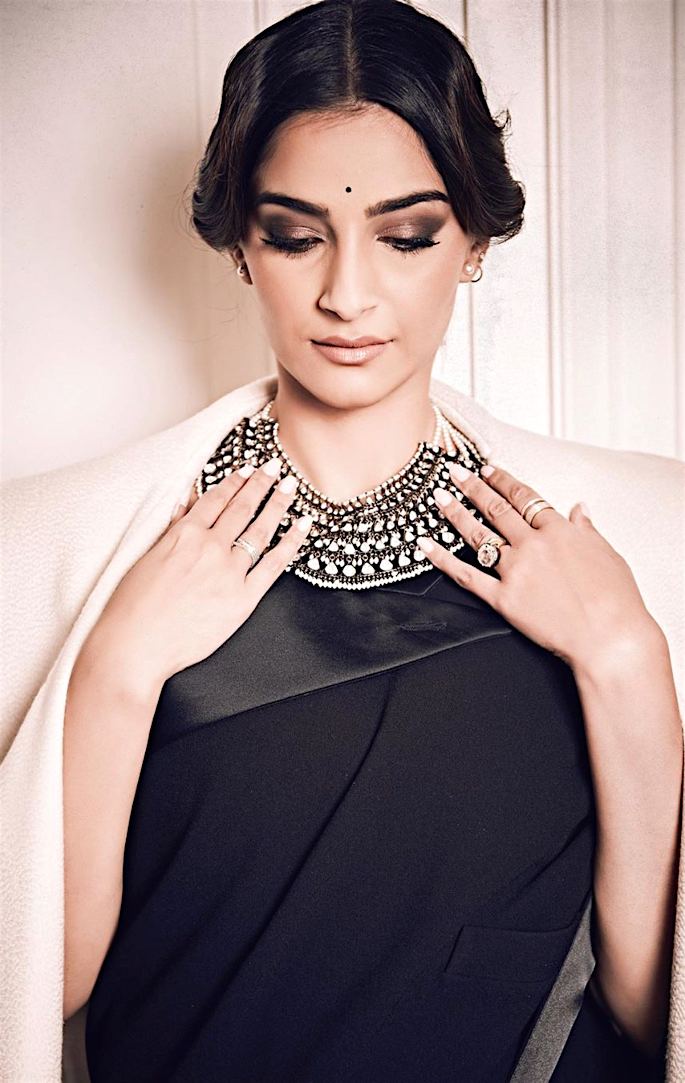 Her look was styled with a silver statement necklace by Amrapali Jewels.

For her hair and makeup, the star opted for an elegant low bun, heavily lined eyes and a nude lip. 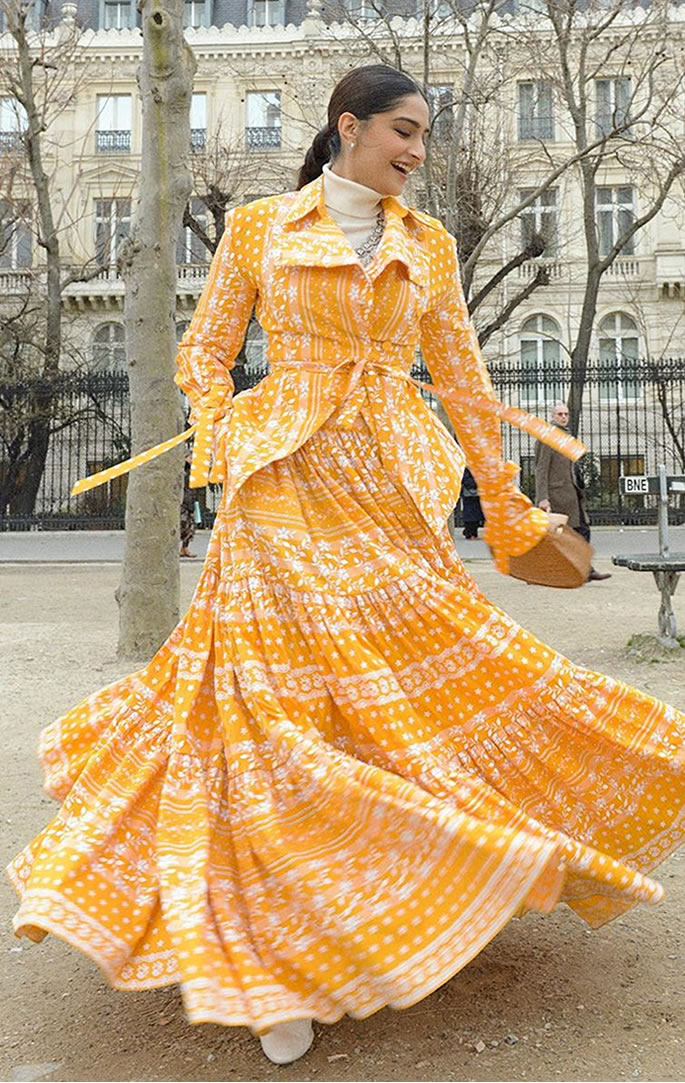 Sonam Kapoor certainly brightened up the day in this bewitching ensemble by Erdem.

It seems this trending hue has caught the attention of Bollywood’s divas like Sonam Kapoor who donned this look with a smile.

The outfit featured a jacket, skirt and white turtle neck. The jacket and skirt included floral motifs throughout evoking a summery vibe.

Sonam paired the attire with white heeled boots complement the hue in the clothes. 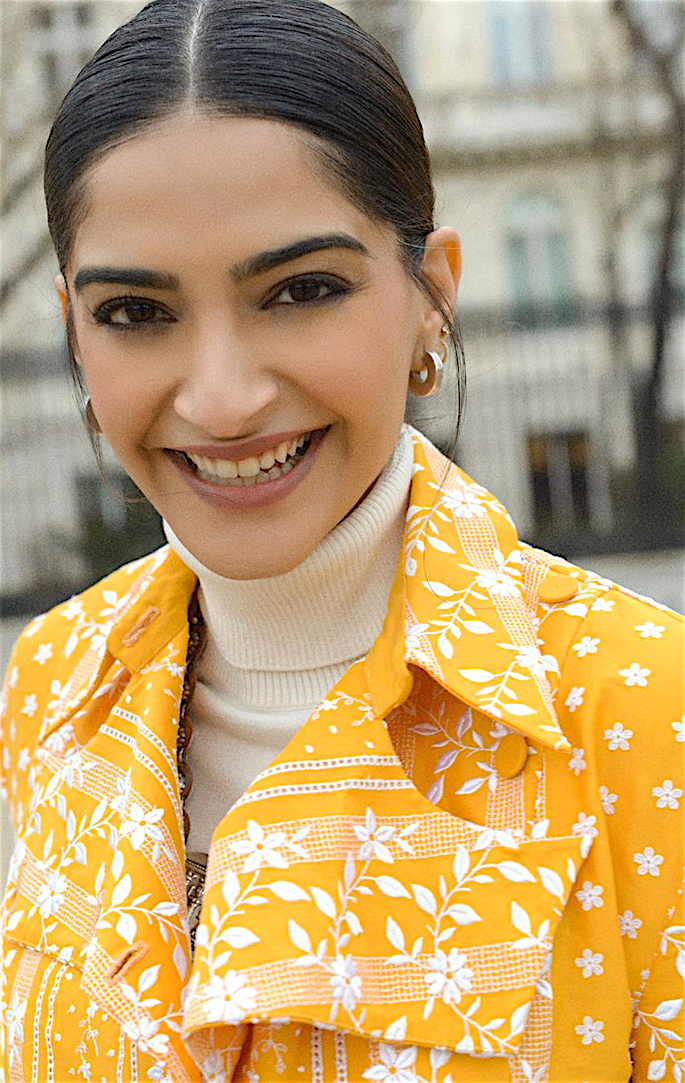 The starlet completed the look with a sleeked back braid and soft yet glam makeup.

Sonam Kapoor proved that vibrant colours do not need to be saved for summer, they can be worn all year round.

It comes as no surprise that Sonam is one of Bollywood’s best-dressed celebrities.

She continues to impress with her innovative aesthetic choices both in India and across the world.