"The Ferryman’s Tale epitomises my personal journey and evolvement as designer."

Paris made room for Indian designer Rahul Mishra to become the second Indian fashion designer to present his collection at the city’s most fashionable event, Paris Fashion Week (PFW).

Echoing Manish Arora’s success, who was India’s first fashion designer to feature at PFW, Mishra has brought an East Asian twist to the runway for his Spring/Summer 2015 collection.

For any of our DESIblitz readers who also happen to be literature lovers, particularly that of poetry, Mishra too appears to be a fan of poet Rumi: “Love  calls—everywhere and always/We’re sky bound/Are you coming?” 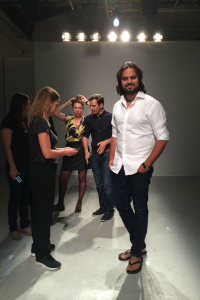 Mishra succeeds in captivating his catwalk onlookers by using Rumi’s poem as his source of inspiration behind authoring ‘The Ferryman’s Tale’.

33 year old Rahul Mishra is originally from Kanpur, Uttar Pradesh. Upon speaking about his collection, Mishra explains: “The Ferryman’s Tale epitomises my personal journey and evolvement as designer.

“Every destination I have reached has always increased my quest to a greater design sensibility and cause to uphold the richness of India’s textiles and craft.”

He continues to talk about India stating: “When I look at my country and see so much unemployment, I want to use fashion as a tool to empower my people. What creates the strength is when multiple hands come together to create beauty.”

In February 2014, the designer from Delhi was victorious in winning the 2014 International Woolmark Prize (IWP) at Milan Fashion Week, subsequently making him the first ever Indian designer to win such an award.

To be eligible for such a prestigious award, designers must incorporate 80 percent merino wool into their garments. 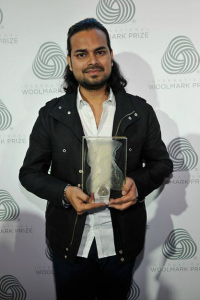 But this award is not just any old award, no. It has claimed the assistance of heightening the careers of leading fashion designers Yves Saint Laurent, Karl Lagerfeld and Giorgio Armani.

To be in the same award category with some of the industry’s most famous fashion designers can only mean Rahul Mishra is on the path to bigger and better things:

“Our ultimate aim is to create a product not just for consumption, but to design a system for maximum participation for the villagers and the artisans, in order to sustain their livelihood,” Mishra explains.

Now officially an award winning designer and with history made, Mishra’s carefully crafted garments have risen in popularity after his IWP success saw a sellout of his clothing within weeks of being displayed in Paris’ leading boutique Colette.

In keeping with making history, Mishra was also the first non-European designer to be awarded a scholarship in 2009 with fashion institution Istituto Marangoni, which is based in one of fashion’s most iconic locations, Milan, Italy.

Paris really were saving the best until last with the nine day event presenting Mishra and ‘The Ferryman’s Tale’ on the last day of Paris Fashion Week Spring/Summer 2015.

Fahmida is a fashion enthused English & Media graduate. Her creative discipline has heightened her aspiration of becoming an established fashion and lifestyle writer. She likes to follow the motto “Be who you want to be, not what others want to see.”