Not all Cereals Good for You

Cereals are a popular and healthy option for breakfast but Which? has found that not all cereals are good for you

Hot cereals and muesli were not included in the tests

The UK consumer organisation Which? has produced an outstanding report about breakfast cereals and ranked them in terms of how good they are or not for you. The usual impression is that all breakfast cereals offer a good balanced start for the day, however, Which? has found some stark facts about the levels of sugar and salt in some of the popular cereals.

Which? from their research claims four out of five people want to eat more healthy but they are not being able to make the right choices due to inconsistent information. Which? has been highlighting such issues for years to the government and the food industry to do more to assist consumers to have more healthy eating choices.

Naturally, every person is responsible for what they eat but without the right information the task of choosing the right foods versus the wrong ones is further impaired, when the foods such as cereals, are actually not as healthy and are being advertised as healthy options, especially, for children.

Many of the cereals out of the 100 that Which? analysed have not been impressive in terms of fat, saturates, salt and sugar levels. In the UK, cereals are a major source of food  for breakfast compared to Europe. So, to find out that some of the cereals are not as good for you, is a worrying factor. 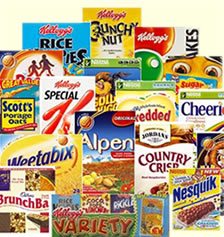 The cereals chosen by Which? were in terms of popularity and market share in January 2009. Hot cereals and muesli were not included in the tests because they are not a major part of the overall market share.

Which? applied the Food standard Agency’s traffic light labelling system in their final report to indicate which cereals were high, medium or low in sugar, salt, fats and saturates. Red being high, amber medium and green low.

The analysis by Which? also included use of the FsA’s nutrient profiling scheme to establish whether products are a healthier or less healthy option. The FsA created nutrient profiling as a means to classify foods that should or should not be targeted at children via TV advertising.

Below is the actual breakdown report by Which? showing you all the breakfast cereals they analysed and the outcome based on a 100gram serving. You can use the navigation controls at the top of the report view it as desired.

Link to the report Full Breakdown of Cereals

The report says that subject to current trends, approximately 60% of the UK population will be obese by 2050. Leading to further health problems including heart disease and type 2 diabetes. This will incur an estimated cost of £49.9 billion a year of public spending.

Heart disease and diabetes are two health problems that are high in British Asian communities. Therefore, a report like this is very valuable to help desi people make more health concious decisions when it comes to cereals. Especially, for children because the earlier better eating habits are introduced, the easier it will be for them to enjoy a healthier lifestyle.

Further to the findings by Which? action is needed by the government, the food industry, manufacturers, retailers and catering services to address this growing problem to avoid the health problems outlined by the report.

What is your view on the report, are you surprised by the findings? Or are you not bothered by the levels of sugar, fats or salt you consume?

Baldev enjoys sports, reading and meeting people of interest. In between his social life he loves to write. He quotes Groucho Marx - "The two most engaging powers of an author are to make new things familiar, and familiar things new."
Wii Fit Aunties
Increase Metabolism and Lose Weight