An Indian girl shared a post on social media where she confessed to cheating on her boyfriend, claiming that he is “not good looking”.

"I got physically involved with one of my friends."

An Indian girl has caused controversy on social media after she admitted to cheating on her boyfriend.

The young woman took to Corporate Stories Confessions, an open Facebook page. She revealed that she was having an affair and went on to say that her boyfriend is “not good looking”.

She also said that his salary is not very high and that he does not own his own home.

The young woman wrote: “My boyfriend is not good looking. He is a loyal person, doesn’t drink, smoke.

“He is very much possesssive about me. He got angry when I talk to any other male friends. He wants to spend time with me.

“He is only 25, his salary is 20k. I am not happy with him. As he is coming from village area, I live in city due to job issues. He lives in a rental house.

“I am not sexually attracted towards him, I am in a relationship with him due to my destiny. Many astrologers told me that he is my future husband.

“Initially, I don’t trust it but later maximum astrologers told the same thing.”

The Indian girl then says that her boyfriend is a good person and that her parents want her to marry him, however, she explains how her personality differs from his.

“He is loyal and good husband material. My parents love him a lot, they want me to marry him. After 2 years, 2022, he wants to do registry.

“I got suffocated with him. I am a party lover, outspoken, friendly girl. I can’t love him.”

She then revealed that she has been cheating on him with one of her male friends.

“Now I start cheating on him. I got physically involved with one of my friends. He is attractive. He is smart. He is loyal. He doesn’t know about my boyfriend.

“After so many years my sexual drive is increased seeing him. I am soooo much happy.

“I don’t want to leave this guy, but I have to marry my boyfriend as I have promised him. He is very sentimental person. If I leave him, he will definitely harm himself. I don’t know what to do.

“My father is a very intelligent person. He wants me to marry my boyfriend. He convinced me you will happy with him because he loves you.

“He is no doubt a good guy. His salary scale is low. He doesn’t have his own house in the city. I have to spend all my life in a rental house. I hate this.” 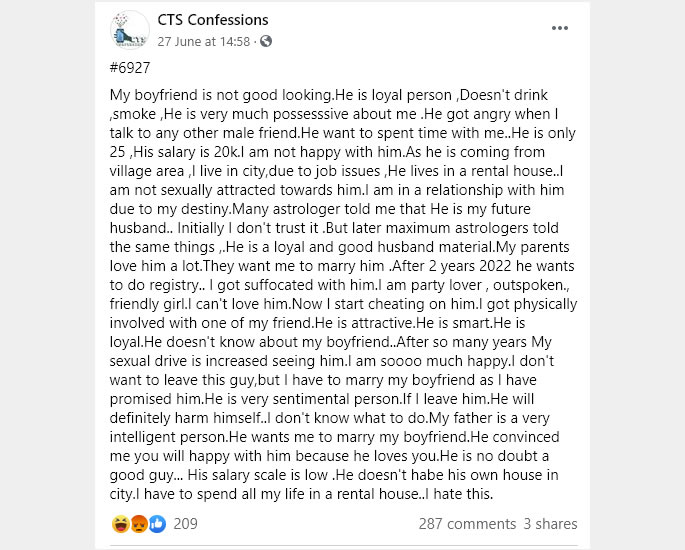 The post received a lot of attention and naturally, many people criticised the Indian girl’s actions, saying that her boyfriend deserves better.

Others called her a golddigger who is more interested in materialistic items.

Another posted: “Pls leave that good person. He deserves better. Tell him you cheated and break up. Pls don’t hurt him more by stating he is not attractive.”

Some users advised the Indian girl to tell her boyfriend as it will ruin her life if she gets married to someone she doesn’t love as well as his.

Dhiren is a journalism graduate with a passion for gaming, watching films and sports. He also enjoys cooking from time to time. His motto is to “Live life one day at a time.”
10 Ways to use Turmeric in your Beauty Routine
Aiman Khan reveals how she Lost weight after Pregnancy