The popularity of video games being used for ‘exergaming’ has come to the forefront with the Wii Fit. DESIblitz wanted to test its usability with some South Asian ‘aunties’ – women usually in their late forties and onwards. So, a small group of ‘aunties’ from the West Midlands in the UK, were introduced to ‘exergaming’ on the Wii Fit.

Fitness amongst the South Asian population in the UK, is a major concern, therefore, gauging the reaction of the older generation using the Wii Fit for exercise was of special interest to us. With the younger generation of British Asians use to gaming consoles as part of everyday life, this social experiment was specifically aimed at the older age groups and in particular, the typical  ‘aunties’ of our community.

The Wii Fit is a gaming device created by Nintendo, a company that started as a playing cards manufacturer in Japan, in 1933, and evolved to a household name in electronic gaming consoles. The Wii, the actual console used by the Wii Fit product, was launched by Nintendo in December 2006. It fast became popular due to the use of hand-held controllers and body movements to play its games rather than gamepads.

The Wii Fit, released in December 2007 initially in Japan, took the Wii concept to a major new direction – aiming it at the whole family for exercise and fun. The Wii Fit  consists of add-on device called, the Balance Board, which is a white rectangular plastic board required to play Wii Fit games. 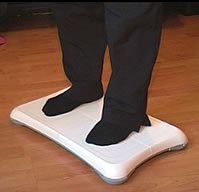 The Wii Fit board uses electronic sensors to determine the position of a user by measuring how much pressure is put on the board. These inputs are used for an exercise regime consisting of various mini-games. These include various yoga exercises, jogging, aerobics such as hoola hoops, and all sorts of other activities. Designed to improve the muscle conditioning, balance, stamina and aerobic ability of the user.

For the full Wii Fit fitness programme, a user creates a profile called a Mii. This records the height and weight of the user and calculates the BMI (Body Mass Index). The profile is stored by the Wii Fit and is then used to monitor progress.

Diet is a key cause of health issues amongst the British Asian communities due to high use of salt and fat such as butter, ghee and oil, in South Asian cooking. These cooking habits are ingrained in the older generations due to dishes made this way back home, especially, in India, Pakistan and Bangladesh. However, compared to the UK, hotter climates, fresher ingredients and more outgoing and physical lifestyles in those countries, help maintain health and weight more easily.

Regular exercising is not something that has been high on the agenda for older generations of South Asians because it was not something they did much of back home, when they came to the UK. But this is gradually changing.

Today, the importance of exercise and changes in diet continue to make progress amongst these communities. As part of our interviews, we quizzed the ‘aunties’ about their eating habits and typical exercise routines, as well as exposing them to the Wii Fit. Watch what happened and the outcome of our challenge in the ‘Wii Fit Aunties’ video below.

We can gladly say that we were very enthused with the result and admired the willingness of the women to openly taking part in our ‘exergaming’ challenge.

For example, Rani (age 49) said that the Wii Fit is good and it can be used night or day, Inderjit (age 46) said it is good to use in a group or in your own home, Ramila Patel (age 58) said she liked the jogging and yoga exercises, and Tej Kaur (age 58) who enjoyed using it a lot, said the Wii Fit Yoga exercises would be very beneficial to her.

From this small but worthwhile trial of the Wii Fit, we found it’s something that the older generation would be willing to use and not reject because of its association with consoles used only for playing games. By using it as an exercising aid they felt it could potentially provide major health and fitness benefits, and also give a lot of enjoyment at the same time.

Do you use the Wii Fit? If so, does it help you exercise? Do older people in your family use it too? What did you think about fitness and diet amongst desi people? Let us know!

Wonders of Threading
Not all Cereals Good for You