Artwork by Mohsin Shafi & Saadia Hussain in ‘No Man’s Land’

"A Photograph for me is a way to tell a story and evoke a feeling."

Mohsin Shafi and Saadia Hussain, two young artists from Pakistan exhibit an amalgamation of their artwork titled: No Man’s Land at the Nomad Gallery in Islamabad.

The exhibition highlighting social issues and personal memories began on December 15, 2018, and will continue until December 31, 2018.

The 16-day presentation features a blend of mixed media, consisting of text, photography, painting and collections. The exhibition capture images that reflect the past, social relations and the inner soul.

The thought-provoking show creates a warm evocative narration from both an individual and collective vision.

Nageen Hayat, the exhibition curator and director of the Nomad Gallery said:

“Intrinsically linked, the forms in the both artists’ work aim to create an interface between seemingly divergent understanding of assimilation and culture, reflecting a very personal ideology as well as a fluid sense of self, moving between text and image, the sacred, the mundane, and the profane.”

The dynamic duo of Mohsin and Saadia are both Master graduates in Visual Arts from the National College of Arts (NCA) in Lahore.

Let’s take a closer a look at the two artists exhibiting No Man’s Land.

Originally from Sahiwal, Mohsin Shafi is an interdisciplinary artist who continues to work and reside in the heart of Pakistan, Lahore.

He is an advocate for carving space, often forging a link between art and activism to survive in Pakistan’s edgy creative environment.

Shafi is not new to exhibitions, having done over 50 in Pakistan and across the world.

The work of Mohsin generates a unique form of communication about social issues, connecting art with those who respect and love it.

His expertise lies in the fusion of mixed mediums including collages, prints and installations.

Shafi shared several pieces of his artwork exclusively to DESIblitz. Some of his art does promote a self-created world, whilst others are more serious, addressing many social issues.

His work seems to be caught in the middle of two different worlds, ending in a No Man’s Land.

Mohsin presents artwork, which draws musical influences. Many of his collages have the same or similar name as a single, album or a lyrical poem.

All of them are hand cut paper collages using mixed mediums in synthetic frames which look like different mirror images.

In the piece, ‘Another one bites the dust’ Moshin highlights spirituality and the failure of some people using illegal and harmful substances such as drugs.

With this specific artwork, he displays famous monuments, alongside a combination of astrological numbers in the background. There is perhaps sexual implications to this piece.

In another collage, it seems Shafi found inspiration when milking a cow in the rural areas of Punjab.

Though the collage does show a contrasting perspective, the meaning could be the same. The interesting aspect is the different languages in the text surrounding the backdrop.

‘Good Old-Fashioned Lover Boys’ shows a man in the form of a puppet.

The puppet who can be mistaken for a watchman or a guard has a bohemian sense of fashion.

‘Peeli Patti, Raja jani aur guru 420’ and ‘Deeply Dipply’ depict the harsh realities of the world and the highs and lows of life.

Other pieces of art include ‘Up above the world so high,’ indicating possible oppression. And ‘I might have been a Queen’ seems to be a story about someone’s life.

Talking about his art on a more deeper level, Mohsin told DESIblitz:

“My visual metaphors combine realistic portrayals of ordinary events with elements of myth, to allow myself the luxury of a disconnection from the fallacies of truth.

“Hoping to record the naked and defenceless ideas of the subconscious mind, somewhere between dreams and their documentation.

“I use the worn, the used, the almost invisible. These small, unique, yet ordinary things. I, therefore, investigate the dark recesses of the relevant human psyche, to explore a reality of ghouls and monsters.

“This I assume to be an effort to recreate my world, in a no man’s land.”

“The work is based on personal snapshots, images from old compendium, borrowed from acquaintances and some even stolen from social media.

“These are in my opinion, disturbing interpretations of familiar subjects, slumbering histories and buried traumas.

“Through a play with an existing library of image and text, I attempt to communicate multiple interpretations of the one true meaning.” 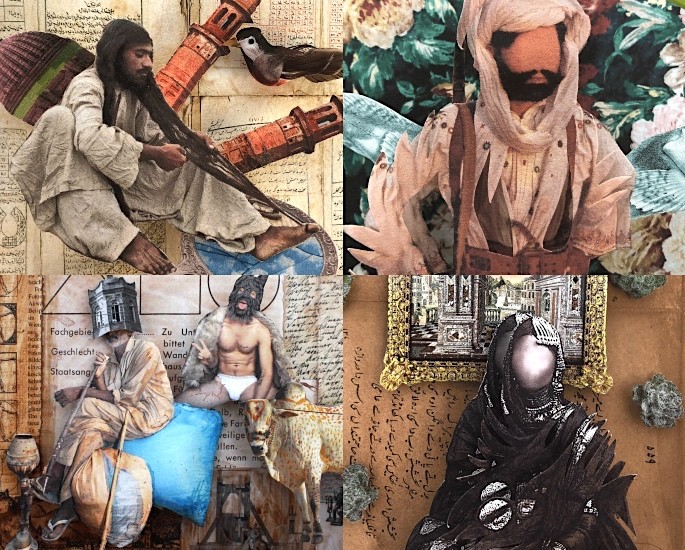 Travelling, speaking to various people and listening to different ideas certainly has a contributing factor in Shafi’s art. 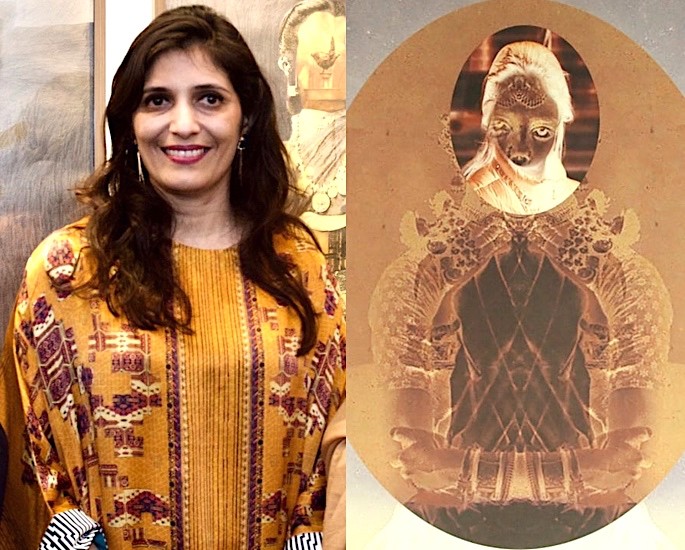 Despite belonging to a family from Manshera in Khyber Pakhtunkhwa, Saadia Hussain also lives and works in the ‘Pearl of Punjab,’ Lahore.

Similar to Mohsin, she has displayed her work across the three major cities of Pakistan – Karachi, Lahore and Islamabad.

She also took her solo show ‘The Land of Peacocks’ to Syra Art Gallery, Washington, USA.

She has built an archive of photographs which she has obtained from family members when visiting them.

Few of the photographs date back to the pre-partition days, while others are post-partition.

With some of the images going way back in time, even Saadia does not know who features in them. She can only go by what she has been told by the elders who are still alive.

Using images of ‘Unknown Soldiers,’ she produces the experience of a complicated reality.

She has even painted women in royal outfits, wearing lavishing jewellery, along with simple traditional women.

In many of the images, she has blurred faces and spaces.

She also went onto implement the overlapping technique to portray the distress, warmth and the strength of women in a male-dominated society.

A statement from Hussain about her artwork reads:

“My work is focused towards translating the pictorial language and interpretation presented by photography into my own visual vocabulary.

Vintage family photographs, both monochromatic and other mediums such as photo construction, and paintings are the means to create my work.

“In addition, my images have been part of blurred space by overlapping figures, and the use of military history to create the illusion of a complex reality.”

“A Photograph for me is a way to tell a story and evoke a feeling.

“My goal is to translate history into a story of which fantasy is an essential element.”

Hussain’s creativity works well with that of Shafi. 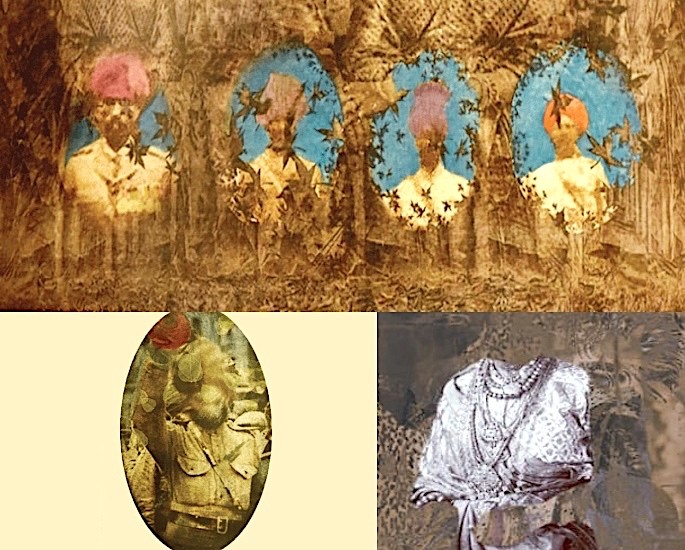 Admirers and collectors of art will enjoy this exhibition that caters to the twin cities of Islamabad and Rawalpindi.

The two artists have no plans for taking the exhibition to other parts of Pakistan. However, people from the bigger cities are expected to visit Isloo.

Shafi and Hussain are raising the level of artwork in Pakistan with interestingly new ideas. They are also pushing their creative boundaries at the same time.

No Man’s Land showcases the brilliant work of Mohsin Shafi and Saadia Hussain until December 31, 2018, at the Nomad Gallery in Islamabad.